Anti-Trump Super PAC Attacks Trump’s Wife in Ad – Then When Cruz’s Wife is Exposed, She Claims the Truth “Has No Basis in Reality”

I’ve often been asked if the wives of those seeking political office are fair game for political scrutiny. My simple answer is “Yes, but only if they have actually involved themselves in things that the people should know about.” Such is the case with Heidi Cruz, but not necessarily with Melania Trump.

To clarify, I think Melania’s past photo shoot where she is nude does show something of her previous character. If that has changed, then good. However, the Make America Awesome super PAC, has recently put out an ad with the now famous picture of Melania posed nude aboard an airplane on top of fur. The picture is Playboy-esqe in nature and was taken some years ago (2000) for GQ magazine.

The ad by the super PAC was titled “Meet Melania Trump, your next first lady. Or you could support Ted Cruz on Tuesday.”

Once the ad hit, Donald Trump struck back via Twitter:

Lyin’ Ted Cruz just used a picture of Melania from a G.Q. shoot in his ad. Be careful, Lyin’ Ted, or I will spill the beans on your wife!

Of course, Ted Cruz didn’t say the ad was inappropriate. No, he justified it by saying the ad was not from his campaign and then said, “If you try to attack Heidi, you’re more of a coward than I thought.”

Pic of your wife not from us. Donald, if you try to attack Heidi, you’re more of a coward than I thought. #classless https://t.co/0QpKSnjgnE

Hmmm, so you don’t say it was inappropriate and call the PAC to pull the ad, but claim that Trump is a coward if he exposes the political and other dealings of your wife, who apparently doesn’t know how to keep herself at home? C’mon Ted!

I suppose I’m not surprised from a man that claims to have been converted to Christ at age eight and then says stuff like this in his late teens at a Baptist high school.

So, instead of Trump having to resort to the first step, one of his Twitter followers did.

@realDonaldTrump Let me do it for you. Heidi Cruz is a nutcase. This police report proves it. pic.twitter.com/RTcBW6vW8C

But, Trump didn’t say this and it’s not ridiculous. It’s a police report! Furthermore, we know of Heidi’s involvement in selling Americans’ out to China. We know she is part of Goldman Sachs and is only on temporary hold from them while Ted is campaigning rather than following the Bible, which Ted wants to put front and center, and be a “keeper at home” (Titus 2:5). We also know that she was part of drafting NAFTA (North American Free Trade Agreement), which saw thousands of Americans lose their jobs. We also know that she was a part of the Council on Foreign Relations, which her husband called a “pit of vipers.” Yet, he stood back and watched as she was a part of it, and he’s even claimed to be honored to hang out with Henry Kissenger.

I’m not sticking up for Melania Trump and her photos from 16 years ago. I think it is something a modest woman would not do. However, that’s almost two decades ago! Heidi’s “spell” occurred about ten years ago. Her ties with Goldman Sachs are still in place. Who knows what her ties are to the CFR today. We know that her husband has said he will place at least one CFR member in his cabinet, though the only issue for Cruz is his ineligibility as far as I’m concerned.

To be sure, I didn’t support Mitt Romney in 2012, but I had no problem defending his wife for doing what wives and mothers do, and that is primarily be keepers at home, loving their husbands and children and nurturing a future generation. Though I disagree with the theology of the Romneys, I can at least praise Mrs. Romney that she saw her place in the home and attempted to fulfill that for her husband and children.

At the end of the day, the wives of those seeking office should not face this kind of political attack unless they have actually been involved in the process. Melania Trump has not engaged in public policy. Heidi Cruz has.

*Original article title was changed to reflect that the Super PAC in question is not pro-Cruz, but anti-Trump.

UPDATE: So, this is Trump spilling the beans on Heidi Cruz? 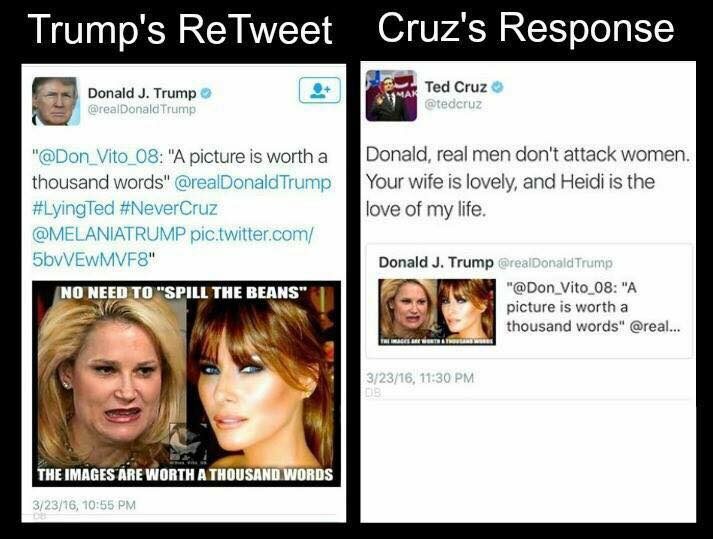 Seriously, I was expecting something with a little more substance. This is a childish response, in my opinion. And I give props to Cruz for a “kind” response. I can tell you that my response would not have been as kind to go with this kind of post.