A new bill that limits the murder of the unborn to 20-weeks and requires abortion clinics to meet basic medical standards has been officially filed in the Texas State House. HB 2 declares that the state has an obligation to protect the unborn.

“I am calling the Legislature back into session because too much important work remains undone for the people of Texas. Through their duly elected representatives, the citizens of our state have made crystal clear their priorities for our great state,” Perry said. “Texans value life and want to protect women and the unborn. Texans want a transportation system that keeps them moving. Texans want a court system that is fair and just. We will not allow the breakdown of decorum and decency to prevent us from doing what the people of this state hired us to do.”

The bill reads in part:

Lt. Gov. David Dewhurst thanked Perry and said in a statement: “I congratulate Gov. Perry for his decision to call a second special session to address the issues derailed by the actions of an angry mob in the closing moments of the first. Texas is unlike any other state because our leaders are willing to stand up in the face of pressure from Washington and special interest groups in the pursuit of freedom. I look forward to seeing the members of the Legislature on July 1st as we once again take up our charge to advocate for all of Texas and put the finishing touches on one of the most successful sessions in decades.”

This legislation comes just a week after Texas Senator Wendy Davis used a catheter to filibuster SB 5, a bill which required the standards be applied that HB 2 does. SB5 was to do the following:

Liberals couldn’t come up with their own slogan, so they borrowed one from the Rand Paul filibuster and wore shirts and held signs that read “Stand With Wendy.” You can see them gathered below: 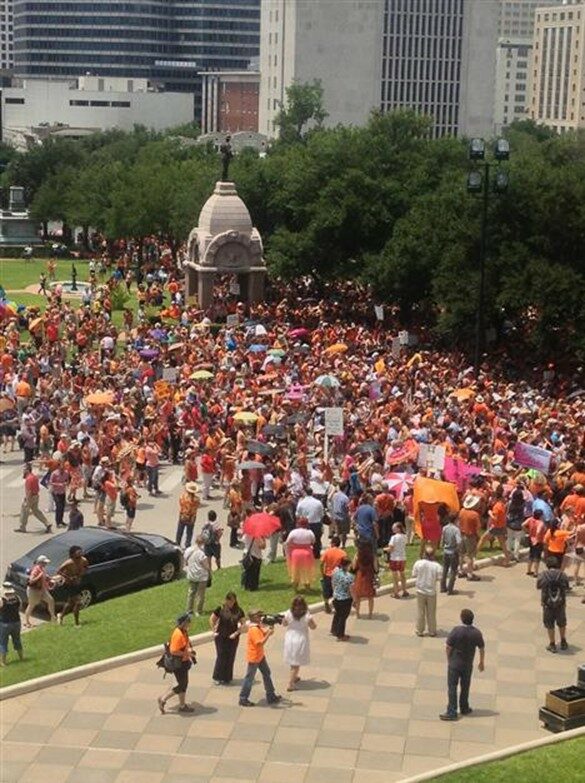 However, inside the Capitol in Austin, Pro-Life crowds gathered and sang “Amazing Grace” to drown out the protests of the pro-death supporters.