Exposing The Left's Demonizing Of The Modern Musket: Real Numbers Of Violent Crime In The US

With all of the calls for more gun control, I ran across some very interesting information that I want to share with you regarding the true statistics of violent crime in the United States. I think you will be shocked, or at least most will be at the real numbers. These are those kinds of numbers that were referenced by the likes of Gun Owners of America President Larry Pratt when he slammed CNN’s Piers Morgan recently, as Morgan attempted to demonize AR-15 rifles.

Often when numbers are thrown out by talking heads and politicians with an agenda they never cite their sources and if they ever do, usually the source has a particular agenda of their own. So, let’s ask what our own Federal Bureau of Investigations say about violent crime in America.

First, take a look at The FBI’s “Uniform Crime Reports.” These reports have been put out every year for a while now and you can reference back to 1995 on the current page.

Take a look at the 2011 report on Crime in the United States: 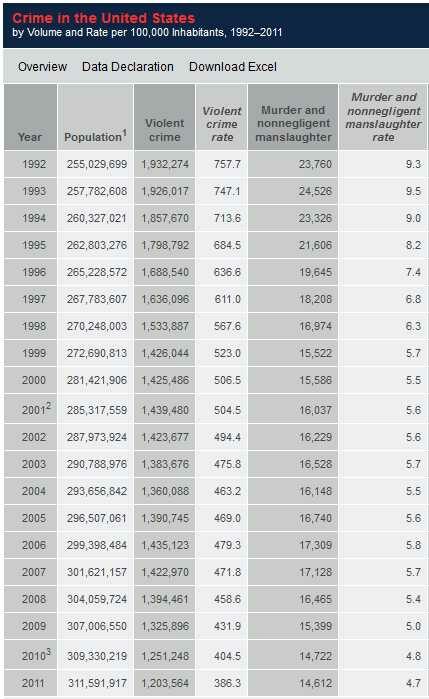 Notice that in 1992 the United States had a violent crime rate of 757.7 per 100,000. The murder and non-negligent manslaughter rate was 9.3 per 100,000. When you consider the numbers, we are talking an extremely small percentage.

Nearly 20 years later, would you think that the United States violent crime has increased or decreased, especially in light of the fact that there are hundreds of millions of guns in our country? If you said “increased,” you are wrong, dead wrong.

So why are the politicians and media types like Piers Morgan pushing a “fear” agenda on the American people? Why is there no one taking credit for a 50% reduction in violent crime in America?

I would think it is because the politicians have become “politically correct” and don’t want to actually have to deal with particular segments of the population, calling them out as the major troublemakers and instigators of violent criminal activity. So let’s take a look at where the violent crime we are seeing is coming from.

Table 16 of the FBI’s CIUS report for 2011 indicates where the trouble spots are.

Now if this is the case, why are everyone’s guns in jeopardy? Why must every law abiding American citizen be punished because of pockets of violent criminals who are not being dealt with adequately? It seems apparent to me that these areas should be the ones being targeted the most, and I don’t necessarily mean banning firearms, because in many cases these areas have the strictest gun control laws in the nation.

If you recall during the debate between Piers Morgan and Larry Pratt, Morgan attempted to deflect the argument away from the numbers Pratt was giving him, which were very similar to the ones above. Morgan wanted to try and compare America’s numbers to those of Great Britain. So how does England compare with the United States? Take a look at the Home Office Statistical Bulletin, which gives the crime numbers for England and Wales for 2011/12. Keep in mind that these numbers will be the lowest in the UK as separate crime stats are kept for Northern Ireland and Scotland, which have higher numbers than the ones in this report.

England and Wales have a combined population of about 56 million.

England and Wales does have a smaller murder rate than the United States, which is around 1.3 per 100,000. However, what we are not told in the discussion is what instruments are used to commit the murders or the violent crimes that are listed. Clearly the disarmed UK public has a higher rate of violent crime than the mass-armed citizenry of the United States. This is important, because from those of us who advocate that people be allowed to defend themselves, a firearm is the very best means of doing that. Additionally you carry a firearm in hopes that you never have to use it.

Additionally, keep in mind that in the United States we have 186 metropolitan areas where the population is 250,000 or greater. In the UK, they have only 32.

So what is the moral here? Less guns do not mean, less violent crime. In addition, as seen in the above reports for the United States, more guns does not necessarily mean more violent crime or more murders.

One last thing. We hear so much demonizing of the AR-15 rifle and how terrible it is. Well friends, according to the FBI’s CIUS report on Murder Victims by weapon, the total number of firearms used to commit murder in 2011 were 8,583.

This number is down by about 1500 from 2007 and I might add, without an “assault weapons ban.” The report also indicates the kinds of firearms used in these murders: Handguns, rifles, shotguns, other guns, firearms (not stated). Of the 8,583 murder in 2011 committed with a firearm, only 323 rifles were used. The AR-15 and other rifles, referenced as “assault weapons” by the Left, are a subset of that 323.

Put that in your pipe and smoke it liberal gun control advocates!

Rand Paul To Hillary Clinton: "I Would Have Relieved You Of Your Post"

Rand Paul To Hillary Clinton: "I Would Have Relieved You Of Your Post"