Emails are now confirming that Clinton Foundation donor Rajiv K. Fernando was placed on a sensitive intelligence advisory board for the US government, even though he had absolutely no prior experience in the field he was serving.

The emails further reveal how, after inquiries from ABC News, the Clinton staff sought to “protect the name” of the Secretary, “stall” the ABC News reporter and ultimately accept the resignation of the donor just two days later.

Copies of dozens of internal emails were provided to ABC News by the conservative political group Citizens United, which obtained them under the Freedom of Information Act after more the two years of litigation with the government.

A prolific fundraiser for Democratic candidates and contributor to the Clinton Foundation, who later traveled with Bill Clinton on a trip to Africa, Rajiv K. Fernando’s only known qualification for a seat on the International Security Advisory Board (ISAB) was his technological know-how. The Chicago securities trader, who specialized in electronic investing, sat alongside an august collection of nuclear scientists, former cabinet secretaries and members of Congress to advise Hillary Clinton on the use of tactical nuclear weapons and on other crucial arms control issues.

“We had no idea who he was,” one board member told ABC News.

Just so you know, CNN reported, “Rajiv Fernando has donated $9,400 to Clinton’s two White House bids — first her 2008 run and again this year — and has been a generous donor to Democrats running for the House and Senate and to President Barack Obama.”

Additionally, Fernando, who is a Chicago securities trader, has donated at least $1 million to the Clinton Foundation, according to its website, and he was appointed to the intelligence security advisory board in July 2011.

According to emails that ABC News received from press aide Jamie Mannina, he indicated, “I have spoken to [State Department official and ISAB Executive Director Richard Hartman] privately, and it appears there is much more to this story that we’re unaware of. We must protect the Secretary’s and Under Secretary’s name, as well as the integrity of the Board. I think it’s important to get down to the bottom of this before there’s any response.” 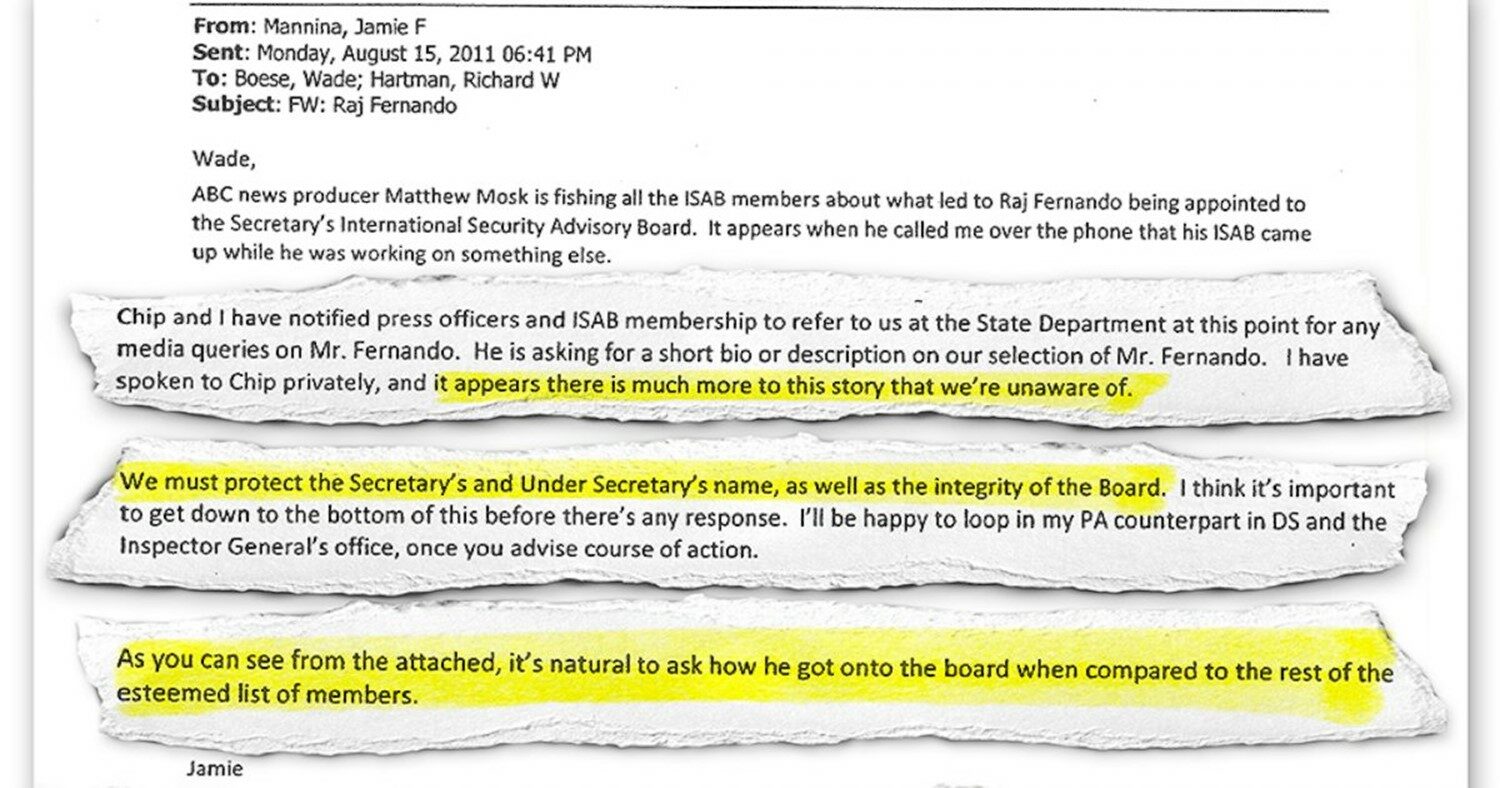 “As you can see from the attached, it’s natural to ask how he got onto the board when compared to the rest of the esteemed list of members,” Mannina added, referring to an attachment that was not included in the recent document release.

In another email from Wade Bose to Jamie Mannina, he wrote, “The true answer is simply that S staff (Cheryl Mills) added himâ€¦ Raj was not on the list sent to S; he was added at their insistence.”

So, he was just added by one of Clinton’s cronies, Cheryl Mills? Seems that is par for the course with the Clintons, right?

However, when ABC continued to press Mannina for answers regarding the appointment and credentials of Fernando, another email surfaced from Massachusetts State Rep. Harold P. Naughton, Jr., which read, “Cheryl Mills has asked that Jamie stall [ABC News] for 24 hours.” 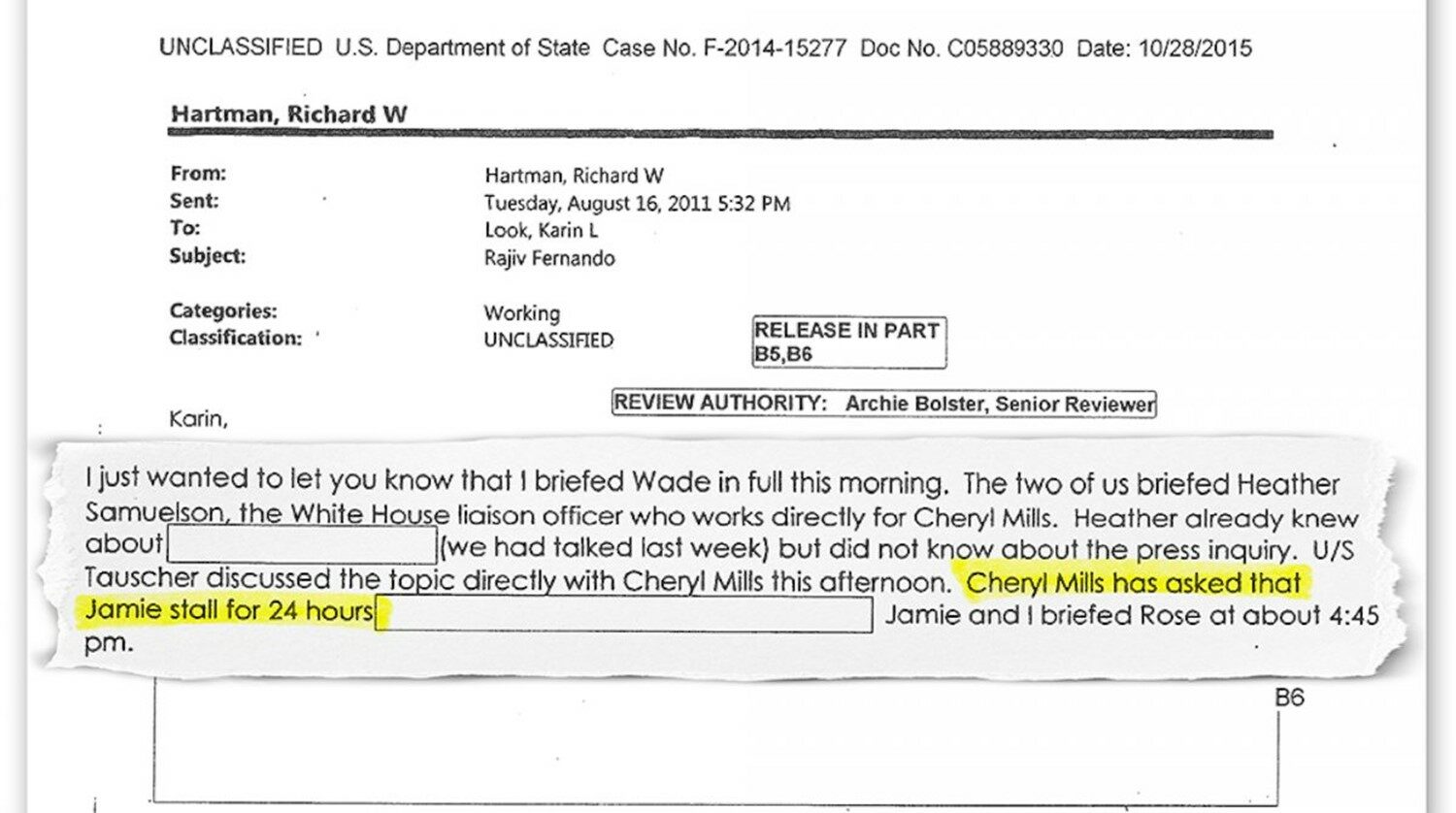 Before ABC News could get the needed information, Mills issued a public statement in which she announced the Fernando was stepping down from his position. It seems when these criminals in DC get caught, they seek to simply remove the person the finger is pointed at rather than be held accountable for their recklessness.

Fernando’s letter of resignation to Clinton says he “intended to devote a substantial amount of time to the work of ISAB in furtherance of its objectives. However, the unique, unexpected, and excessive volatility in the international markets these last few weeks and months require[d him] to focus [his] energy on the operations of [his] company.”

Additional emails collected from Hillary Clinton‘s personal server only hint at her possible involvement in Fernando’s selection to the board. The records request for documents about Fernando’s appointment produced a chain of correspondence from 2010 with the subject line “ISAB” — or International Security Advisory Board. In those, Mills writes, “The secretary had two other names she wanted looked at.” The names are redacted. Mills then forwarded the response to “H,” which is the designation for Clinton’s personal account. Three minutes later Clinton forwards the email chain to another State official and says simply, “Pls print.”

The Clinton campaign declined requests from ABC News to make Mills available for an interview. Campaign spokesman Nick Merrill deferred to the U.S. State Department, which issued a statement saying the board’s charter specifically calls for a membership that reflects “a balance of backgrounds and points of view. Furthermore, it is not unusual for the State Department Chief of Staff to be involved in personnel matters.”

Seems to me that this is a classic Quid Pro Quo if I’ve ever seen one. What do you think?

“One in a Billion Shot”: Sheriff’s Deputy shoots down Barrel of Robber’s Gun

Debt Insanity: Does Anyone In Washington Even Care That We Are 20 Trillion Dollars In Debt?

Debt Insanity: Does Anyone In Washington Even Care That We Are 20 Trillion Dollars In Debt?