This morning, Mac Slavo posted information regarding alleged Florida school shooting survivor David Hogg, a former FBI agent’s son.  That information was tied back to an interview from an August 2017 interview in which he went into a vicious anti-Trump rant.  Now, that video, along with several other videos of Hogg that have surfaced in the wake of the shooting are being methodically purged from accounts that offer an alternative or critique of those interviews rather than the mainstream news narrative.

Here’s a look at Hogg and Emma Gonzalez.

Two survivors of the Florida school shooting slam politicians’ responses to the massacre, calling them “disgusting” and “pathetic” https://t.co/XqjuNCCBvF pic.twitter.com/qNszGv95L6

Here’s the interview in question that, at this time, remains on Twitter.

First, take a look at this video in which it is clear that Hogg is reading from a script to push an anti-American, anti-Constitutional and anti-Second Amendment agenda.

Compare that to this clearly coached interview regarding the shooting.

The second video has become a target across Facebook and Google.

The Red Elephant reports on the purge:

Every video from any alt-media account regarding witness David Hogg and Emma Gonzalez containing alternative theories about their intentions or criticism of their media statements is slowly now being deleted from YouTube, and any accounts merely calmly questioning or criticizing Hogg and Gonzalez’s narrative are receive strikes against their accounts for “bullying and harassment” in YouTube’s words.  These accounts are also being dished out a ban from live streaming for 90 days.  Some are even getting their entire account shut down.

A source has told The Red Elephants that there are emails being sent in correlation with the ADL, CNN, and google who are allegedly coordinating this multi-platform shutdown of conservative and alt-media accounts. This order to remove all posts from YouTube and Facebook is seemingly being followed through on.

The video pointing out that Hogg is a paid actor became the number one trending video on YouTube. 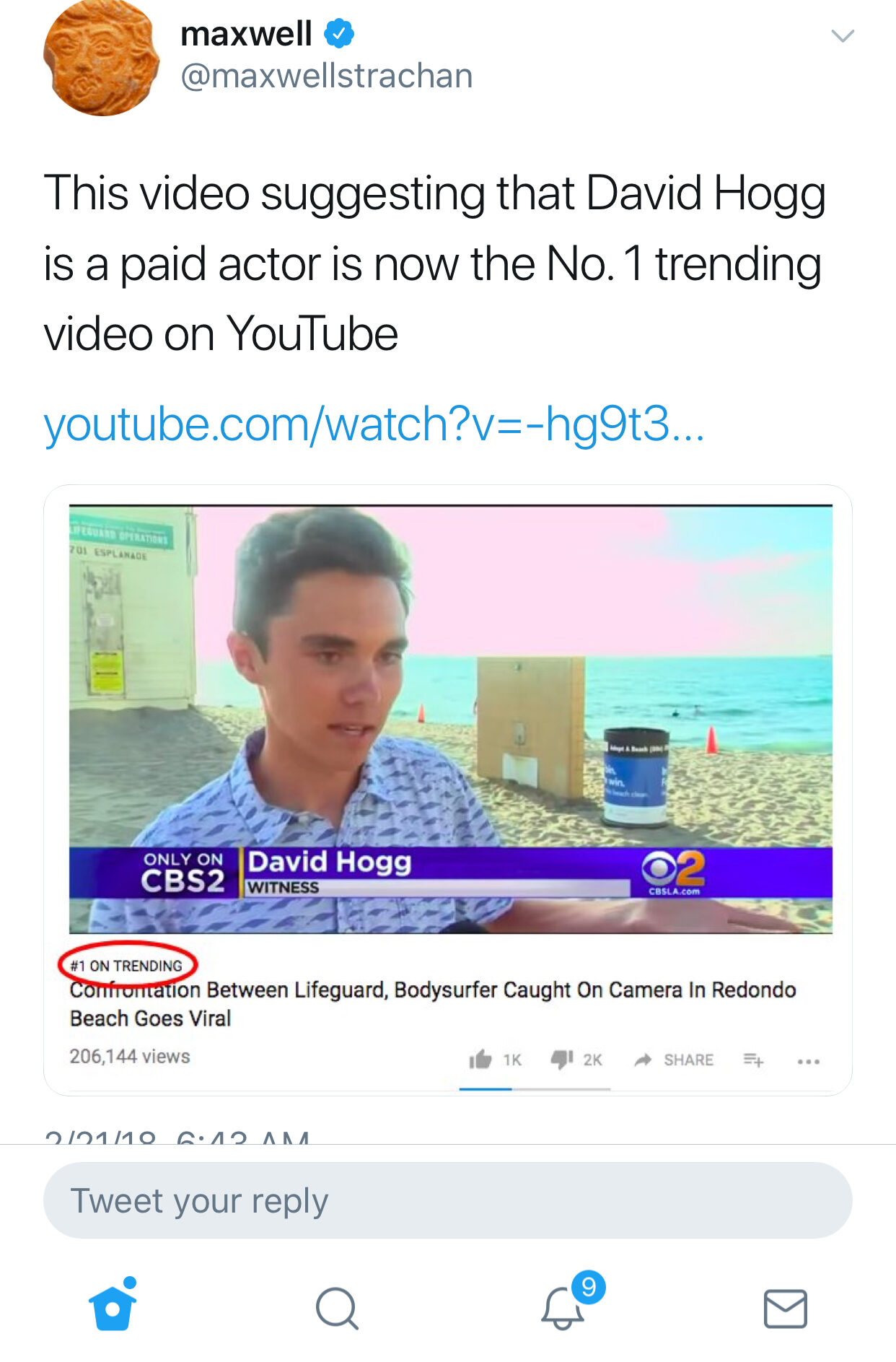 Of course, even as I perused YouTube concerning David Hogg videos, they were being removed right as I clicked on them.  As one example, take a look at the screenshot I grabbed after I viewed the video to make sure it was actually up and viewable. 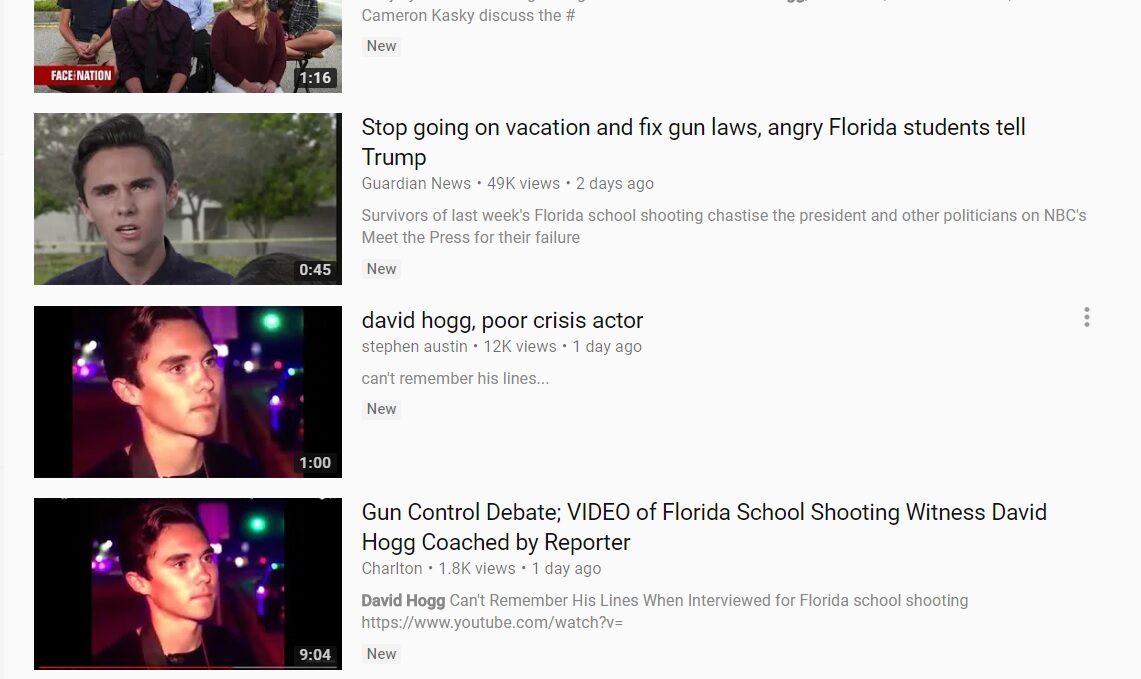 I then clicked on “david hogg, poor crisis actor” and discovered it had just been removed, and why?  Here’s YouTube’s pathetic reason. 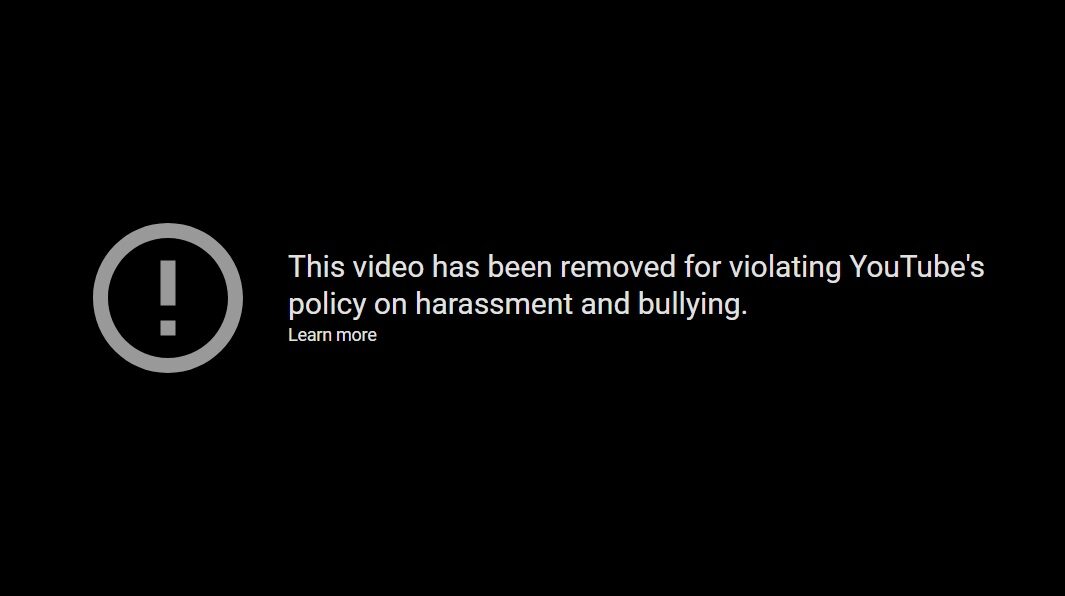 Seriously?  Harassment and bullying?  It’s just the video of Hogg not being able to recite his lines properly and being coached along the way.  He sure looked frustrated.  Perhaps, it was the title, that he is a poor crisis actor.

In either case, the videos continue to be reuploaded over and over.  YouTube cannot win this war.  They shouldn’t even try to, but they are because they are the gatekeepers.

However, YouTube is not the only social media platform providing cover for Hogg.  Facebook is at it, as well.

Again, from The Red Elephant:

We posted a screenshot of one of the videos regarding David Hogg being seen on a CBS segment in California last year on our Facebook page of over 300,00 followers.  It received three thousand shares within 21 minutes being removed by Facebook.

No warning.  No update. No email.  Nothing regrading the removal of the post was brought to our attention by Facebook.  This occurrence was mirrored across thousands of accounts all over the platform. 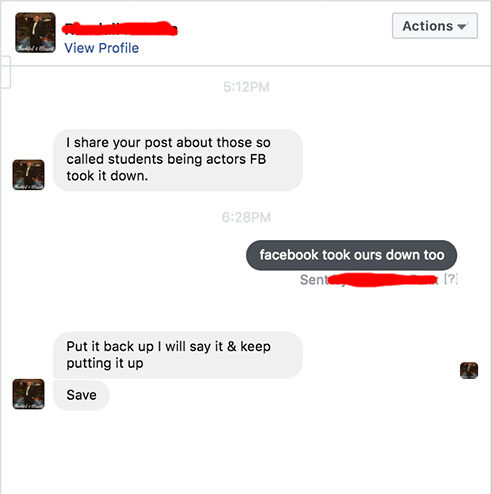 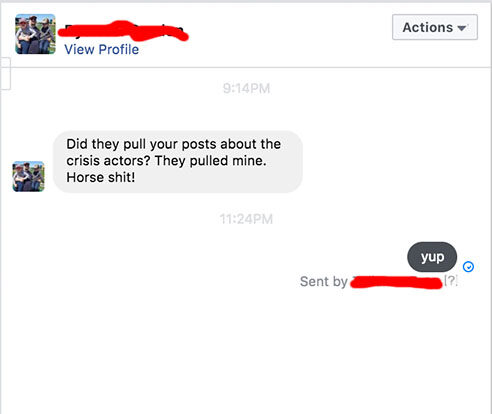 A reliable source has told The Red Elephants that a mass coordinated purge happening across the three big media platforms is underway and that this is not a coincidence.  According to the source, CNN, Twitter, Facebook, the ADL and Google are all working together on this massive attack against alt-media accounts.

Brian Stelter’s tweet regarding this makes this even more fishy…

Seriously, if there is really nothing to this, then why is there so much effort on the part of multi-billion dollar companies to shut up those who question the narrative they are being given.

Look, whether you agree that the Florida shooting was a false flag or not, whether you think it was all real or a hoax, whether you believe MK Ultra was involved or not, the fact is that this information should be in the public square for debate.  No one is being bullied and no one is being harassed.  The American people are simply having their information sanitized by Orwell’s “Ministry of Truth.”

Oregon Woman Survived 7 Days In The Wreckage Of Her SUV

Oregon Woman Survived 7 Days In The Wreckage Of Her SUV