Leave it to the ugly face of tyranny, Senator Dianne Feinstein (D-CA), to continue her question for America’s guns and their owners to be outlawed. Following the shooting at Los Angeles International Airport last week, Feinstein appeared on Face the Nation (Sometimes we just wish she would remove her face from the nation) and told host Bob Schieffer that gun prohibition legislation would probably not pass Congress because they are “hammerlocked” by gun owners and gun groups. However, it was her characterization of the weapon used that should make people sit up and take notice.

While she expressed he sympathies to the family of the Transportation Security Administration agent that was killed, she quickly dove into the politics. After all, nothing like waiting around to push an agenda. However, it’s the manipulative way in which she presented the information which makes one completely unable to take her serious as any type of authority on the issue of firearms. 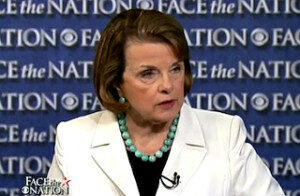 OK, stop there. The M&P-15 is a Smith and Wesson version of the popular AR-15, nothing more and nothing less. The M&P does stand for military and police. However, her claim that the weapon is “clearly designed not for general consumption” is ludicrous. M&P is a product line of Smith and Wesson. They have a variety of caliber of handguns and rifles that are also part of the M&P line which are available to the general public and part of what is to be protected under the Second Amendment.

Feinstein is either ignorant or lying, or perhaps she is both. She is attempting to portray this weapon as somehow illegal for American citizens to own.

Hello, Mrs. Feinstein? Governor Jerry Brown vetoed legislation that would have outlawed this rifle just weeks ago. One wonders if she is in touch with reality at all.

Again, Senator Feinstein wants to engage in treason against the Constitution and the people of the United States because her desire is to craft legislation at the federal level to restrict and prohibit guns. She knows it won’t pass though, as demonstrated earlier this year when the Democrats had their proverbial backsides handed to them on gun prohibition legislation.

“I think there’s a hammerlock on the Congress by the gun owners and the gun people, and it doesn’t matter,” she said.

Well you don’t say? At least on the issue of guns, most Americans get it. That little part about “shall not be infringed” is applied to Congress, Mrs. Feinstein. In other words, the federal government was given no (that’s zero, zip, nada) authority to restrict or regulate arms. Yet, representatives. like Dianne Feinstein, continue to usurp power when it has not been given to them.

Last year, Feinstein, along with Senators Manchin (who admitted to taking money from Michael Bloomberg) and Toomey faced dismal failure in the United States Senate with their proposed gun prohibition bills. However, just because Feinstein doesn’t think it will pass Congress, don’t underestimate a socialists mentality. She will bring up new legislation and so will her colleagues. We must be ready to stand against it.

Infecting a Nation for Politics and Money

Measles Police State: “Parents who do not vaccinate their children should go to jail”

Measles Police State: “Parents who do not vaccinate their children should go to jail”