If you are like me, you are asking, how is this even legal and how did they acquire the information they are going to be teaching?  Yet, the University of North Texas is actually teaching a lesson on “sexual pleasure and response in infants.”

The report comes by way of Big League Politics‘ Patrick Howley, who reports that the lesson was taught by Terry E. Davis.

The syllabus is titled “PSYCHOLOGY AND SEXUAL BEHAVIOR.”

During the course, students will be immersed in such topics as, “gender issues,” “sexual arousal and response,” “sexual behaviors,” “sexual orientations,” and three presentations on “sexuality during childhood and adolescence.”  Oh, and just before finals, it’s three lessons on “sex for sale.”

Does anyone see the sexualizing of your kids and young people going on here?  I certainly do.

Howley provided a photograph from a “campus tipster.” 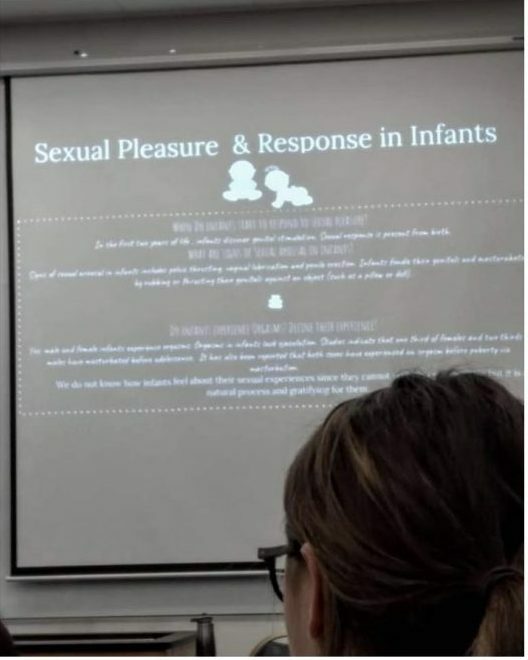 The obvious question is where the information being presented was obtained.  We already know that beyond an opioid epidemic, America’s children are far more susceptible to sexual exploitation, sex trafficking, and sex abuse.  It is a great evil in our nation that we seem to be drowning in.  Yet, the University of North Texas is conducting sexuality courses that include talk about infants and sexual pleasure and response.

Howley is now waiting for a response from the university about the lesson which was hosted by the university’s psychology department.

Why are parents who are often paying tuition not up in arms about this being taught?  Maybe they are too indoctrinated in the ways of the state now to even care about the demoralization of their own children, even grown children.

Muslims Emboldened: List Of Islamists Looking To "Represent" You in 2020 (Updated)

Muslims Emboldened: List Of Islamists Looking To "Represent" You in 2020 (Updated)