Congresswoman Sheila Jackson Lee (D-TX), who has been rumored as being considered to replace Janet Napolitano to head the Department of Homeland Security, used some very strange language earlier this week to characterize a sentiment for a clean resolution to end the government shutdown. She labeled it a form of “martial law.”

Yes, we have heard Ms. Lee say some whimsical and ridiculous things in her time in office, which I’m sure embarrass her fellow Texans, but this has to be one of the most ridiculous ones to date.

She pushed that the measure was bi-partisan, including Democrats and Republicans.

“It’s something called a continuing resolution, but it’s a bill that you put on the floor that has been passed already by Republicans and Democrats in the United States Senate….that we could vote on today,” Lee said.

“We have martial law — what that means — and my colleagues know what it means — is that you can put a bill on in just minutes,” she added. 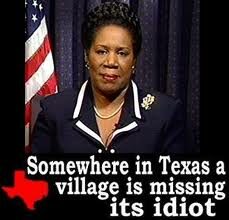 What in the world does martial law have to do with a government spending bill? Is this implying that Congress can just willy nilly pass a law to do whatever they like, in any manner they like, constitutional or unconstitutional? I think Ms. Jackson better check her 6 if that is the case. I see truckers and vets coming to town who would disagree with her.

The term “martial law” in a legislative context is somewhat obscure but it has been used before to define lawmakers’ ability to “fast track” bills without going through the usual congressional process.

However, Lee’s insistence that a Senate-approved resolution to fund the federal government be fast-tracked via “martial law” appears to conflict with Article I, Section 7, Clause I of the Constitution, which states, “All Bills for raising Revenue shall originate in the House of Representatives.”

This clause was included by the founders to ensure that decisions related to the power of the purse reside with the legislative body which is closest to the American people.

The last time martial law was mentioned by a member of Congress was back in 2008 when Rep. Brad Sherman revealed how lawmakers were threatened with “martial law in America” by then Treasury Secretary Henry Paulson if they rejected the TARP bailout package.

So I was right. As Darla points out, it is a means of dismissing the Constitutional process and the law in order to push whatever Congress wants, whether it is lawful or not. Sheila Jackson Lee is among the most lawless witches in Congress. She is among many socialists and communists on the House Oversight committee in the House of Representatives, and she is more than in favor of grabbing your guns and stealing your right to own them. Why should this surprise us that she would use such terminology? I’ll let the reader decide, but I have my own theories.

Beware, Ms. Jackson may have given a signal about what the Communists and socialists in the House, along with their comrade in the White House has planned.