Dana Safety Supply, a major distributor of weapons and accessories to police departments and civilians across the United States, has declared that they will no longer sell semi-automatic rifles to civilians. Instead, they will only sell to law enforcement. This prompted Oconee County, Georgia Sheriff Scott Berry to write them an email in which he told them he would no longer be seeking them out to purchase products for his department based on their decision. 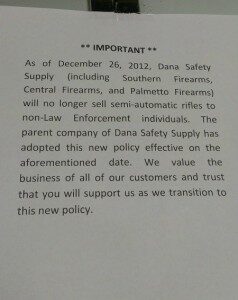 Sirs, It is my understanding that you have stopped selling self loading rifles to members of the general public in favor of selling them to law enforcement officers only. I deeply regret that decision. As such, this agency will no longer seek bids from or purchase from DSS. Thank you for your time and attention to this email. Sheriff Scott Berry

A call to the headquarters of DSS resulted in a political answer of “we appreciate your call, but are in the midst of consulting to form a proper response.” They would neither confirm nor deny the report when called on Friday. Apparently their website and postings outside their businesses are more forthcoming than their headquarters. 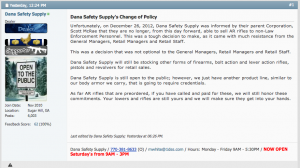 My hat is off to Sheriff Berry! In fact, Berry popped up on Fox Business for an interview.

When asked if it would “make his job easier” if “assault” rifles weren’t being sold and “out there,” Sheriff Berry responded by correcting the host that they were semi-automatic rifles, not assault rifles. He then went on to point out that there were millions of these weapons in America, but that “statistically an insignificant number of them are used to commit any kind of crime.”

When the host asked why take the term “assault rifle” off the table, the Sheriff responded by stating that the definition of the term is as “wide and as broad” as the building he was sitting in. The Sheriff described that an assault weapon was a military weapon that was designed for military purpose. “Semi-automatic rifles just aren’t assault rifles,” he said. “You can call them that, but that’s just not what they are.”

The host then asked Berry what his reaction to the Brady campaigns’ rating of an 8 out of 100 on Georgia’s regulations on firearms was. According to the host, who was citing the Brady campaign, the reasons for the low rating was because there was “no limits on gun purchases, no required background checks for gun show purchases, and no ban on ‘assault’ weapons,” Sheriff Berry said that he was “hoping to shoot for a lower number than that.” He did address the issue of the supposed “required background checks at gun shows” by stating that “law abiding citizens can sell guns in the parking lot or on the floor of a gun show.” He doesn’t know where they get the idea that it’s required to do a background check. He was emphatic in stating that he can sell his gun to anyone else no matter where he is at. The Sheriff rightly pointed out that one goes through the same process if they buy a gun through a dealer at a gun show that someone goes through at a standard brick and mortar store to purchase a firearm. He called the Brady statement concerning gun shows a “scare tactic.”

Berry said that Georgia believes in the Second Amendment and that means that law abiding citizens should be able to carry and buy firearms.

The rest of the interview is good too, Please watch it below.

In addition, should you be a law-abiding citizen who wants to show your non-support of Dana Safety Supply by not purchasing from them, here are a few more companies owned by the same people that own DSS:

UPDATE: I spoke with Sheriff Berry this morning (1/7) via telephone and he appreciates all the support. He also said it was the “farthest thing from his mind” to change the policy of DSS. He stands by his statements and hopes that other sheriffs across the country will do the same.

Islamic Cleric: Permissible to Engage in Sodomy if You are Engaged in Jihad

Is DHS Giving Americans 50 Million Reasons To Think Obama Is Gearing Up For A Civil War?

Is DHS Giving Americans 50 Million Reasons To Think Obama Is Gearing Up For A Civil War?