I Am Sorry: Barack Obama’s Sorry Apology for a Sorry Healthcare Law Just Doesn’t Cut it – How About a Resignation?

Home » I Am Sorry: Barack Obama’s Sorry Apology for a Sorry Healthcare Law Just Doesn’t Cut it – How About a Resignation?

Are any of you buying President Obama’s faux apology, because I’m not. “I’m sorry” just doesn’t cut it, not by a long-shot! President Obama has divided this country as no other president in the history of this nation has ever done. He has divided us by: Class, Sex, Race and Religion, so how do you go about apologizing for that? He has told so many lies that not even he can’t keep track of them anymore; it’s painful to watch.

Obamacare is a man-made disaster, and we are not done feeling the negative effects yet, not by a long shot! Democrats who are up for re-election can’t wait to distance themselves from this guy. I wonder what possible reasons they will give the voters not to fire their sorry butts? If you are a Democrat, who was in office in 2009, you voted for Obamacare, it’s just that simple. What will they do when they go home to campaign for re-election? What possible excuse can they give to the people of their districts, especially to those who have lost their medical insurance, as to why they should keep their jobs and be re-elected? Not one single Democrat who signed the Affordable Care Act even read the damn thing before signing it…not one! If I were one of them, I’d be dusting-off a resume and start looking for one of those lobbyist’s jobs.

Even the Sequester and so-called “Government shut-down,” which he blames the Republicans for, can be laid directly at President Obama’s feet. He would not negotiate; he demanded that Obamacare be funded, and if it wasn’t his way…well, we all know how that went don’t we? So much for “reaching across the aisle,” eh?

No, I’m afraid a simple little apology for this latest disaster isn’t going to work. We still haven’t gotten to the bottom of Fast and Furious, Benghazi, the NSA spying on Americans, the IRS targeting the Tea Party , so forgive me for not accepting his “apology” on Obamacare.

Obamacare was a train wreck waiting to happen and the sad part is; it all could have been avoided, but sadly it was forced upon us. Now there’s hell to pay, and it’s all your fault Mr. President and come November of 2014, things are really going to “change” believe you me. Has anyone noticed how Hillary Clinton is being really quiet on all this? 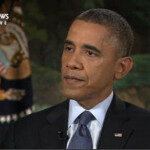 You bet your life she’s not touching this, she thinks she is going to be President in 2016. I wonder, what will she say if she’s elected (God forbid), will she say she “inherited a mess,” or will she “blame Bush” too? I’m on pins and needles over that.

I think the best possible thing for President Obama to do right now is; take an “extended vacation” with his family for the remainder of his last (thank God) term in office! Either that, or just resign from office. Either one works for me, as long as he’s out of Washington D.C.