Was Stephen Paddock A Patsy?

I ask this as a legitimate question because several things don’t seem to quite add up.  However, the one thing that needs to be asked is, if true, who was Stephen Paddock a patsy for in an attack that left at least 58 dead and more than 500 wounded, making it the deadliest mass shooting in American history?

First, let’s review some of the reports we’ve received.

We have been told that police have cleared Paddock’s girlfriend, Marilou Danley, in the shooting, claiming that she is out of the country, but would not say where.

How are we to believe that she is cleared?  They spoke to her on the phone for goodness sakes!

We know the FBI, who have allegedly been investigating Russian involvement in America’s elections for months and Donald Trump on top of that, has been assisting in the case and can’t seem to clear anyone on any of that in the short amount of time this clearing of Ms. Danley could be accomplished.

Even though she has been cleared, investigators still want to speak to her when she returns, according to the Reno-Gazette-Journal.  She’s apparently in the Philippines, according to a friend.

It’s convenient that a woman that has allegedly been living with Mr. Paddock in her house and drive her cars was out of the country when this took place, and that investigators are willing to clear her based on phone conversation.

The Daily Mail reports, “Records show that Danley and Paddock lived together in a three-year-old, two-bedroom home on Babbling Brook Court in the tiny desert community of Mesquite, which is 80 miles north east of Las Vegas near the Arizona state border. Record show the property cost $396,000 (£297,554).”

Even more interesting is that the Reno-Gazette-Journal reported:

Danley was previously married to Geary Danley, who now lives in Arkansas. They married in Las Vegas in 1990, according to Washoe County records.

The former couple jointly filed for divorce on Feb. 25, 2015, and the divorce was finalized the next day.

During her divorce, Marilou Danley listed a downtown Reno unit at the Montage on Sierra Street as her address. At the time, the unit was owned by shooting suspect Stephen Paddock. Court records indicated that she started living at the address in August 2013. Paddock sold the condominium in December 2016.

The Reno Gazette-Journal talked to two people who were connected to Danley. Both were associated with the person listed in divorce records as Danley’s witness.

When the RGJ called the divorce witness’ business, a man who did not give his name expressed anger when asked about Danley’s relationship to Paddock.

“She had nothing to do with this psycho,” the man said of Danley. “The poor lady, she is in the Philippines visiting family.”

Another man answered the door at the divorce witness’ home. The man, who also did not give his name, gasped when informed Danley knew Paddock. He said Danley’s friend had been in contact with her in recent days but wouldn’t share further details.

These people are surprised she knew Paddock, but she was living with him!

Also, consider the fact that Paddock “had used Danley’s slot card to gamble in the hotel, and that he was in Las Vegas for three days prior to Sunday’s shooting.”

Eric Paddock, told CBS News that Danley was his brother’s girlfriend and that he had met her “three to four times.”

“They might have got married, but I don’t think they’re married. She’s just his girlfriend,” Eric said. “She’s a nice lady, I’ve met her three or four times. She’s got a Facebook page, she sends my mom cookies.”

Still, there were reports that he was going through a divorce, but it was unclear if the divorce was with another woman or Danley.

Now, consider that, as I suspected previously, an FBI source is claiming that Paddock was found with Antifa literature and photos taken in the Middle East.

The Las Vegas shooter didn’t commit suicide as the mainstream media is reporting, but was killed by a FBI hostage rescue team who also found Antifa literature in his hotel room, according to a source linked to the team.

The FBI team took the suspect out after he opened fired on them, according to the source, and afterwards the team found photos taken in the Middle East of a woman linked to the suspect, 64-year-old Stephen Paddock.

A police scanner transcript (from the Daily Mail) collaborates with the source’s revelation:

And the Daily Mail reported:

Daniels went on to report that a “deep-level” intelligence insider said the attack was “very, very strange,” and added that it had all the “fingerprints” of a false flag.

According to the source:

This was an average 64-year-old white male with no criminal record. He was an apartment owner with a pilot’s license and owned two airplanes.

His brother described him as an average person who was not into firearms and never owned that many guns. He claimed he just, “snapped.”

His hotel room was filled with guns, including several long guns. Where did those guns come from?

But, this was clearly a pre-planned attack and the group [the target] was specifically chosen.

The target was a concert of the group that represents traditional America.

These were patriotic, God-fearing Americans. This group is pro-Second amendment, pro-Constitution and anti-NWO.

This is the group Obama accused of “Clinging to their guns and religion.”

We are still awaiting all the facts, but the concern is we have seen the government engage in false flags events in the past, and an example of this is CIA Operation Gladio in Italy.

As I examined the 9/11 attacks, I was forced to reach the conclusion that it was more than just a terrorist attack. It has finger prints of a possible false flag event itself.

So, sadly we now have to consider that as a possibility here.

That is a dramatic conclusion and one that most Americans cannot get their mind around. It is just too shocking.

We can be sure this will increase the Shadow Government’s surveillance state, specifically inside the United States.

Meanwhile, the Islamic State took credit for the attack and then doubled down on it, leading me to conclude that they know there is no real tie Paddock has to white supremacism or a Neo-Nazi group. 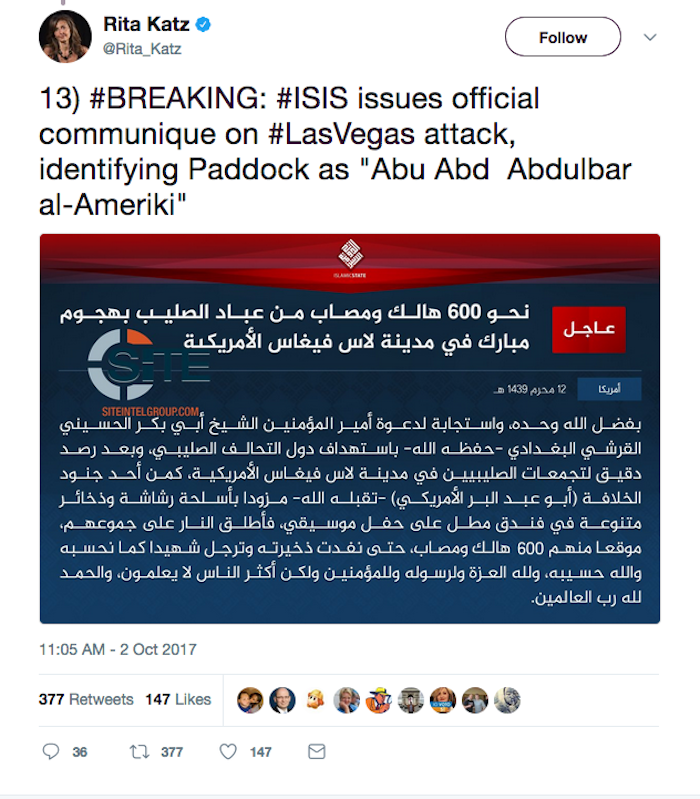 So, is it Antifa, the Islamic State or something and someone else?

Even more interesting is that police said that Paddock used Danley’s ID to check into the Mandalay Bay hotel even though she was outside the country and is not suspected of being a part of what took place.  What hotel lets you check in with someone else’s ID?

Is anything making anyone questions what we are being told?

While I’m totally pro-Second Amendment, I do wonder how he obtained 10 rifles that he had in his possession when he was alleged to have only had a couple of handguns.

Even his brother was surprised that he had automatic rifles.

Eric Paddock, the shooter’s brother, told CBS News that Stephen was “not an avid gun guy at all.”

“The fact that he had those kind of weapons is … just … where the hell did he get automatic weapons? He has no military background or anything like that,” Eric Paddock said. “He’s a guy who lived in a house in Mesquite and drove down and gambled in Las Vegas.”

The question that is how did he obtain them, or were they planted at the scene?

We know his father, Benjamin Hoskins Paddock, was a well-known bank robber and on the FBI’s Ten Most Wanted list from 1969 to 1977, according to USA Today.

The father of the suspect behind Sunday night’s massacre in Las Vegas was on the FBI’s 10 most-wanted fugitives list in 1968 after escaping from a Texas prison that same year.

Benjamin Paddock had been sentenced to 20 years in the Federal Correction Facility in La Tuna, Texas, about 20 miles north of El Paso, after robbing Valley National Bank in Phoenix in 1960, according to a 1971 story in the now-shuttered Tuscon (Ariz.) Daily Citizen.

In 1961, he was sentenced to 20 years in federal prison. Two prior accusations of bank robberies surrounded Benjamin Paddock but were dropped in court.

At the time of his escape, authorities said Benjamin Paddock was a diagnosed psychopath and therefore “extremely dangerous.” The FBI reported he had suicidal tendencies.

Here’s a question I pose, is it possible that Paddock was set up?  Too much of this just does not make any sense at all:  The Islamic State claims responsibility, Antifa literature found, girlfriend out of the country, yet hotel allows him to use her ID to check-in and he gambles with her card. Could he have simply been set up in an attempt to further a coming anti-gun agenda and more imposing on Americans’ civil liberties?

I just wonder if Paddock was a patsy.