Stock Market Crash October 2015? 9 Of The 16 Largest Crashes In History Have Come This Month

Home » Stock Market Crash October 2015? 9 Of The 16 Largest Crashes In History Have Come This Month

The worst stock market crashes in U.S. history have come during the month of October.  There is just something about this time of the year that seems to be conducive to financial panic.  For example, on October 28th, 1929 the biggest stock market crash in U.S. history up until that time helped usher in the Great Depression of the 1930s.  And the largest percentage crash in the history of the Dow Jones Industrial Average by a very wide margin happened on October 19th, 1987.  Overall, 9 of the 16 largest single day percentage crashes that we have ever seen happened during the month of October.  Of course that does not mean that something will happen this October, but after what we just witnessed in September we should all be on alert.

Clearly, there is a tremendous amount of momentum toward the downside right now.  As you can see from the chart below, all of the gains for the Dow since the end of the 2013 calendar year have already been wiped out… 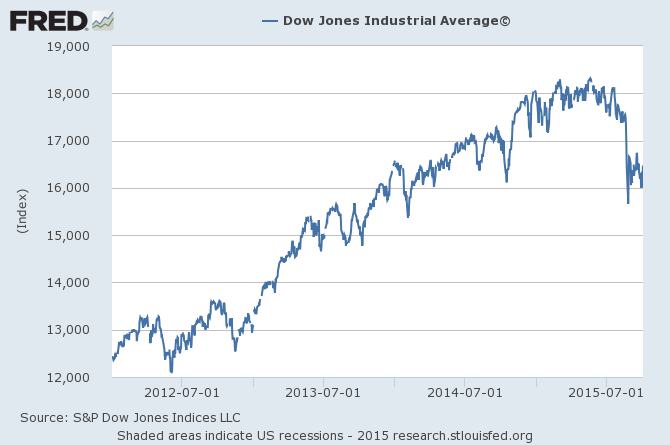 And as I wrote about just the other day, last quarter we witnessed the loss of 11 trillion dollars in “paper wealth” on stock markets all over the planet.  The following comes from Justin Spittler…

In total, last quarter’s selloff erased nearly $11 trillion in value from stocks around the world.

Sadly, the mainstream media is assuring everyone that things are going to be just fine, and a lot of people on the Internet seem to have the attitude that “nothing is happening.”  Just like in 1929, a brief period of stabilization after the initial fall has lulled many into a false sense of security.  The following comes from Zero Hedge…

Just as in 1929, the market was performing fantastic and the continuous wealth increase seemed to be unstoppable. A short 10% correction was seen as ‘healthy’ and soon a new uptrend was starting (the green line). This is exactly the same scenario we saw in the past few weeks. Market commenters said the 10% drop in the Dow Jones was a ‘healthy correction’ and we’re on our way to the next uptrend and Christmas rally.

Most people seem to assume that since I run a website called “The Economic Collapse Blog” that I must be rooting for a stock market collapse and an economic implosion, but that is not true at all.  The longer that the financial markets can hold together, the longer all of our lives can stay quiet, peaceful and “normal.”  Once the chaos begins, all of our lives will change dramatically.  No matter how much any of us have prepared, what is coming is going to deeply affect all of us at least to a certain degree.

As we witnessed in 2008, our financial system is not designed to handle a severe bear market.  We should have learned some very hard lessons from the last time around, but we didn’t.  Instead, our financial system is even more vulnerable to a crisis today than it was back then.  A huge turn down by the financial markets will rip many of our top financial companies to shreds.  So a bear market would be extremely bad news, but unfortunately many prominent analysts seem to believe that this is precisely what we are now facing…

Jim Cramer, the ex-hedge fund manager and host of CNBC’s show “Mad Money,” has been vocal recently on air, saying repeatedly that he doesn’t like the market now, and last week said “we have a first-class bear market going.” Similarly, Gary Kaltbaum, president of Kaltbaum Capital Management, has been sending out notes to clients and this newspaper for weeks, saying the poor price action of the stock market and many hard-hit sectors, such as energy and the recently clobbered biotech sector, has all the earmarks of a bear market. Over the weekend, Kaltbaum said: “We remain in a worldwide bear market for stocks.”

On the way up, all of the extreme risk-taking didn’t seem to matter much because everyone was making a lot of money.

But on the way down, all of the extreme risk-taking is just going to accelerate the collapse.

Personally, I do not know exactly what will happen over the next few weeks, but without a doubt I have a very bad feeling about the rest of this year.

What do you think will happen?

Despite Clinton Secrets You Can Vote for Good

Despite Clinton Secrets You Can Vote for Good