In All the Talk about Clinton's Uranium One Deal, Why Is No One Talking About the Malheur Documents Found by the Bundys?

As news outlets across America are reporting on a Federal Bureau of Investigation informant being allowed to testify before Congress on the Clinton-Obama Uranium One deal with Russia, no one in the media is referencing the documents that were uncovered by the Bundy brothers and others during the Malheur Wildlife Reserve protest in early 2016.

Fox News reports on the gag order of the informant being lifted to speak to Congress.

The Justice Department said Wednesday night that it had lifted a gag order on a former FBI informant involved in a high-profile Russia bribery case, clearing the individual to speak to Congress about Moscow’s Obama-era uranium deals in the U.S. market and other schemes.

In a statement, the department said it had authorized the informant to speak to the leaders of the Senate Judiciary Committee, House Oversight Committee, and the House Permanent Select Committee on Intelligence, in addition to select staffers.

The department said the informant could provide “any information or documents he has concerning alleged corruption or bribery involving transactions in the uranium market,” including Russian company Rosatom, subsidiary Tenex, Uranium One and the Clinton Foundation.

This is all fine and dandy, but why is there no talk of ranchers Dwight and Steven Hammond and the bullying they received at the hands of the government over their land which is rich in minerals, including Uranium?

This issue is much bigger than Hillary Clinton.  This goes all the way to the Constitutional issue of federal land grabs and then the tyranny it exercises over the usurpation of that land.

I’m highly doubtful we’re going to see anything come of the probe into Hillary Clinton and the Uranium One deal.  If we do, great!  I’m happy to be proven wrong on that.

However, the issue won’t stop with that.  Our federal government has an endgame with its land grabs and it isn’t for the benefit of the people.

Let me show you what I’m talking about.  The following is from my report from nearly a year ago.

Ammon Bundy and several other patriots occupied the Malheur Wildlife Reserve in Oregon in late 2015 and early 2016 and were subsequently arrested, for which they were also acquitted on all charges.

Reporter Pete Santilli, who was at Malheur and had all charges dismissed against him in September 2016 said, “Before being arrested I was researching and reporting on the connection between Malheur, Hillary Clinton, and Uranium One. I was arrested the day after I released the [Hammond Legal Files] and at that point, my investigation was effectively stopped; now that Donald Trump has brought the issue back into the spotlight, I thought we should take another look.”

The Hammond Legal File, is a 682 page legal history of the Hammond family’s decades’ long fight over land rights with the BLM and Department of Fish and Wildlife in Harney County, Oregon.  Nestled in the pages was a letter that Santilli dubbed, “The Mineral Letter” and has never been seen until now.

The letter was addressed to Chad Karges, head of “The Department of Fish and Wildlife” whose office is located at the Refuge.  While the letter did not reveal a clear connection between Malheur and Uranium One, we did find it revealed that as of 2012 the mineral rights – surrounding and inside the property itself, belonged to 2 private investment firms. That information coupled with Uranium One’s Facebook post does open the door for possibility. 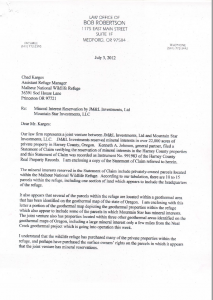 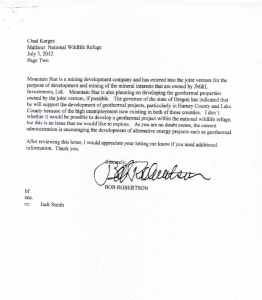 The letter is of great interest because just a short time before it was written to Karges, it was being widely reported that Oregon Energy llc [a subsidiary of Uranium One] was poised to start mining for Uranium in Oregon.

Bob Robertson, the Attorney from Medford Oregon who wrote to Karges in July of 2012, and is also the administrator of Mountain Star Investments LLC, one of the principal mineral rights owners on the refuge, explains in the letter; The joint venture owns a total interest of 22,000 acres of mining reservations around and inside the Refuge including the parcel the Refuge Headquarters sits on.

Interestingly, Robertson is no stranger to fighting for property owners in Oregon.  In 2007 he was part of a legal team that fought for 25 Oregon land owners  to have the right to develop their properties as they saw fit.

James M. Lemons is the owner of multiple companies in Texas and also owns the other investment company mentioned in the letter, JM&L Investment LTD.  Among his holdings is a company called Fellowship of The Metroplex, a string of bankrupt churches throughout Texas and other Western States.  This does not fit the profile of a man who supposedly owns 22,ooo acres of mineral rights, that includes the Malheur Refuge headquarters.

The problem with Lemons is, he seems to own shell companies that really don’t produce anything. One researcher for this article claimed; “This is not uncommon in cases like these, and it is highly probable James M. Lemons is not even a real person.”

Bob Robertson claims in the letter that Mountain Star Investments LLC was a company in 2012, but the information on the web says the company was not formed until 2014.  It is listed only as an investment company. 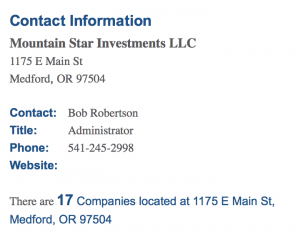 Since both companies leave much to the imagination, I will leave this section open for updates as obviously more research needs to be done.  Is there a connection to Uranium One?  That questions yet to be fully answered.

As I reported in January, the Hammond’s Ranch is rich in Uranium and other minerals. In fact, it’s worth billions!  Just take a look at the following two videos and see for yourself.

Santilli says that the central government continues to refuse to admit that the BLM’s illegal land grab is all about Uranium.

If this is not enough information to point out the Uranium-rich area of Oregon, then have a look at the BLM’s own website where they document the following:

Uranium on BLM-Administered Lands in OR/WA

In September 2011, a representative from Oregon Energy, L.L.C. (formally Uranium One), met with local citizens, and county and state officials, to discuss the possibility of opening a uranium oxide (“yellowcake”) mine in southern Malheur County in southeastern Oregon. Oregon Energy is interested in developing a 17-Claim parcel of land known as the Aurora Project through an open pit mining method. Besides the mine, there would be a mill for processing. The claim area occupies about 450 acres and is also referred to as the “New U” uranium claims.

On May 7, 2012, Oregon Energy LLC made a presentation to the BLM outlining its plans for development for the mine.

The Vale District has agreed to work with Oregon Department of Fish and Wildlife on mitigation for the “New U” uranium claims, which are located in core sage grouse habitat. Although the lands encompassing the claims have been designated core, the area is frequented by rockhounds and hunters, and has a crisscrossing of off-highway vehicle (OHV) roads and other significant land disturbance from the defunct Bretz Mercury Mine, abandoned in the 1960s.

However, by the fall of 2012 the company said that it was putting its plans for the mine on hold until the uncertainty surrounding sage grouse issues was resolved.

So, the question I have for Attorney General Jeff Sessions is, why are you not seeking to vindicate the Hammonds and submit the documents discovered by the Bundys and reported on by Santilli and start getting at the root of this entire fiasco?  Do you have a stake in this too?

The Reasons Hillary Clinton Should Go To Prison In 2018

The Reasons Hillary Clinton Should Go To Prison In 2018