Ted Cruz: I Didn’t Come to the Senate to Make 99 New Friends

I like Senator Ted Cruz (R-TX). I have appreciated his stand since before he became a United States senator. I was encouraged to see him stand and speak on behalf of Americans against funding Obamacare for over 21 hours recently. I was happy to see him stand alongside America’s veterans as they protested in Washington. I confess a little disappointment at simply letting the recent deal go through with only a “No” vote when he promised to use every procedural means necessary he could to stop Obamacare. In that vein, Cruz is who he is and recently he told ABC News’ Jon Karl, following the shutdown deal on Wednesday evening, “There’s an old saying that, ‘Politics, it ain’t beanbag.’ And, you know, I’m not serving in office because I desperately needed 99 new friends in the U.S. Senate.”

I like that. We’ve seen that he has not made a number of friends, but he certainly has the backing of many conservatives in America. Despite establishment Republicans and Democrats blasting Cruz and the Tea Party, Cruz has outstanding support.

In the interview Cruz also made it known that he believes the RINO Republicans in the Senate are the ones responsible for sabotaging his efforts to tie the funding of the government to his attempts to defund Obamacare. 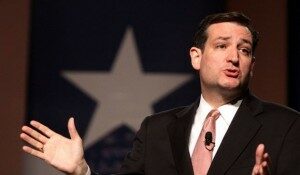 Cruz then blamed the Senate Republicans, who voted for the Harry Reid / Mitch McConnell deal, for attacking House Republicans during the partial shutdown.

“I think it was unfortunate that you saw multiple members of the Senate Republicans going on television attacking House conservatives, attacking the effort to defund Obamacare, saying, ‘It cannot win; It’s a fools error and we will lose, this must fail,'” Cruz said.

“That is a recipe for losing the fight, and it’s a shame.”

Cruz has definitely faced his share of criticism from establishment Republicans and has weathered the storm quite well. John McCain followed Democrat Senator Bob Menendez’s ((NJ) claimed that Cruz has “Obamaphobia,” with his own ad hominem attack on Cruz, referring to him as a “wacko bird.” McCain had referred to Cruz along with Senator Rand Paul (R-KY) as “wacko birds” following Paul’s filibuster against the nomination of Muslim convert John Brennan to be Director of the Central Intelligence Agency (CIA).

Dr. Joel McDurmon pointed out recently that this is merely the result of what Hillary Clinton coined as the “vast right wing conspiracy.” McDurmon defines that conspiracy as something other than what Clinton meant. He writes:

“But let me tell you, there is indeed a vast right wing conspiracy. The real vast right wing conspiracy is, and always has been, that of establishment Republicans conspiring even with Democrats to make sure true conservatives among their ranks fail. Anyone who threatens the establishment, the cash flow, the good old boy networks, and the centralized power in Washington must be stopped at all costs. And this has been the consistent practice for a long time.”

McDurmon rightly shines the light on the RINOs in the Republican Party and demonstrates they are nothing more than Democrat aides in support of their agenda. He called out Boehner, Cantor, McCain, Schnock and others and after pointing out their rhetoric asks “With Republicans like these, who needs Democrats?” I agree.

This is what goes for “being constructive” and “getting things done.” It wants to eliminate—annihilate—the true conservative elements in its midst, and it does not mind at all embracing Democrats and upholding Democrat principles in order to do so.

And the truth is, it never has. And that, my friends, is the real vast right wing conspiracy.

For those concerned with national politics, there will only be one way to make changes in this regard, and that is to change the substance of what sits in the seats of these establishment conspirators.

The moral of this tale is summarized in an old adage which advises “Those who are new in Washington and are looking to make a friend, should buy a dog.”