Jamaat ul-Fuqra is a terrorist organization that is known to be firmly entrenched in the United States. It has never been listed as a “terrorist group” despite the FBI’s admission that the group is linked to at least 10 murders, one disappearance, three firebombings, one attempted firebombing, two explosive bombings, and one attempted bombing.

Here is some background information on Jamaat ul-Fuqra from Wikipedia:

Jamaat ul-Fuqra (alternatively Jamaat al-Fuqra) (“Community of the Impoverished”) is a paramilitary organization of mostly African-American Muslims based in Pakistan and the United States. Some of the approximately 3000 members have planned various acts of violence, often directed at rival factions.[1] Two Al-Fuqra members were convicted of conspiring to murder Rashad Khalifa in 1990,[2][3] and others are alleged to have assassinated Ahmadiyya leader Mozaffar Ahmad in 1983.[4][5]

The group itself is not listed as a terror group by the US or the EU, but was listed as a terrorist organization in the 1999 Patterns of Global Terrorism report by the U.S. State Department.[6] It operates two front groups: Muslims of the Americas and Quranic Open University.[7] They also have been known to operate in Canada,[8] and the Caribbean.[9]

Although various members have been suspected of assassinations and other acts of terror perpetrated in the 1980s and later,[12] and some members having been charged with conspiracy to commit first degree murder and other crimes,[13] al-Fuqra itself is not listed as a terror group by the US or the EU (it was listed as a terrorist organization in the 1999 Patterns of Global Terrorism report by the U.S. State Department.) [6]

News reports have attempted to connect “shoe bomber” Richard Reid and “Washington sniper” John Allen Muhammad to al-Fuqra, but the connections were not definitive. There are also allegations that Clement Rodney Hampton-El, one of the plotters who planned to blow up various New York City bridges and tunnels, was a member of Al Fuqra.[14] The group has been banned in Pakistan.[15] Jamaat Al Fuqra was also involved in the planned bombing of a Hindu temple in Toronto, Canada in 1991.[16]

The MOA compound in Texas, described by the FBI as an “enclave” and “communal living site,” is in Brazoria county along County Road 3 near Sweeny. It was discovered by the FBI due to a tip from an informant in New York.

The MOA referred to its Texas commune as “Mahmoudberg” in online instructions for a parade in New York in 2010. A posting on an Islamic message board in 2005 advertised a speaking engagement in Houston by someone from Mahmoudberg.

According to the reports, the commune is seven to 10 acres large, is in an “extremely wooded area” and two or three trailer homes moved there in December 2001. However, ACT members visited the area as part of Clarion’s investigation and interviewed one nearby local who confidently said it is closer to 25 acres in size and spoke of a presence dating back to the late 1980s.

“The area is so rural it is quite common for residents to shoot firearms for target practice or hunting on private property without interference from law enforcement,” one FBI report states.

MOA is an abbreviation for “Muslims of the Americas” or “Muslims of America” which, according to Clarion, has a network of 22 “villages” around the U.S., with Islamberg as its main headquarters in New York. The Clarion Project obtained secret MOA footage showing female members receiving paramilitary training at Islamberg. It was featured on the Kelly File on FOX News Channel in October. A second MOA tape released by Clarion shows its spokesman declaring the U.S. to be a Muslim-majority country. 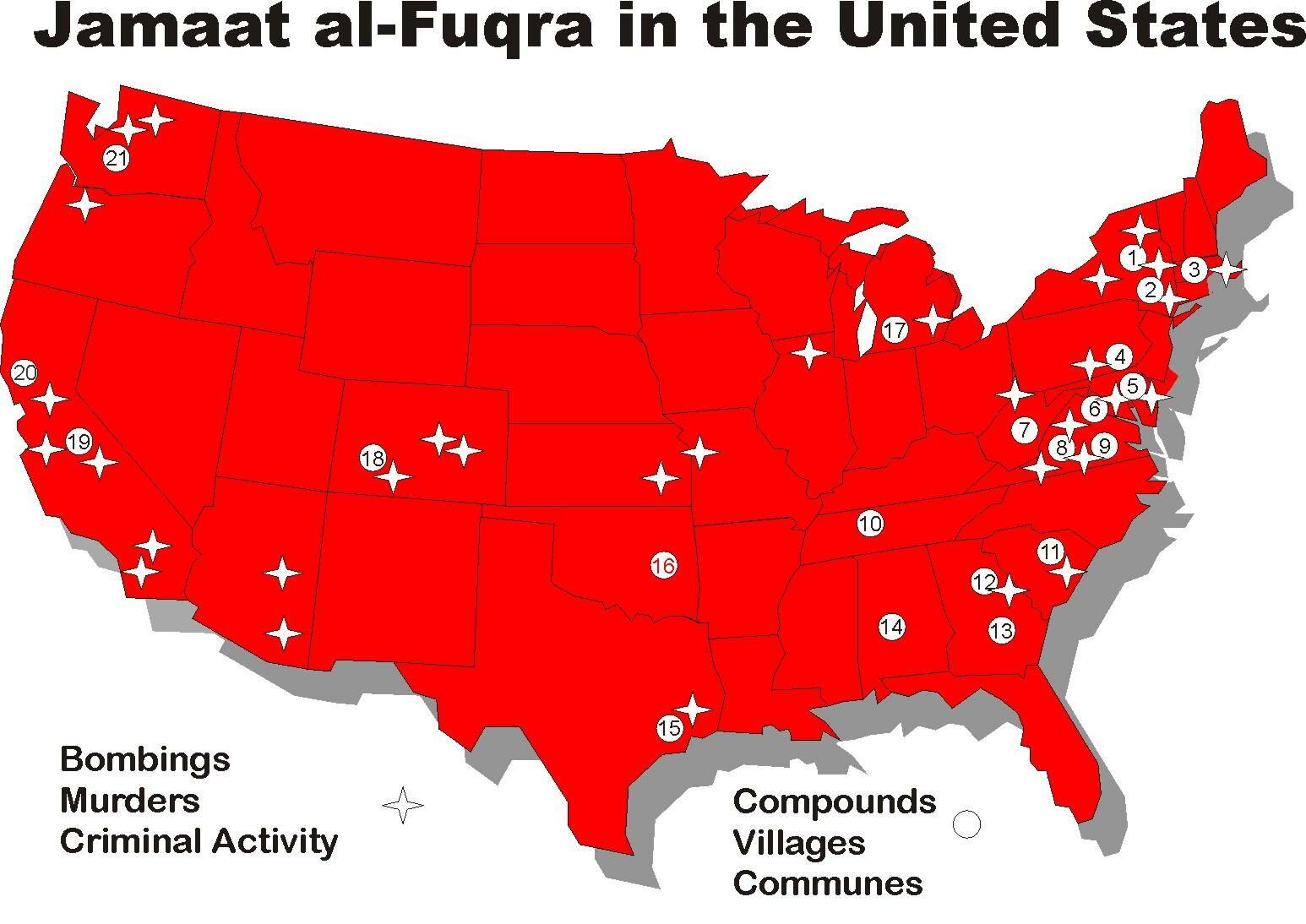 According to WND, there may be more than 22 of these “villages” throughout the country:

A radical jihadist group responsible for nearly 50 attacks on American soil is operating 35 terrorist training camps across the nation, but the U.S. government refuses to include the organization on the State Department’s list of foreign terrorists.

Jamaat ul-Fuqra, known in the U.S. as “Muslims of America,” has purchased or leased hundreds of acres of property – from New York to California – in which the leader, Sheikh Mubarak Gilani, boasts of conducting “the most advanced training courses in Islamic military warfare.”

How do you feel about your government knowing about the location and existence of these cells and continuing to let them operate?

This all points back to the immigration debate in this country. As I reported back in June, securing our southern border is one of the biggest steps we can take to halt the influx of terrorists. Many of them enter through Arizona. Here is a short report from 2010 that talks about the problem:

Here is a link to the declassified FBI document, courtesy of the Clarion Project: FBI-Jamaat-ul-Fuqra-1

Remember When Trump's AG Scolded Obama's Secretary of Defense for not getting Military Authorization for War in Libya?

Remember When Trump's AG Scolded Obama's Secretary of Defense for not getting Military Authorization for War in Libya?