The Alleged "Smartest Cities" In The US – AKA, Most Indoctrinated

It’s the first week of 2019, Anti Fed Ed Warriors! One of the things media loves to do is create countdown lists from the past year. If it’s not a countdown, it’s a ‘best of’ list to celebrate some minute event. You know, like “2018’s Best Places to Get a Hot Dog” or such.

CCSS: Using subjective groups to appear objective to us.
I don’t really pay attention to those lists. However, there was ONE which did catch my eye. It was a list of the most educated towns in all 50 states. The catch? It’s from a corporate viewpoint (ie: Big Business or Big Biz). With the educratic BS the CCSS Machine has been spitting out for years via Big Biz about education, we need to take a closer look, in my opinion. What makes the corporate world think it’s such an ‘expert’ in education, anyway?!

Business Insider used U.S. Census Bureau data to publish the “Most Educated Town in Every State” in December 2018.
You had to be at least 25 years of age, have a bachelor’s degree, and have at least 1,000 citizens in your town. From these 3 items, Business Insider discovered that across the nation, education levels are different (gee, really?) and educational achievement can be found at all kinds of levels. (again, do we really need a business publication to tell us that?)
Here’s the map Business Insider created:

A quick side note about Business Insider, it’s a German-owned tech/digital/business group. Founded in the US, a powerhouse German publishing company bought the group in2015. While the reliability of BI (Business Insider) has been questioned, the one point remains: millions still access and accept the news the media group sells/shares. Another fact, you’ve got a German-based company accessing U.S. Census data.

So, Here’s A Question:

Warriors, is there any connection of the “Most Educated” towns to those “Smart Cities”across America? Look below at the same map from Business Insider with some emphasis I added. Yes, there’s an absolute connection!!

Where did I find my information to make the connection between “Most Educated” and “Smart Cities”? The U.S. Dept. of Transportation. Why DoT? Smart Cities must change your city’s infrastructure to succeed.

ESSA (Every Student Succeeds Act) actually mandated innovation and infrastructure changes to be made. However, ESSA’s not the only law of the land allowing this. Many other federal laws are, as well. Anything law with STEM (Science, Technology, Engineering, and, Math) will impact infrastructure changes.

Why all the changes? To align our nation with the Sustainable Development Goals from the United Nations and UNESCO. Many experts on “Smart Cities” will tell you the proof exists to point to a global agenda of being tracked, data mined (aka: data raped) constantly in these Smart Cities. What if you live in the country or rural areas?

How will you be tracked? You’ll be herded into a “most educated” or “Smart City” near you. For example, in the map I created, NC has the ‘most educated’ town near Asheville, NC. Asheville isn’t near a bonafied “Smart City” right now (it is in an “Innovation Zone” for NC). The nearest “Smart City”? Charlotte.

What’s interesting about Asheville (besides having a ‘most educated’ label now) is that it uses a data raping innovation system called “Passport”. Supposedly Passport is such a hit with big cities and small towns because it can help relieve congestion. Other ‘benefits’ can help police or even make your city/town safer. If you have a ‘safer city’ you have a less stressed citizen group. The less stress you have, the better your mental health will be. I kid you not. Access the ‘white paper’ research behind this, here. Then, see for yourselves a summary in the screenshot: 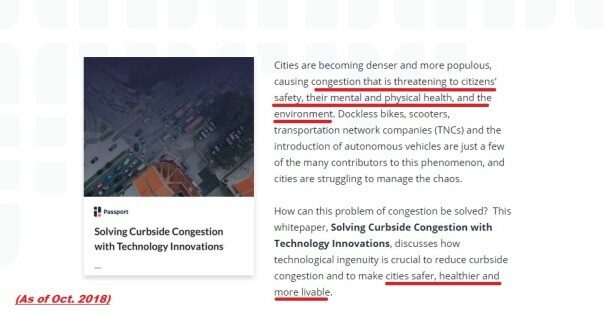 Think about the ESSA mandates and mental health grabs via ‘Safe Schools’. “Safe Schools” must be in ‘safe cities’. Look at your State’s legislation concerning ‘safe schools’ it’s more control, not more freedom or safety.

Back in 2016, I showed you that the US was involved in the OAS (Organization of American States) and that some research had been done to connect OAS to “Smart Cities”.

Here’s a screenshot from the OAS Ministers of Education meeting (held in 2017, in the Bahamas): 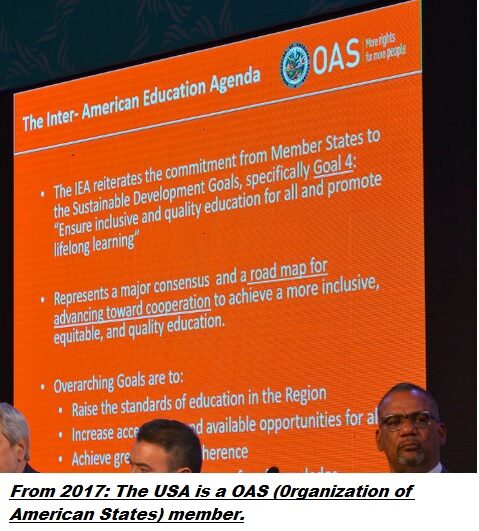 Was America there at this meeting in 2017? Yes: 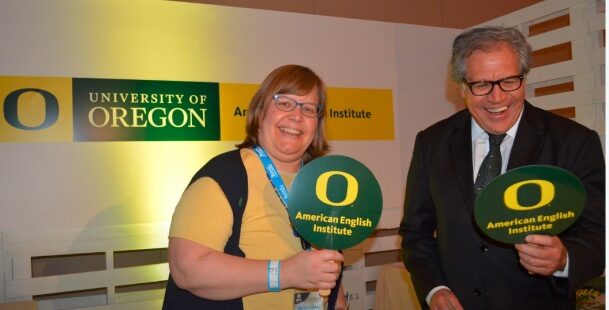 (*Note the badge on around the lady’s neck. The upper right corner has “OAS”.)

Warriors, see the US Flag? See the message by “OAS”?

Then, this US lady (unknown to me). Look at her expression: 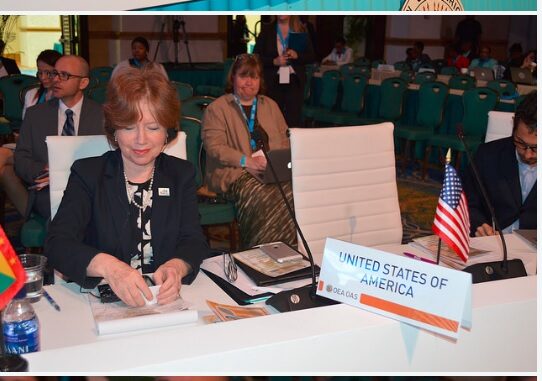 Since much of the OAS mission for education is to add more technology, more early childhood learning all while adhering to the UN’s SDGs, you may like to see what the 10 SEL (Social Emotional Learning) global goals are or the 6 Global Competencies we’ll have to all have. I showed you that and how it ties to ESSA and school safety (aka community safety) in October 2018. 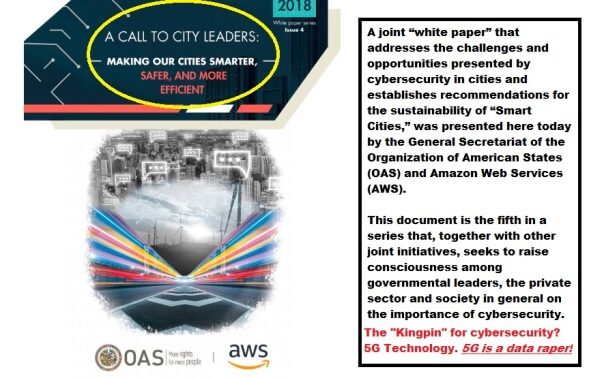 Warriors, if you want to learn about the ‘social acceptance’ expected of We the People when it comes to “Smart Cities” we need only to look at the short video featured at the 2018 Connected  Smart Cities Conference. The Conference is a part of the “Open and Agile Smart Cities” (OASC) based in Europe.

Within the 7 minutes, you’ll learn quite a bit about the agenda, you’ll be able to apply some of what’s already in place in Europe to America, especially as business stands to gain a fortune via “Smart Cities”. You’ll be able to learn citizens have a manifesto to adhere to, that P3s (public private partnerships) must be used. (*Note: P3s are fascism in nature, therefore totally un-American, yet we’re so run over by the CCSS Machine and DC legislation,{ESSA’s an example} it’s treasonous.)

There are quite a few ‘alphabet soup’ acronyms given by the speaker. Here is a brief list and how it connects to the US and/or Smart Cities:

EC: European Commission (has an Urban Agenda for citizens which involves compliance. Also works hand in hand with the EU, European Union) Many workforce/education models from the EC have been embedded in US legislation, mainly at the federal levels.

BSI: British Standards Institute offers business, medical, and industry parameters. Has an office in the US and impacts several aspects of daily living. Also deals in investing.

ETSI (2017): European Telecommunications Standards Institute. Handles technology and digital aspects. From the “Smart Cities” aspect, it has developed  Context Information Management (harnesses all the smart device data available*. For example, your smart meter, smart car, in home assistant, etc.) and City Digital Profiles. (*the pdf is from the Open and Agile Smart Cities Conference explaining how the data is collected. There are a few good illustrations.)

ISO: International Organization for Standards This international group is not only key to business and industry, but is 100% involved with the SDGs.

ITU: International Telecommunication Union This Union is big on technology, internet, data, and, AI (artificial intelligence). ITU is a part of WSIS (World Summit on the Information Society). WSIS is a key UN partner. In April 2019, the Summit will focus on the advancement of the SDGs and includes UNESCO as well as a host of CCSS Machine connected groups tied to all of these listed.

Horizon 2020: This is an EC massive initiative. Basically, it’s Research and Development for innovation for the entire European Commission. Not only does it impact businesses, but will use job skill training for employment. Backed by P3s (as the EC calls it P2P) and legislation. Of the information I found, the funds to pay for all this alignment have been extended. One of the grants used was to break hundreds of years old religious practices to promote tolerance. Science and healthcare are also involved.

EFSI: European Fund for Strategic Investment is part of the EC as well. Under the EFSI is what is called the Juncker Plan. The Plan is to find ways to make Europe as mighty as in once was by investing in all aspects of life.

EIB: European Investment Bank is the financial arm of the EU. They invest heavily in “Smart Cities”.

Warriors, I’m not sure how ‘smart’ the CCSS Machine thinks it is, I do know it’s got a bloated image of itself, especially when it’s assumed we are ‘dumb bunnies’ who will roll over and accept all this blindly. The reason I took such time to dig into this one Business Insider article was I knew the real truth would never come out. There is much, here which connects to education, but there’s EVEN more which shows the pattern to assaulting our freedoms! We MUST share this type of truth, my followers. If we will not stand for freedom, who will?!