The Clintons masterminded the mandatory free Vaccines for Children program back in 1994 – paid for by taxpayers – while pocketing hundreds of thousands of dollars from vaccine manufacturers over the years. While the MMR vaccine is dished out like candy over the “measles outbreak,” and the exclusive manufacturer Merck has increased revenues by 27% to $496 million, the media is pimping out doctored baby photos to create panic and claiming the “outbreak” is the fault of anti-vaxxers, as the CDC inflates numbers (again). Learn the facts behind the Measles, Masterminds & Millions in this 6-part series.

• In 1994, the Clintons masterminded the mandatory Vaccines for Children Program – The same year, was the last U.S. measles “outbreak” resulting in zero deaths and 30% of the 963 cases chose not to vaccinate citing religious or philosophic reasons • Big discrepancies and misrepresentations in reporting by major news outlets and the CDC website pertaining to the measles outbreak • The Gov. Vaccine Injury Compensation Program has settled $4.1 billion in vaccine injury and death cases behind the scenes, paid for by taxpayers, and Obama added more vaccines to the compensation list in December 2016 • The vaccine industry is expected to hit $100 billion by 2025. The Clintons have collected their fair share. • Merck & Co., the exclusive MMR vaccine manufacturer, is embroiled in a lawsuit against its own scientists who blew the whistle claiming Merck falsified the efficacy rate

• Mandatory MMR vaccines for measles with fines up to $2000 in NY, quarantines in CA, and countless new vaccine bills on the docket to eliminate religious exemption

PART I: The Clintons Masterminded The Mandatory Free “Vaccines for Children” (VFC) Program in 1994 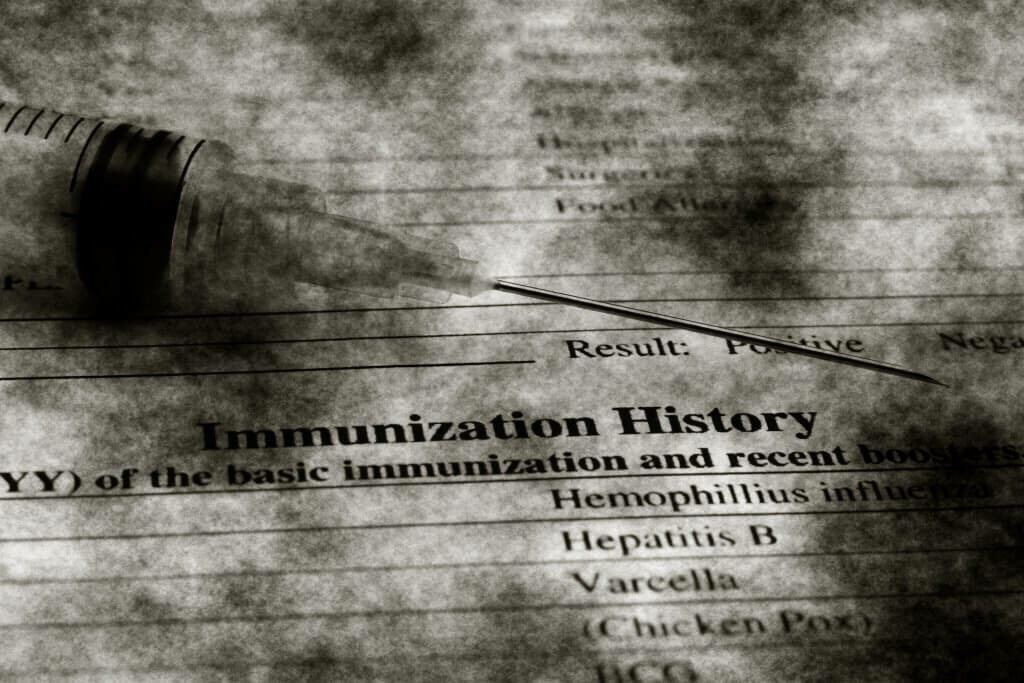 1986 The National Vaccine Injury Compensation Program was established to ensure the manufacturers weren’t liable. This put the liability on the government to handle all injury and death related vaccine cases behind the scenes, while taxpayers footed the bill.

1992 During the presidential campaign, Bill and Hillary Clinton said that the measles epidemic was the result of the Bush administration’s failure to provide poor and middle-class children with access to vaccines.

1994 The free mandatory Vaccines for Children Program was launched.

They pulled out all the stops to obtain the funding for the vaccines. They pushed the narrative that immunization levels were low because vaccines were too costly, and without a vaccine entitlement, the children would be exposed to the risk of disease. Donna Shalala, then-U.S. Secretary of Health and Human Services (HHS) appointed by Bill Clinton, reported that the immunization rate was at 55%. Shalala served for eight years, the longest HHS Secretary in U.S. history. George W. Bush later hand-picked her to co-chair with Senator Bob Dole on the Commission on Care for Returning Wounded Warriors. She was given the Medal of Freedom from Bush, and went on to receive the Nelson Mandela Award for Health and Human Rights in 2010. Shalala ventured back to the Clintons to serve as President of the Clinton Foundation from 2015 to 2017, and currently serves as a congresswoman to Florida’s 27th District.

Every major newspaper jumped on board, reporting that vaccine prices rose astronomically and the immunization rates were the lowest in a decade. What they forgot to mention, was the fact that newly added vaccines made up for a large portion of the increase in cost, not to mention the federal excise tax. In 1977 vaccines cost $11, but by 1993 they had increased to $200 due to hepatitis B and haemophilus influenzae B being added, in addition to the federal excise tax.

The Children’s Defense Fund stepped in again, and rereleased information showing that the United States had a lower immunization rate than most countries. In short, the congressional debate didn’t last long, the Clintons got their way, and the vaccine entitlement became law. This eliminated a private market for vaccine purchase and delivery. Price controls were imposed on existing vaccines and new vaccine prices had to be negotiated with the administration. Pediatricians had to abide by fee caps.

An unelected board of pediatricians was put in charge of determining which vaccines would be added to the entitlement. The government would centrally control the ordering, storage, shipping, and delivery of pediatric vaccines. All uninsured children would receive free vaccines and insured children would automatically be covered for vaccines. Under this new law, Federal and state governments, which were previously purchasing about half of all childhood vaccines, would be increasing their purchase to 80%, leaving only 20% in sales to private doctors and clinics.

Arguments ensued when Clinton proposed buying up all childhood vaccines and distributing them from a warehouse in Burlington, N.J. Congress rejected that plan, but approved others. In 1995 they spent $511 million on immunizations and the purchase of vaccines, $938 million in 1996, and it kept climbing from there. The government spent $4.3 billion in the “Mandatory Vaccines for Children” program in 2017 alone. According to ASTHO, the price to fully vaccinate one child in the public sector increased from $282.19 in 2000 to $1,894.52 in 2014, the last year data is available. The cost increases are in part due to adding new vaccines and inflation rates. Children currently receive 28 shots of vaccine cocktails by the time they are two-years-old. Federal funds pay for approximately 95 percent of all publicly funded vaccinations. Federal funds = taxpayer dollars.

The VFC officially launched in 1994 through the CDC, providing free vaccines to children who are not covered by insurance, and is a part of every state’s Medicaid plan. To streamline this, doctors are enrolled in the program.

In 1993, the National Center for Immunization Program was created to operate in Atlanta under the CDC. In 2006 it changed its name to the National Center for Immunization and Respiratory Diseases (NCIRD). They are responsible for the planning, coordinating, and conduct of immunization activities in the U.S. They support and supervise state and local agencies working on immunization activities and commercial contracting for vaccine supply and distribution. They also assist health departments in developing vaccine information systems to identify children whose parents have not complied with local vaccination laws.

The Federal government controls every aspect of the vaccine industry. The distribution is not rolling out of a warehouse in New Jersey like the Clintons had originally planned, but it is indeed being overseen by the government on every level.

This was a report and chart put together by Health Affairs in 2005. It is a 12-page segment from their book that breaks down the “U.S. Vaccine System.” Health Affairs is a peer-reviewed healthcare journal that is described by the Washington Post as “the bible of health policy.” 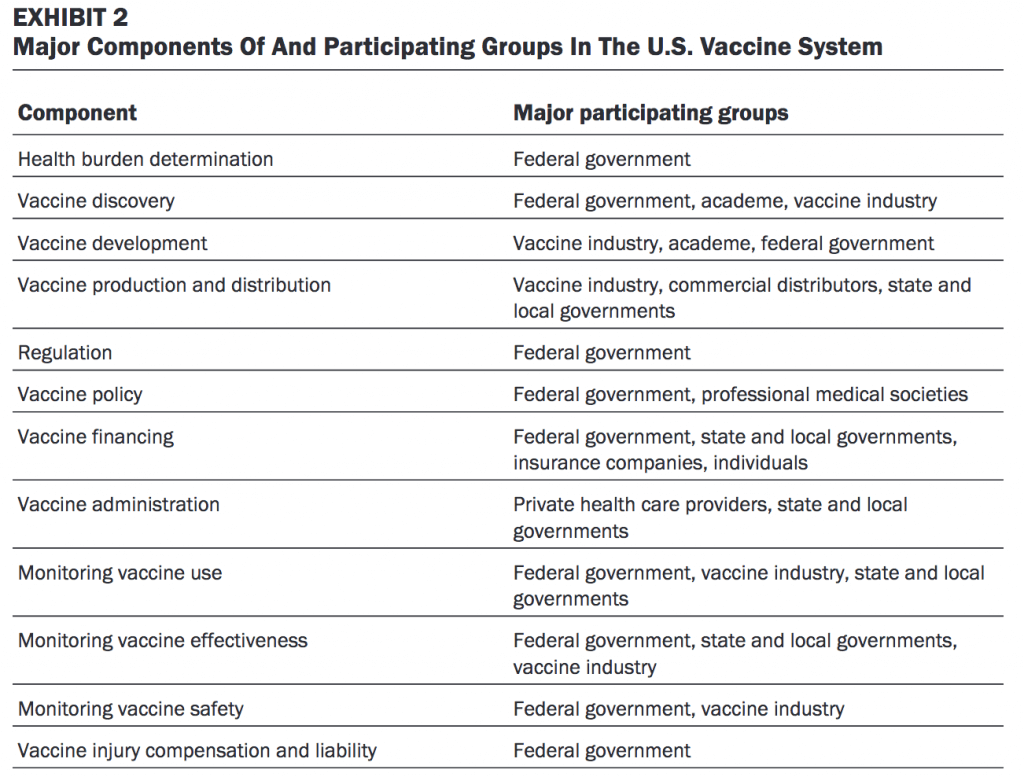 Whereas the vaccine industry is completely controlled by the government, determining what mandatory vaccines will be injected into children, how taxpayers will be paying for 95% of those, when folks of all ages should be rounded up, quarantined, or fined if they do not get the vaccine – ultimately controlling the “health” of individuals across the entire country – it would seem when it comes to abortions and the life of a baby, the opposite is argued.

On April 24, 2019, Hillary Clinton, the very same person who put all of the above in motion for government to control the health of individuals, tweeted this while quoting the judge and agreeing with his decision.

A piece of good news for reproductive rights: A judge has blocked the administration’s Title X gag rule. “At the heart of these rules is an arrogant assumption that the government is better suited to direct women’s healthcare than their providers.” Indeed.

The Clintons maintain their involvement with the vaccine industry until this day, under their illegally-formed Clinton Health Access Initiative.

On May 2, 2019, Health and Human Services released a 440-page ruling and fact sheet on “Protecting statutory conscience rights in health care; delegations of authority” which clarifies the protection of health care individuals and entities on the basis of religious beliefs or moral convictions. Whereby, there were protections put in place for doctors not wanting to perform abortions, unfortunately, for those not wishing to administer vaccines or for those not wish to receive vaccines, those laws are left up to the individual State laws.

That said, as of January 2019, 29 states and DC have a religious exemption law and 18 states have a religious and philosophical exemption law, which allow parents to claim an exemption based on their personal, moral or other beliefs. But, they are eagerly trying to change that landscape and remove exemptions from multiple states, while adding the HPV vaccine to the list of mandatory vaccines for children.

Just how big is the vaccine industry? Revenues are expected to reach nearly $60 billion by 2020 and $100 billion by 2025, which is almost double what they drove in back in 2014. Why? Because of the increase in infectious diseases, not to mention the fact that they have more than 120 new products in the development pipeline. GlaxoSmithKline, Pfizer, Sanofi, and Merck & Co. are the big guns, but London-based GlaxoSmithKline is the global leader in vaccines based on revenue. The United States is the world’s largest national market for vaccines, and North America is the largest regional market. Pretty soon, vaccines will rival the $150 billion dollar human trafficking industry.

The Clintons have received hundreds of thousands of dollars from big pharma and vaccine manufacturers over the years. Just how much have they received from Merck – the exclusive manufacturer of the MMR vaccine for measles? More on that coming in part four. This is laying the groundwork for how the Mandatory Vaccines for Children program got started, and how it all ties into this vaccine web and the measles outbreak.

Stay tuned as Corey’s Digs breaks down this entire web of “Measles, Masterminds & Millions” in subsequent Digs that will be rolling out in segments.

Who At The White House Is Giving A Tremendous Amount Of Pushback To CBS On Benghazi?