Obama enjoys being a President of firsts.  Many of his firsts are based in false images of falsely represented heritage, or ill-gotten academic success, and yet many are assaults on our Constitution and liberty; a systematic dismantling so egregious that it was once only believable as a plot in a thickly layered espionage novel.

Obama has followed up with original “firsts” by being fawned over as he was coined the first “actual” black president.  Though, many rightly question his true parentage,  we do know he chooses to embrace his “black side” as his heritage.

Newsweek recently bestowed on Obama the title of “The First Gay President”, as a result of his love and support of homosexul “marriage.” This is another “first” for him, in the persona department. 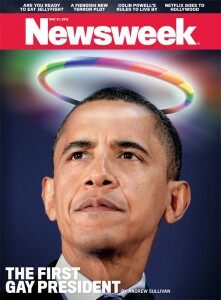 Various Soros loving media outlets have also called him “The First Female President”, “The First Asian President”, and “The First Hispanic President”.  Obviously, his ethnicity isn’t all of these (as far as we are aware), but rather which special minority groups he coddles in order to manipulate the masses.

Rather than striving to enact leadership that would recognize him as being identified with achievements such as a “fiscally responsible President”, or a “President with strong foreign policy and defense”, etc., he would rather be associated with whichever group he can best morph himself into. This personal identification and sympathizing is all an effort to sell his Marxist agenda, thereby manipulating huge groups of people looking for their swift ride on the anti-American waves of the Socialist tide.

However, just recently Obama has been crowned with a title he’s spent his entire Presidency trying to avoid.  This title has far more credibility than any other he’s been associated with.  Whistleblower magazine has named Obama as “The First Muslim President.” 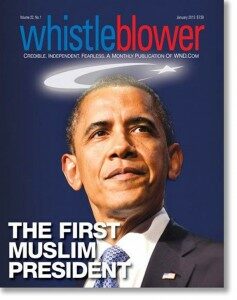 Barack Obama’s relationship with Islam has long been one of the most radioactive questions surrounding his presidency. Before the 2008 election, it was considered impolite in the extreme even to mention publicly Obama’s middle name, “Hussein,” a name given only to Muslim babies. And despite repeated polls showing a significant percentage of voters – one in three conservative Republicans and almost one in five of all voters – believe the president is currently a Muslim, those who dare bring up the issue are mercilessly scorned as ignoramuses and bigots.

Yet, there’s a side to Obama’s life, from his Muslim childhood, schooling, Quran studies, mosque attendance and prayer in Indonesia, to his bewilderingly pro-Muslim policies today as president, that has been carefully concealed from the public by the “mainstream media.”

If you’ve wondered why the current U.S. president seems so supportive of the Muslim Brotherhood – both in the Arab-Muslim Middle East and, in the form of its various front organizations, within America itself – “THE FIRST MUSLIM PRESIDENT” will open your eyes.”

At least some media publishing house is “calling ’em like they see ’em.”  Obama may be black, white and red all over, but this truthful tidbit by-line has long since been overlooked by the liberal media.  They have neglected the questions about his associations with known Afro-Centrist Islamists, Communists, Marxists, violent revolutionaries and the Muslim Brotherhood, in favor of handing out “cutesy” smoke screen titles as the “First Gay President.”  Who are they trying to fool?

The homosexuals already love him for his adoration of what God calls abhorrent.  They do not need to be convinced of his agenda.  Those that need to hear the truth of his motivations need to be told like it is:  Sharia law and Muslim proselytizing by force to join hands with Marxism, is his end-game. Anti-America, Anti-Capitalist, Anti-White and Anti-Christian is the truth of what Islam is.   “Reverend” Jeremiah Wright teaches it, Farrakhan teaches it, Universities teach it, public schools teach it, and now Obama carries the torch of the agenda all the way to the White House steps.

Way to go, Whistleblower magazine, for having the courage to call this President just what he is:  In namesake, affiliations, funding, history, title and actions, he’s a Muslim through and through.

Sharia Law: Woman Gang-Raped By Muslims Then Jailed 8 Months Because They Were Not Her Husband

Sharia Law: Woman Gang-Raped By Muslims Then Jailed 8 Months Because They Were Not Her Husband