Anti Fed Ed Warriors, for the third article in my series exposing the 2020 Presidential hopefuls, we’ll be reviewing the current President and his Vice President, as far as education activities. We know that federally led education has NOT gone away, in fact, we’re further down the road to global conformity than ever! As I said in Part One, this is about our children, not demagogue worship. 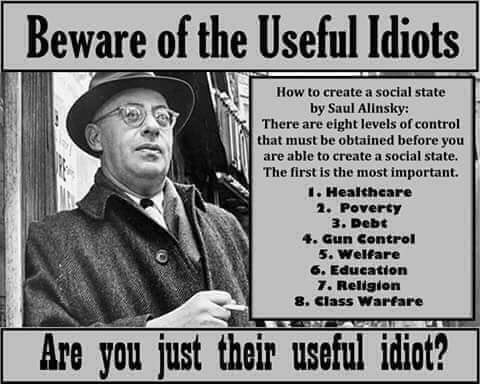 If you missed Part One, I gave you the set-up for how the series would run, as well as look at the Senators running for the Oval Office. In Part Two, the House of Representative’s candidates as well as former federal leaders. Still to come, in Part 4 are the State level candidates. Part 5 will close us out with private citizens seeking the President’s job and some general election information.

It’s important we exercise our voices (prudently) in shaping which candidates move to the next round in the election cycle.

Warriors, I’m beginning with the President/Vice from post-election (2016) to present. Why? I want to lay out, for you, the truth.

Something mainstream media and even the CCSS Machine have neglected to do thus far. As I stated in Part One, my purpose is NOT tell you whom to vote for, nor am I ‘picking’ on any one candidate moreso than the other. I cannot, in good prudence, exempt our sitting President and Vice President from this series.

We deserve to know exactly how deep the CCSS Machine ties go with each of these candidates. Our votes are precious. We’ve been lied to and put off time and time again.

From my article, “Does It Really Matter?”, I posed some pretty tough questions for all of us to share with those newly (or re-elected) leaders. We knew the promises to end Common Core were handed out liberally, the pledge to stop the obsessive data rape, assessments, and, all that connected (which STILL connects) them. How? Mainly ESSA (Every Student Succeeds Act) and WIOA (Workforce Innovation and Opportunity Act). Don’t forget the HEA (Higher Education Act), it’s part of the birth to death alignment foundation (which is almost 100% complete).

I gave you an in-depth look at the CCSS Machine alignment of the Vice President. 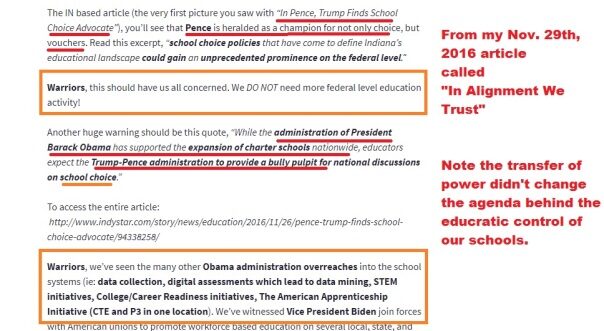 Also included in this article was Pence’s love and promotion the cradle to grave workforce prep (CTE) education has become; Congress, EdChoice, and more about the CCSS Machine.

Jan. 7th (just before the Inauguration):

From my “Lessons Learned” article, Betsy DeVos’s hearing to lead to her appointment as the U.S. Sec. of Education. 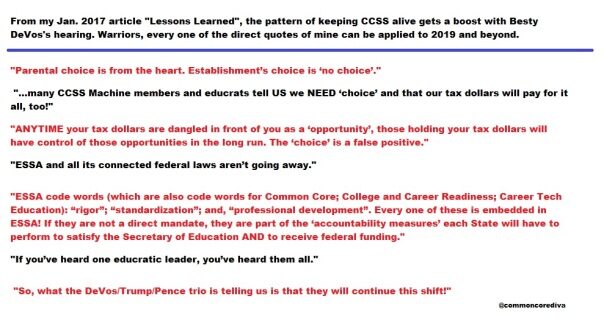 Feb’s “CCSS/CTE BS Alert!”, shared this truth nugget. Sure, previous Administrations BEFORE the Trump/Pence led one were responsible for also violating our Constitution. However, THIS Administration promised and pledged to halt it. (2019 note: they haven’t). 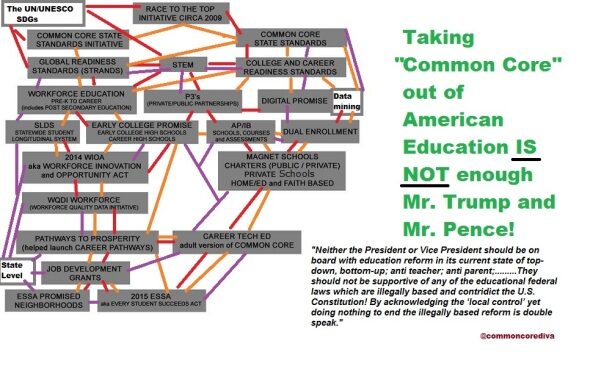 (*Note: in the original article there is a spelling error in the screenshot. That has been corrected in the above image. I point this out so that if you choose to share it, you’ll have the correct image.)

From 2018, my article explaining how damaging the President/Vice President/Congressional expansion of ‘school choice’ via education savings accounts to promote school choice.

In August 2018, I showed you the Trump 26 Step plan to implement a national workforce council. This will intersect education and jobs in some serious ways. (*Note: The 2019 article I wrote detailing the Council’s first meeting is below. Look for the ‘*knowing’.)

Below is a screenshot of my October 2018 article showing the Trump Administration’s National Security Plan and its’ inclusion of the UN’s SDGs. (*Note:  This article also discusses the 12/31/18 exit from UNESCO.) 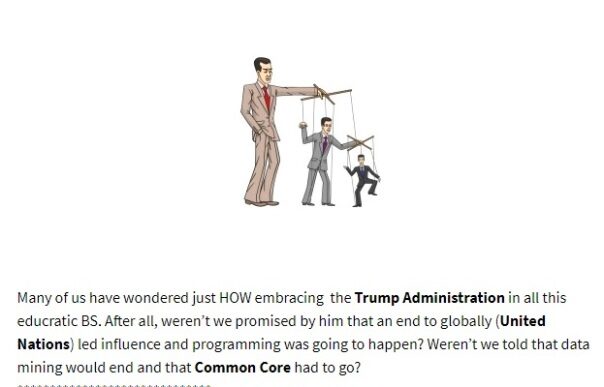 Warriors, as you know, I’ve shown you how STEM/STEAMare change agents tools of the United Nations. Both ourPresident and Vice President fully support these tools and have done everything possible to increase their presence in our nation. Add to this that the Administration promotes STEM without hesitation.

I hope this disturbs everyone who reads this. Why? Because to support the UN in this manner is un-American. To support the UN like this directly embeds the SDGs (Sustainable Development Goals) into our schools, our homes, our communities.

From my article, “Operation Alignment”, I shared the grave concern and warning bell of President Trump’s support for STEM. Remember, he’s made headlines by removing the US from some UN entities. I urge you to look at the evidence. It speaks otherwise. Even what portions we’ve been spared, the UN presence is still there. How? Because ANY funding or participation in ANY UN (or related) group ensnares us 100%.

Warriors, if this doesn’t concern you, then maybe *knowing the current pick for the new US Ambassador to the UN is tied to the CCSS Machine in some scary ways.

Advancing both STEM and CTE via Executive Orders has unwittingly set America up for more indoctrination and academic-less ‘education’ (aka: workforce prep). Using Executive Orders also bypasses ‘We The People’. Especially where education is concerned. However, this abuse of power isn’t exclusive to one Administration.

When the President released his Proposed FY 2020 Budget, I broke it down for you to expose the numerous federal agencies and programs apprenticeships, STEM, and, CTEwere embedded in. Add to that, the U.S. Dept. of Education’s Proposed FY 2020 Budget, you’ll find CTE and STEM (thus, apprenticeships) united. (*Note: see pages 7, 11, 26, 27, and, 42. Page 7 shows federal funds for STEM research and development; Page 11 shows the huge increase requested for FY 2020 ($300 billion), in FY 2019 was $130 billion. Page 11 also shows the STEM Teacher Incentives are set at $200 billion. Pages 26 & 27, show the CTE/STEM total cost will be about $1.3 billion; lastly, Page 42 shows mandatory STEM for Hispanic serving institutions.)

The one thing both STEM and CTE survive on is ‘competency’. The Trump Administration chooses to use a lesser evil sounding word, ‘skill based’. If you think that simple word choice won’t mean much in the 2020 Presidential election, then I offer this article.

(Source, emphasis added is mine)

1) Warriors, I covered the Tax Cuts and Jobs Act in Parts One and Two of the “Prudence Files”.

2) To see how education is negatively impacted by the USMCA (US/Mexico/Canada) Agreement (New NAFTA), I covered that during the mid-term elections and updated it earlier this year.  (*Note: in the updated article, look just above the cow picture.)

3) If you didn’t know it SNAP and CHIP federal funding goes to the States to use in healthcare, education, and welfare.SNAP and CHIP are even in ESSA. How will they ‘show up’ in use? SEL (social emotional learning), mental health, behavior interventions, food, and, more. Speaking of SEL, the President’s re-election said zero about First Lady Trump’s “Be BEST” campaign. Major portions of that are SEL overreaches.

Show Us The Money:

Warriors, in my “The Prudence Files” series, I’ve shown you the education stances, the legislation, and, the CCSS Machine funding. Will the Trump/Pence 2020 team find themselves among the many Senators and Representatives (current or former) who I’ve already exposed?

Here’s a screenshot about Gov. Pence as a candidate for Vice President:

(Source)
To see the Chase Bank/Prince evidence, go here. To see the JP Morgan Chase evidence, that’s here. Then, go back to Parts One and Two to see the others receiving campaign dollars from Chase.

From Open Secrets, the Great America Committee 2018 donations. The tie? VP Pence. From the same website theGreat America information about PAC to PAC donations. Again, the tie is VP Pence. The CCSS Machine groups are many. Some are AT & T, MetLife, Ford Motors, Big Pharma, Big Biz, Big Law/Lobbyists, and, Big Insurance.

For the inauguration, some top donors for (President) Trump (of the CCSS Machine members were Home Depot’s CEO and the Crafts, as in Kelly Craft who has been tabbed as next US Ambassador to the UN.)

As far as the 2016 election and Candidate Trump, Disney Corp. was among his contributors (as we know Disney is a big CCSS Machine member).

As far as the 2020 Trump/Pence campaign, the tab is at $67.5 million according to Publicintergrity.org

The Federal Election Commission has thousands of campaign donation records for the Trump/Pence ticket from the previous and current campaigns.

Of concern to most parents is the massive amount of  ‘student data rape’ in education. We know that Facebook, Google, Microsoft, IBM, Dell, Apple, and, others are involved in this. We know the ending data collection was an empty 2016 promise. So, will it be different this time? It doesn’t look good when you consider ex-Cambridge Analytical employees are managing the 2020 Trump/Pence team. How will this connect to education? My fellow Warriors at Missouri Education Watchdog covered that in this article.

We also need to note that the SBA (Small Business Administration) is a CCSS Machine member. The Director of the SBA (McMahon) has stepped down to serve on the Trump/Pence ticket for 2020.

If you’re seething, I hope it’s because the truth has woken you up. As you can see, I don’t make this stuff up. Am I disappointed in our candidates running so far? You bet.  Will the candidates from State government and the private sector be ANY better? Join me for Parts 4 and 5. If there’s ever a time we need a real Anti Fed Ed Warrior, not a CCSS Machine sellout, it’s now!

Will Creepy Joe Biden Spell Disaster For Democrat Party In 2020?

Can New Voices Of Rudy Giuliani, Judge T. S. Ellis & Others Turn Probe Into An Indictment Of Mueller & Co?

Can New Voices Of Rudy Giuliani, Judge T. S. Ellis & Others Turn Probe Into An Indictment Of Mueller & Co?