The Second War of Independence has been declared

There is a sickening aroma in the air that is beginning to permeate the very soul of independent freedom embracing Americans. It began to originate long before the shooting at Aurora, Colorado, or recently in Newtown, Connecticut. Its rancid fragrance seeps into the fabric of the U.S. Constitution and is emitted by the control terrorists who manipulate the facts and perceptions of Americans who watch the news. These purveyors of stricter gun control measures seek to erode your defenses so that in your weakened state you will accept their sweet smelling tyranny.

The nation that was represented as a symbolic shining city on a hill that President Ronald Reagan spoke about over 30 years ago is now becoming a broken mud hole of shattered dreams. America’s morning that has dawned over the nation is now bearing witness to the shredding of constitutional protections which have safe guarded families since the infancy of the republic. Obama has given the order to Vice President Biden: full steam ahead to obliterate gun rights in your town. You and your family are the targets and what will you do?

The reaction by gun owners and even prospective gun owners to Obama’s desperate executive order zeal is to hurry up and buy up all the potential guns and now legal weapons. The worry is that these legal weapons might be taken by edict or by force by the government. That may be a logical solution, but it is only a temporary one.

Once Obama’s federal government has quenched its thirst on stripping away gun rights, it will not hesitate to take the next step to criminalize actual possession of legally held banned weapons!

Then what will you do?

What is the response to a government that embraces tyrannical rule over the constitutional guarantees and protections contained within the U.S. Constitution?

What are you, the father, the mother, the son or the daughter prepared to do when, the government official, acting on direct orders from a new commission set up by President Obama to confiscate your guns, comes to your home’s door?

Where are the defenders of the U.S. Constitution who are elected in Congress? Are you absolutely certain they will not give in, and knuckle under Obama’s determination which is aided by the mainstream media talking heads?

Remember these are the same talking heads that avoided Obama’s dismissive behavior in not enforcing congressional legislation. This is the same mainstream media that buried the White House Benghazi murder cover up as if it never happened. Think about your choices when seeking to rely upon the once independent fourth estate, which has been rendered a useless patsy for the Obama administration. 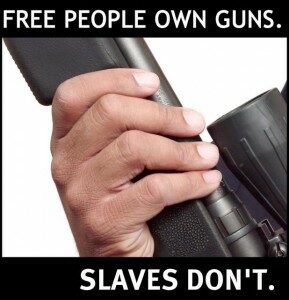 Do you really believe that once your guns are banned, and the weapons that were grandfathered in and off limits from government seizure, will not be taken in the second round of gun control legislation?

The first War for Independence initially began with a flurry of gunshots which rang out in Boston on March 5, 1770. There Americans drew the line in the sand against British imperialism and tyranny. The first to die, Crispus Attucks a black man, and the 20 others with him had sticks and clubs, and the British soldiers had guns. Obviously sticks and clubs were not a match, then nor are they now.

John Hancock, one of the nation’s founding fathers spoke of that legendary heroic moment, by urging, “… for a well-regulated militia of the whole people who would fight “for their liberty, and for themselves, and for their God.”

Unfortunately, for the tragic victims of New Town, Connecticut, the Obama led federal government in Washington, is moving to disarm its citizens by using the very laws that Hancock and other founding fathers fought so desperately for. Instead, Obama, Biden and gun control mayors like New York City’s Michael Bloomberg, continuously assault the U.S. Constitutional Second Amendment rights. They work to manipulate this tragedy to lead a sustained assault on freedom of defense against such government tyranny.

The goal of the gun control activists is clear. They use their partnership with the mainstream media to paint a portrait of tragedy across the television screens of America’s living rooms and blame guns as the cause. They seek to nurture, cajole, neutralize or tempt Americans with the notion that guns created the havoc, and misery and tragedy that befell the victims.

The mentally unstable assailants who pulled the trigger and who designed the loathsome events are never held to account for any responsibility in perpetrating the heinous deeds. The incredulousness of the targeting of legal gun owner rights rationale defies reason. Taken to a logical conclusion, you would have to think the gun trigger actually forced the assassins to pick up the weapon and pull the trigger.

America, if you fall victim to this prospective criminalization of your own legal rights, then the forces of Obama and his socialist tyranny have already won half of the battle.

On Tuesday, January 15th, Vice President Joe Biden is going to submit his gun control task force report to Obama. After that, the full on assault will begin over the next several weeks in the nation’s capitol.

You should not wait and see what will happen in Washington D.C., during this legislative battle. This has to be a time where you, the defender of your house, your home, your castle, truly take steps to embrace the tasks of true constitutional vigilance. This vigilance begins in your home, and not in Washington D.C.

Each American must determine that they are ready to speak to their neighbor, family member, co-worker, or friend, and ask, “What are you prepared to do, to hold your congressman or woman responsible?”

The congress cannot pass a law unless both houses pass the legislation to begin stripping your rights and the President signs it. Biden has insisted that Obama will soon, after receiving the vice president’s report, move to use an executive order to enforce stricter gun control measures. If he does it, demand it be over ridden and demonstrate until it is over ridden!

The Second War of Independence is not when you begin to see the Obama gun control brigade at your door, it begins when you decide to do nothing, and just let it happen.

Father Of Slain 6-Year-Old Sandy Hook Victim: "Gun Laws Are Not The Problem"

Father Of Slain 6-Year-Old Sandy Hook Victim: "Gun Laws Are Not The Problem"