It isn’t just Michigan Rep. Rashida Tlaib (D) who should be impeached for her profane threats against President Donald Trump, as well as her un-American stance on virtually everything, but Minnesota Rep. Ilhan Omar (D) should also be facing impeachment due to her ignorant, hateful and utterly dishonest tweets about the Covington Students, which she deleted after she was warned it was libel by an attorney.

Following what is now known as a “non-incident” that was used by the media to divide people, Rep. Ilhan Omar (D-MN) tweeted out libelous statements regarding the Covington students who wore MAGA hats to a protest and were libeled in the media for simply smiling at a leftist Native American activist, who they improperly labeled as a “Vietnam veteran.”

Responding to a tweet from President Trump, Omar wrote,

“-The boys were protesting a woman’s right to choose & yelled “it’s not rape if you enjoy it” -They were taunting 5 Black men before they surrounded Phillips and led racist chants -Sandmann’s family hired a right wing PR firm to write his non-apology.” 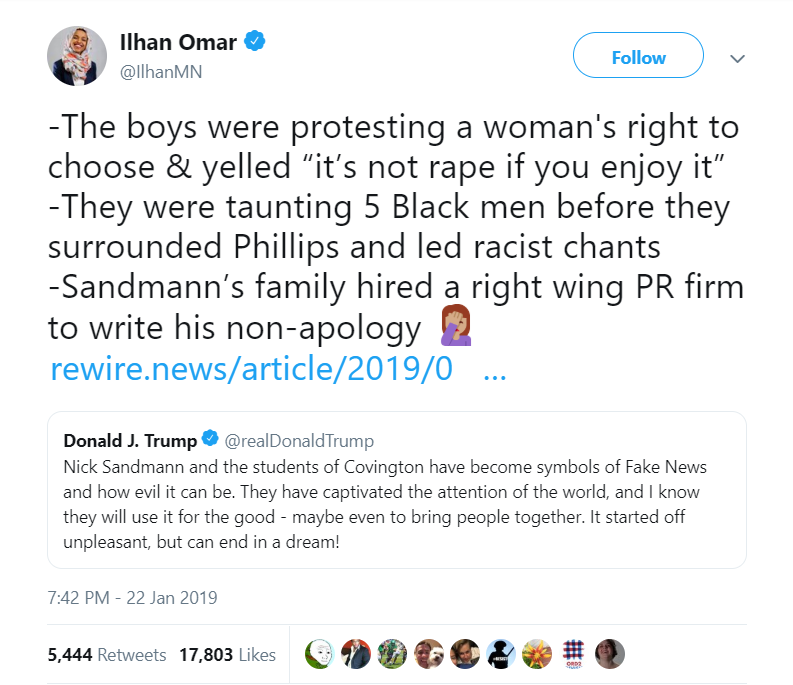 Of course, she was lying because she is a known liar, but then what do you expect from a woman that married her brother and follows the teachings of a demonic pedophile, thief, rapist and false teacher?

However, before she could delete her tweet, it was archive and an attorney who’s offered to represent the Covington students for free said it had defamed them.

“This is libel. Retract, or get sued,” Las Vegas attorney Robert Barnes tweeted.

This is libel. Retract, or get sued. https://t.co/18DO7vHOLN

Omar’s rape-related claim apparently was based on a video clip posted on Twitter by lawyer and Playboy magazine writer Amee Vanderpool, who admitted she didn’t “know if this boy attends Covington.”

Of course, it wasn’t just a threat of libel.  Omar faced a backlash on Twitter for her comments.

Hi @IlhanMN here’s a fact-check:• The 1 boy who said that was not with the Covington Catholic group• The 5 Black men called the boys f*ggots, crackers, racially taunted a Black boy, the boys didn’t retaliate

• Show us one racist chant on video from the boys, there isn’t one

– Oh, and they called other black people ‘n***ers’

Honestly, how are you this shameless?

Wow. This is mind-bendingly false. https://t.co/7lRJPCBHbZ

Vile tweet. The kid who made who made the rape comment wasn’t Covington Catholic. The black adults were viciously taunting the kids with racist and homophobic comments.

Oh and any sane kid would use PR help if he could to write the most important statement of his young life. https://t.co/WjYW1hzdwD

You are a shameless liar!

Not only did the boys not taunt the “5 black men,” but it was actually the 5 members of the Black Hebrew Israelites who taunted not only the boys, but other black men AND women who tried to interject & stop their racial slurs against Native Americans! pic.twitter.com/OqDqxqGr0I

You are evil. If Democrats had any standards, you would have already been censured. https://t.co/FozsUpMalh

Of course, Twitter did nothing to her for her harassment and libel, unlike them banning me over my tweet to a woman supporting anti-American Muslims and their lies on Twitter.

Omar is one of several immoral Democrat women leading Congress in 2019.  She’s already flown in the face of congressional rules that prohibit the wearing of hijabs on the floor of Congress, and Omar was found to have used state resources to conduct her own personal business according to new information obtained by State Representative Steve Drazkowski (R-Mazeppa).

The fact that this woman is even in DC undermines our system of justice.

Ilhan Omar is a Somali refugee who moved with her family to the US in 1995.  Although she was naturalized as an US citizen in 2000 (which was barely enough time for her to complete the requirements for citizenship), but one has to wonder if she even knows what it is to be an American.

Her actions and statements clearly demonstrate that she has no idea of our foundations or what our Constitution means by what it says.  It’s time to bring the issue of impeachment up against Omar, Tlaib and several other freshmen representatives, as well as some older ones and remove them from our government.

Louis Farrakhan Claims To Be Jesus In ‘Saviour's Day’ Address: ‘I Am The Messiah’

Louis Farrakhan Claims To Be Jesus In ‘Saviour's Day’ Address: ‘I Am The Messiah’