Trump is Right: John McCain Deserves No Respsect because he is a Wicked Man Who Supports Islamic Jihadists Who Kill Christians

G.K. Chesterton once said that “whenever we see things done wildly, but taken tamely, then the State is growing insane.” If indifference to evil is the mark of insanity, then I must say that the nation is being ran by the prisoners of the mad house.

The things that are truly sinister and utterly diabolical, and that bring our eternal souls onto the thin line under which is hell and above which is Heaven, are losing our most deserved attention, an attention swayed by popular media and refocused on news events that have no place in eternity, and will mean nothing once the measuring rod of time transpires into but a few passing moments, moments that come and dissipate as the spring leaf comes and dries into pieces in the peak of summer.

The country heard of the babies being cut to pieces by Planned Parenthood, paid some attention to it, and then rushed to trendy gossip. The media took the massacre at Charleston, and made it as propaganda against the Confederate flag, and people justified the removal of the flag with the killings. Planned Parenthood has murdered countless helpless babies and sold their body parts, and did anyone in the media use this genocide as an argument to remove Planned Parenthood? No. This is how you know that the media doesn’t care about human life, it sits on the deaths of people to push an agenda.

When Planned Parenthood was found taking donations to specifically butcher black babies, did any of the useless sycophants desecrating Confederate monuments or the leftists call for the shutting down of Planned Parenthood? No. Because they are just plain hypocritical and evil.

The media creates all sorts of distractions to take away your attention from what true evils are occurring right now. Instead of conservatives striving for the removal of Planned Parenthood in the nation, and guiding our internal exasperations against Islam by fixing our focus on the story of the four murdered marines, they would rather cannibalize each other over whether or not Donald Trump was right on what he said about John Mccain not being a hero. Listen, I don’t think Trump hates veterans; I don’t think he has some inexplicable vehemence against people who fought in war. He donates money to veterans. I think its obvious that he said it in the heat of the moment, and we tend to say things against those we hate, that we would not really hold strongly to once the anger subsides.

If anyone is indifferent to the sufferings of soldiers, its John Mccain. He was all for the war to remove Saddam Hussein, who was keeping control of the Middle East and killing terrorists. Thousands of soldiers lost their lives in the Iraq War and in the later occupation of Iraq which was done to contain the violence that Saddam was already keeping a lid on. Tens of thousands of soldiers were injured and wounded in Iraq. And for what? To fight terrorists who were being persecuted by Saddam, a monarch who was the supposed reason for invading Iraq in the first place.

I confess, I was was once a part of the fold of Republican propaganda. When I was in Jr. High and High School I believed George Bush and thought America as a force for good for invading Iraq. It took a few years, but I eventually came to the realization that it benefited no one but Iran, who is now taking control of Iraq, and the terrorists, who were glad that Saddam was removed so that they could be enabled to wreak havoc and slaughter Christians and other people.

In fact, ISIS itself knows this to be true. ISIS thanked John McCain for supporting the Iraq War that would only strengthen the terrorists to expand its sharia utopia, stating:

…the crusader John McCain came to the Senate floor to rant irritably about the victories the Islamic State was achieving in Iraq. He forgot that he himself participated in the invasion of Iraq that led to the blessed events unfolding today by Allah’s bounty and justice.

On top of supporting the removal of Saddam, McCain took no issue in punishing America to provide the Muslim terrorists in Syria with automatic weapons, anti-tank weaponry, bullet proof vests and numerous other dangerous arsenals. Senators John Mccain, Joseph Lieberman, and Lindsey Graham, together released a statement calling for military intervention, and weapons and ammunition supply for the rebels:

What opposition groups in Syria need most urgently is relief from Assad’s tank and artillery sieges in many cities that are still contested. Providing military assistance to the Free Syrian Army and other opposition groups is necessary, but as Assad continues to intensify his assault, that alone will not be sufficient to stop the slaughter and save innocent lives. The only realistic way to do so is with foreign airpower.

It would be only dangerous for the U.S. to lend support militarily to the Free Syrian Army; for this group is but an oppressor, kidnapping, torturing, and murdering any who are against their cause. The targets are counter-revolutionaries, Christians, Shia, Alawites, and government workers. But nevertheless, these three senators have been vocal with intense opinions on giving weaponry, ammunition, and air support, as they make clear in their own statement:

The ultimate goal of airstrikes should be to protect civilian population centers from Assad’s killing machine and establish safe havens in which opposition forces can organize, rest, refit, and plan their political and military activities against Assad. These safe havens could serve as platforms for the delivery of humanitarian and military assistance – including weapons and ammunition, body armor and other personal protective equipment, tactical intelligence, secure communications equipment, food and water, and medical supplies. These safe havens could also help the Free Syrian Army and other armed groups in Syria to train and organize themselves into more cohesive and effective military forces, likely with the assistance of foreign partners, and provide political space for the Syrian National Council to organize on Syrian soil.

During an interview with Greta, Mccain had a slip of a tongue and actually said that he wanted to support ISIS (start at the 4:00 minute mark):

Here is a video of McCain pushing for the US training, sending arms to, and providing Air Force support for Islamic terrorists in Syria:

The Free Syrian Army was the first major terrorist group to fight Assad, and it was the most trusted group for the US. But now, the FSA has been significantly absorbed into ISIS. The supporting of the FSA would only help ISIS, and if anything, would only help advance the Islamist cause establishing a caliphate in the Middle East. Here are photos of Mccain meeting with the FSA terrorist group alongside retired Army general Paul Vallely: 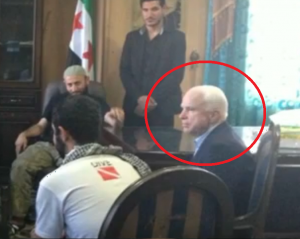 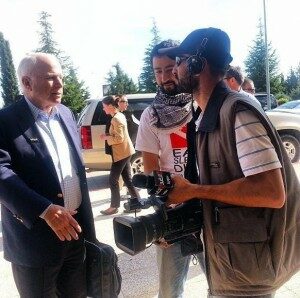 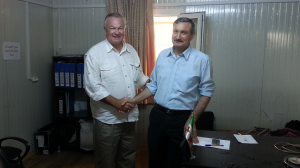 McCain says that he is for freedom and democracy, and yet he is helping the very enemies of liberty. Which means that he is a liar, and is actually for tyranny.

The evils of John McCain utterly surpass anything Donald Trump has ever said about him. Lets be very frank: John McCain is an absolutely evil and sinister creature; he is so evil he does not even deserve the title of being human. He wanted war against Saddam, that only led to the deaths of America soldiers and to the freedom for terrorists to execute violence and despotism, and to the further enabled creation of an international terrorist network, inspired by ISIS and far reaching all the way to the US.

John McCain is a giant bag of scum; his mouth is a continual sewer of bile, his heart is a decayed rot of dung, his mind a river of filth, and his soul is amongst the damned. He is nothing but a murderous scumbag.

His evils are so great, that the words of Trump don’t even bother me. McCain is a demon incarnate. His service in Vietnam does nothing to justify the evils he has supported and pushed for. At least Donald Trump was always against the Iraq War, and his reasons for doing so were absolutely accurate:

So enough out this fixation on the McCain controversy with Trump. The conservatives must unite and stop cannibalizing each other, and focus on fighting the actual evils amongst us: like murdering babies for their body parts; like demonic wretches murdering marines in the very country they are fighting for; or like John McCain supporting Muslim terrorists who kill Christians.

Verily I say unto you, that unless we combat these evils and destroy them, then we will be plunged into the endless oceans of insanity. The only solution is to come to the realization that we have gone mad, for, in the words of Chesterton, “once the man could become conscious of his madness, he would cease to be mad.” And the only way that this could happen is through God; for God is the Truth, and through Him “ye shall know the truth, and the truth shall make you free.” (John 8:32)

Facebook Users: A Psychological Warfare "Echo Chamber" Experiment is Being Conducted on you Without Your Consent

Facebook Users: A Psychological Warfare "Echo Chamber" Experiment is Being Conducted on you Without Your Consent