U.S. Senate Candidate Richard Cash Proves He is Not Funded by George Soros

In October 2008, Saturday Night Live aired a skit on the Fannie Mae/Freddie Mac bailout featuring parodies of a variety of culpable individuals, from Nancy Pelosi to Herbert and Marion Sandler to various freeloaders and schemers.  The skit ended with a parody of George Soros – “multi-billionaire hedge fund manager and owner, Democratic Party” – who explained that he controlled the situation, referenced his role in the crashing of the British Pound in 1992, and who controlled all of the other personalities in the skit. 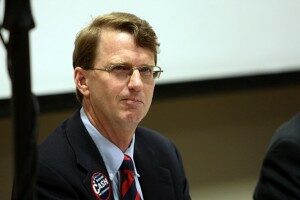 By the next Monday, the skit had gone viral and been pulled from NBC’s website.  All subsequent postings of the skit were pulled within just hours of being uploaded, and NBC released an edited version of the video, cutting off an entire minute of footage, including discussion of how the crash happened, part of Soros’s speech, and the reference to his role as “owner of the Democratic Party.”

Though that may have been the first reference to George Soros and his leftist political influence most Americans heard, it was certainly not the last.  Glenn Beck, for instance, has thoroughly researched Soros’s actions and connections and refers to him as the “puppet master,” because of his ties to nearly every progressive organization, individual and action.

Recently, South Carolina petition candidate Dr. Bill Bledsoe challenged Republican candidate Richard Cash, who is running against Sen. Lindsey Graham to disclose the details of the $200,000 that went into his campaign account. Cash has been very open and transparent about where the money came from.

Blogger Joshua Cook asked Cash how much money his campaign raised.  “Well our recent FEC report showed $275,000 in contributions,” Cash said. Cook asked if some of that money was his own personal money.  “I personally put in $200,000,” said Cash. “I am beyond committed. I mean with both feet and all eight children — this is about the future of our country.”

The broad FEC report was not detailed enough for Dr. Bledsoe so Cash disclosed his financial records of the stocks he sold to fund his campaign. See Video below.

Who is George Soros?

After WW2, Soros immigrated to the UK, where he lived with family and graduated from the London School of Economics in Philosophy in 1954.  He moved to New York City in 1956 and soon became an investor.  He sold short more than $10 billion in Pounds, helping to crash the British currency and earning about $1.1 billion as well as the nickname, “the man who broke the bank of England.”

Though his background is shocking, it’s his current connections and influence which provide true cause for concern.  Ideologically, he believes in globalization, a global economy, political system and even society.  He has said that the US will cease to be the world’s dominant power, is anti-capitalism, supports cap and trade, and is the head of the Open Society Institute, based on the works of Karl Popper.

He founded the OSI in 1993, a year after he crashed the Pound, and it is this organization which connects him to notorious progressive groups, such as the Center for American Progress, Tides Foundation, Friends of the Earth, Campaign for America’s Future, American Constitution Society, and the National Council of La Raza.  The mother of San Antonio mayor Julian Castro was a leader of La Raza, and Castro’s name has been floated as a possible 2016 Democrat presidential candidate.

Soros has supported presidential candidates in the past.  He met with Obama in 2006 and sent him the maximum legal campaign contribution within hours of the future president’s announcement of the creation of a presidential exploratory committee.  He’s visited the White House multiple times since 2008, and is also tightly connected to Van Jones.

From 1994 to 2002, Soros organized a “Shadow Party” – a network of activist groups used to mobilize resources, like money, GOTV movements, campaign advertising and policy initiatives.  In addition to the OSI, these include the Climate Policy Initiative, MoveOn.org, ThinkProgress, Media Matters, AlterNet and others.  MoveOn.org raises money for left wing candidates and political organizations.  Media Matters describes itself as a “progressive media monitor which tracks conservative misinformation.”  ThinkProgress is a progressive blog, and AlterNet is similarly used to disseminate progressive content. See networks here.

Soros also has his hands in higher education.  In 1991 he helped to found the creation of Central European University, an English language university in Budapest specializing in social sciences and humanities.  Indeed he has provided large donations to universities worldwide, including Russia, South Africa, Norway, the University of Phoenix, and most prominent institutions in the United States.  Since one of the goals of the Open Society is globalism, this is a strategic move.

On the left, Soros is known for his “philanthropy,” but that philanthropic money goes to political causes supporting his own anti-capitalist, anti-borders, anti-religious, progressive worldview than it does to truly making a difference in people’s lives at the ground level.  Indeed multiple times in his life, he has specifically profited from the misfortunes of others.

Soros’s influence in American – and world – politics cannot be underestimated.  Even without the so-called “conspiracy theories,” he is undoubtedly a leftist with dubious morals and influence on the majority of progressive media, political and educational institutions nationwide.  Instead of building a personal brand which could be directly opposed, as Andrew Breitbart and Glenn Beck did, he transferred his influence to others.

Dispersed, this influence is hard to oppose, and these ideas seem more popular and universal than they actually are.  His media ventures put forward stories and falsifications which filter through the mainstream media, and indeed he has also donated millions to NPR.  Institutions of higher education advocate similar ideas to continue procuring funding, and politicians with similar ideas – including Chris Christie – look to Soros for support, both financial and otherwise.  Soros is an unquestionably powerful individual with influence across the societal and political spectrum.

Earlier this year the Soros-backed ThinkProgress attacked a S.C. bill that tried to nullify Obamacare and currently the Soros-backed group Evangelical Immigration Table is running pro-amnesty ads in the most conservative counties to gain support among evangelical voters.

Soros’ influence is real in South Carolina and voters are fighting back.