University Of Georgia Teaching Assistant Irami Osei-Frimpong: "White People May Have To Die For Blacks To Be Made Whole"

Irami Osei-Frimpong, a graduate student, teaching assistant, and a Ph.D. candidate in philosophy at the University of Georgia, apparently didn’t go far enough with his racism and violent threats over the years on a variety of platforms, including Twitter, Facebook and YouTube.  At least not enough for them to do anything to him like they have conservative voices in America, which have done nothing of the kind.  However, it looks like one Facebook post did get him in trouble when he claimed that “Some White people may have to die for Black communities to be made whole in this struggle to advance to freedom.”

Interesting, isn’t it?  And you’ll love the university’s non-response to his statement in a moment.

Campus Reform reported on Osei-Frimpong back in January:

UGA philosophy TA Irami Osei-Frimpong made the comment during a conversation on the Overheard at UGA Facebook page. The comment has since been deleted. Osei-Frimpong claimed in May 2017 that Facebook suspended him for quoting from an article which detailed how Texas A&M professor Tommy Curry had said “in order to be equal, in order to be liberated, some white people may have to die.” 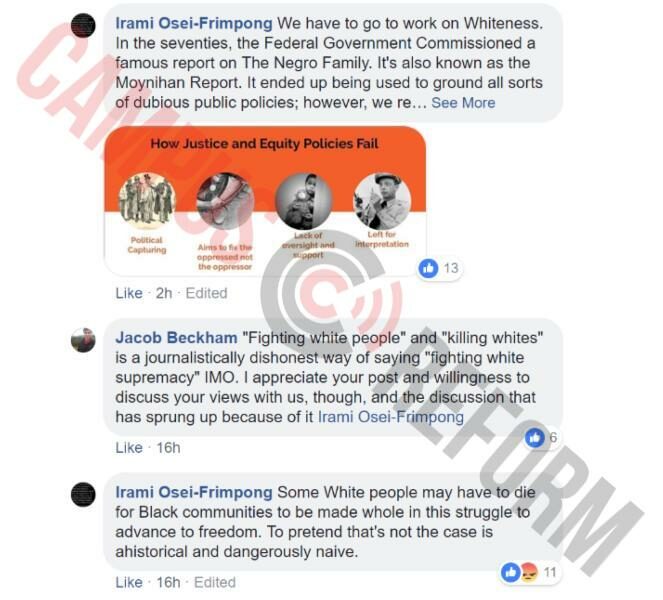 Osei-Frimpong’s Wednesday comment, seemingly inspired by Curry, is far from the first racially-charged remark made by the scholar.

“Fighting white people is a skill,” the UGA TA tweeted on Jan. 12, adding that it is why he supports integrated schools. “You have to get used to fighting White people. It takes practice.”

He then quoted American clinical psychologist Bobby Wright, saying, “Blacks kill Blacks because they have never been trained to kill Whites.” 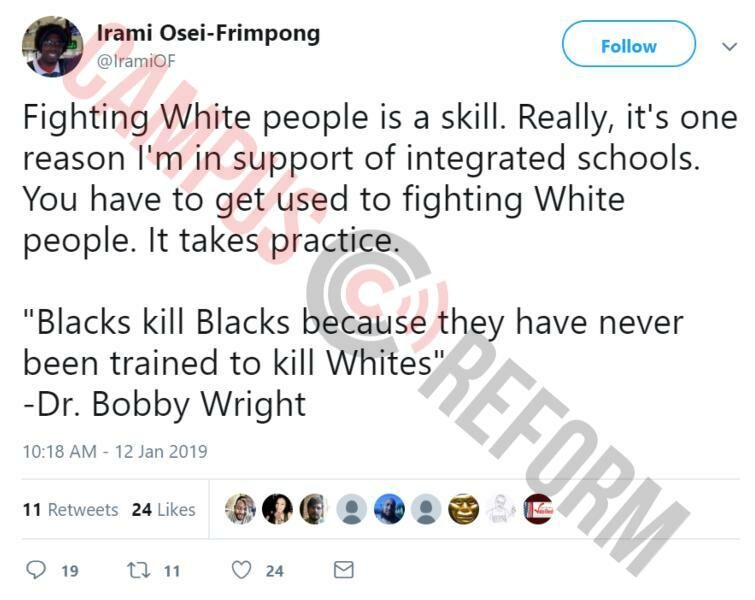 UGA was no better in their response to the statements.

Well, wait a minute, if “racism has no place on our campus” and you “condemn the advocacy or suggestion of violence in any form,” what is there to seek guidance about?  Shouldn’t this guy have been terminated and turned over to the authorities?  One would think so.

What’s even sadder is that some of his UGA colleagues have actually defended his comments by claiming that they were not threats or 0penly hateful, but rather “hurt your feelings speech.”

That’s not all.  Dr. Eowyn points out:

University administrators at first dismissed student complaints about Osei-Frimpong’s statements, claiming they were made “in his capacity as a private citizen on his personal social media accounts. At this point, we are unaware of any allegation of racially hostile or discriminatory conduct in the course of his professional duties or any statements falling outside of First Amendment protections.”

The university only altered its position that Osei-Frimpong’s Facebook comment was First Amendment-protected free speech after numerous online reports of his comment — including coverage by the university’s conservative student paper, Arch Conservative — and threats by large donors that they would withhold donating. (College Fix)

But the university continued to drag their feet for months.

Finally, in a public hearing on April 20, 2019, the university found an excuse — that Osei-Frimpong had violated its student code of conduct by lying in his graduate school application in December 2015, for which he may be dismissed from the university:

At a six-hours-long public hearing on April 20, 2019, Osei-Frimpong claimed that the complaint against him is an attempt to “chill” his speech rights. He maintained that he left out his prior studies in political science at the University of Chicago because he was only thinking about schools where he had studied philosophy, and argued that he correctly had answered the question about prior charges or convictions because an Illinois judge had dismissed the charges against him.

To which Cheri Bliss, the university’s director of graduate student services, lamely replied: “It’s a concern you did not list (attending the University of Chicago).”

It’s even more concerning that UGA didn’t dismiss this man and consider him a deadly threat to those who have light skin.

Massive Cyberattack Hits America – Will Russia Take Down The Entire Internet If We Go To War?