Last Friday, the Sunday Express reported that British jihadist Abu Rashash Britani called for the beheading of Prime Minister David Cameron and Home Secretary Theresa May, tweeting, “I think when we establish khilafah (a Muslim state), a battalion of mujahadeen shud head to UK and capture davidcameron & theresamay n behead them both.” On Sunday, a US Muslim Jihadist targeted Barack Obama and his family, calling for their beheading.

Timothy DeTillio tweeted, “Obama your days are numbered. You have nowhere to hide. Your family is first on our list. We will find you and remove your filthy heads!!” 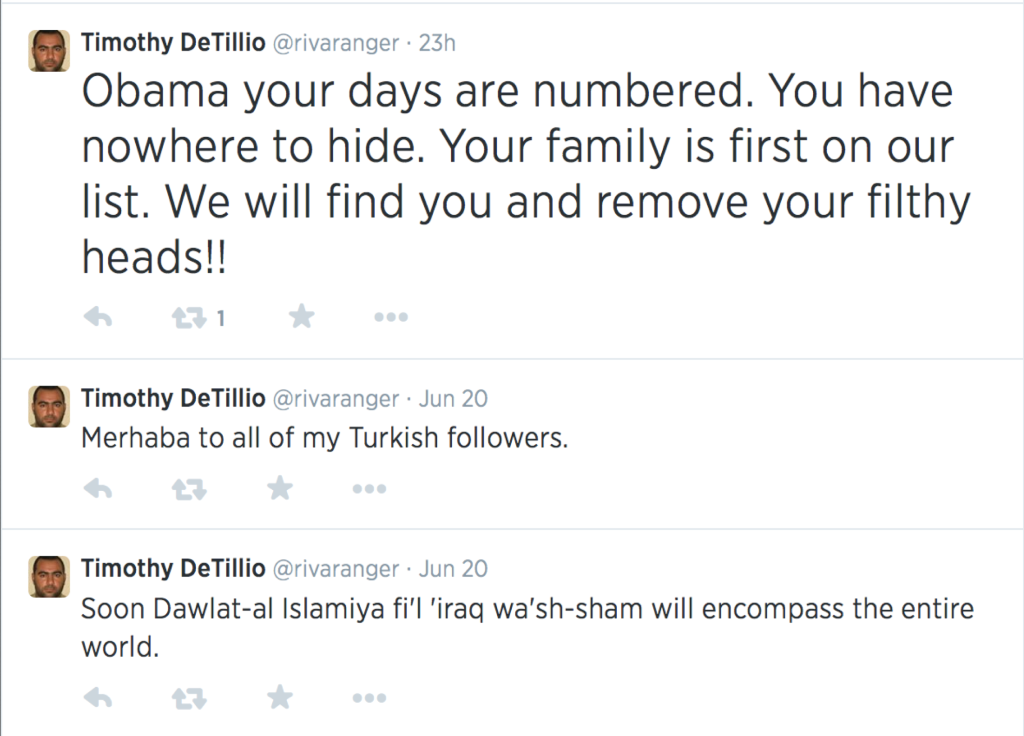 He had previously tweeted out, “Soon Dawlat-al Islamiya fi’l ‘iraq wa’sh-sham will encompass the entire world.”

Keep in mind that in both the Obama administration, as well as the Cameron government, they have deceitfully presented Islam as a “religion of peace,” not wanting to offend anyone, but Islam is having none of it. They want a caliphate. They want the guns, the weapons and the bombs, and now they are more vocal than ever.

According to Robert Spencer at Jihad Watch:

This clown’s Twitter account is still active. Twitter only seems interested in closing the accounts of those who oppose jihad terror. But anyway, here again we see a convert to Islam turn against his nation and people, and cheer on their subjugation. Which mosques in the U.S. are teaching against the idea that Islamic law should encompass the world? Why, none of them. None at all.

However, a quick search of his Twitter handle, at the time of this writing, resulted in a page declaring “Account Suspended.”

DeTillio apparently lives in Vermont and he continued to blast America before his account suspension tweeting, “Dawlah has defeated all comers. Especially those arrogant Ameriki’s.”

“The West and their lackeys need to come to the realization that khilafah is here to stay and bring about law and order,” he added.

According to Islam, dawlah means, “country or state” and khilafah is another form of the word caliphate, which is the Islamic state, headed by Muslims.

The irony in all of this is, as I’ve pointed out before, that Barack Obama’s own DHS advisor Mohamed Elibiary has said the US is an Islamic country with an Islamic compliant Constitution and that the best antidote to terrorism is Islam. The only way he could reference that is if he believes Obama is a Muslim. Now, couple that with how things work in the Middle East. Muslims are not only at war with Christians and Jews and Buddhists, but they are at war with each other. Thus, as our friend and fellow contributor David Woods has pointed out, since Obama is actively involved in overseeing the troops in Muslim lands, he has made himself a target, by those that oppose him.

Personally, though I believe Barack Obama is guilty of treason and should be tried and if found guilty executed, I do not believe such threats as these being made are anything but lawless animals spewing bile, who need to also be tried and then executed if found guilty and eliminated from the world. DeTillio is not after bringing “about law and order.” He’s about establishing the demonic, political, quasi-religious caliphate of Islam; nothing more, nothing less.

I wonder if targeting Mecca and Medina (two of the most holy cities in Islam) with nukes and issuing a demand that if jihad doesn’t immediately stop, we will utterly destroy it would work (h/t Tom Wise). Probably not, but we should seriously give it a try.