California could be even closer to a major natural disaster than ever before.

With eight active volcanoes and a high state population, the United States Geological Survey says that the Golden State is in desperate need of very close monitoring.

“I call them the watch-list volcanoes,” said Margaret Mangan, Scientist-in-Charge at the California Volcano Observatory.

Scientists know from geophysical and geochemical research that these volcanoes have molten rock and magma, “in their roots,”  and the world’s top volcanologists aren’t taking any chances anymore.

They are heading to Portland, Oregon on August 14 for the first international volcanology assembly held in the U.S. since 1989.

The many famous, prominent, and dangerous volcanoes of the West Coast will be the subject of field trips and much discussion during the assembly.

The volcanoes which will get the most discussion are shown in the image below. 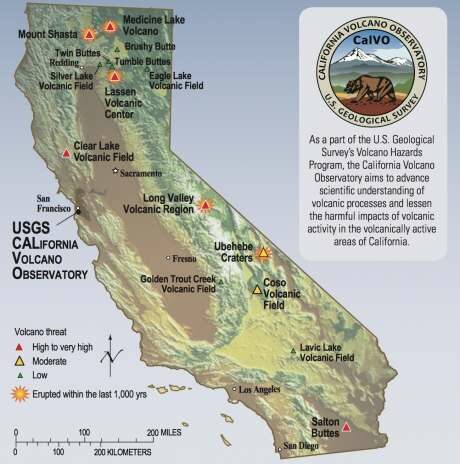 USGS caption: Volcanoes of very high to low threat are scattered throughout California, from the Oregon border (north) to Mexico (south). Other older volcanoes in California are of less concern. California’s volcano watch list is subject to change as new data on past eruptive activity are collected, as volcanic unrest changes, and as populations in threatened areas grow or decline.

Throughout the Cascade Range and into southern California, the West Coast is home to most of the country’s highest-threat volcanoes, as ranked by the United State Geological Survey, making California a ticking time bomb.

As if the earthquake threat on the heavily populated West Coast wasn’t enough, scientists are now concerned about the volcanic activity as well.

While Mount Shasta unsurprisingly tops USGS’s list of very-high threat volcanoes in California, there are seven other volcanic areas in the state that are also “young, nervy, jacked up on magma, and likely to erupt.”

Back in 2005, a national team led by John Ewert, a volcanologist with the USGS Cascades Volcano Observatory, established a system for other volcanologists, which would help them decide which of the United States’ 169 young volcanoes are the most dangerous and most in need of monitoring.

In the “Framework for a National Volcano Early Warning System,” Ewert’s team identified 57 priority volcanoes in the U.S., and eight just in California are now on high alert.

Roughly half of the nation’s 169 young volcanoes are dangerous because of the manner in which they erupt and the communities within their reach.

Volcanologists are going to be monitoring these volcanoes in California closely, and maybe they can give those nearest some kind of warning should major changes signaling an eruption occur.