Senior Airman, Brian Kolfage Jr., the most severely wounded Airman in US history—a triple amputee—was informed recently by the Veterans Administration Debt Management Center that he would be back charged $4825.00. According to the VA, they had been overpaying Airman Kolfage for several years and they want their money back. 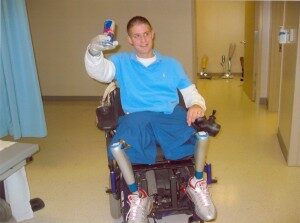 On September 11, 2004, while serving his second deployment in support of Operation Iraqi Freedom, Brian Kolfage lost both his legs and an arm when a 107 mm rocket exploded three feet from the Airman, throwing him into a wall of sandbags. Brian miraculously survived the blast and after eleven months at Walter Reed Medical Center, he returned to serve in the Air Force at Davis Monthan AFB in Tucson, Arizona. Kolfage is no longer on active duty and receives monthly VA benefits compensation for the wounds he received serving our country. 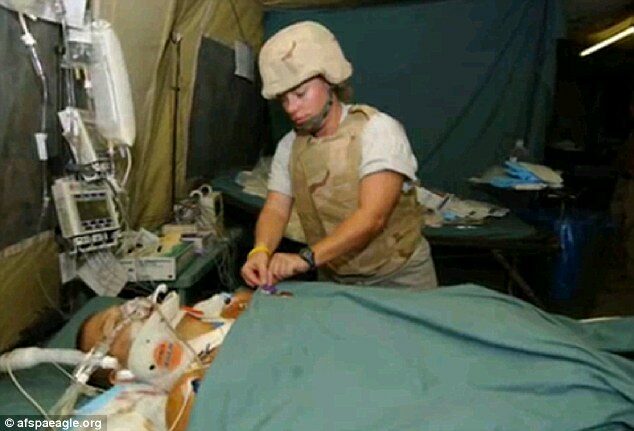 Grave injuries: He was badly wounded in the 2004 attack and had more than a dozen surgeries in the months after

A few months back, Kolfage—who once served on former Congresswoman Gabriel Gifford’s Veterans Advisory Committee and is an outspoken critic of the Obama Administration—received notification dated September 12, 2013 that his file had been pulled and investigated by the VA. After an Arizona background check, the VA claimed that Brian was overpaid, each month, for several years. According to the VA, Brian’s indebtedness—for this alleged overpayment of $4825.00–would require monthly payments of $105 to be taken out of his benefits account until the debt was satisfied.

The VA justification for the back charge stemmed from Arizona court records—the VA claimed—showing Brian was not married and not entitled to the full amount of benefits he had been receiving. 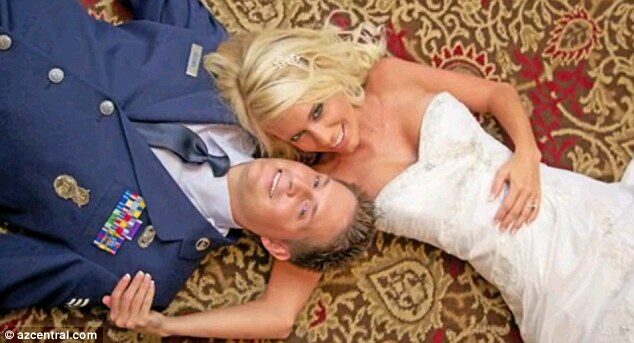 Wedding bells: Kolfage married Ashley Goetz in 2011, saying that it was a ‘dream come true’

Since Brian was in fact remarried, he provided the necessary legal documentation to the VA and was told that an error had been made and the problem would be cleared up and no indebtedness existed. Moreover, the Veterans Administration said there would be no back charge against his benefits. To quote Brian: “They even sent me a document last month [September] saying everything was reviewed, updated and good to go.”

On October 29, 2013, Kolfage received a letter from the Department of Veterans Affairs, Debt Management Center, and Operations Division Chief explaining that his indebtedness balance had been reduced by a $105.00 through a reduction of his monthly benefits.

After several frustrating attempts to contact the VA through the 1-800 number provided in the VA Debt Management Center correspondence, Brian has yet to hear back from anyone about the ongoing reductions in his monthly benefits. After losing an arm and two legs in service to his country, it appears that his government may require Brian to offer his remaining arm to resolve their error.

In my conversations with Brian, one thing is abundantly clear. This man is an unselfish Patriot. Kolfage is not as angry as he is frustrated. His first concerns are for his fellow veterans struggling with an unproductive Veterans Administration, VA backlogs and a system that adds unnecessary stress to the lives of men—he served with—who already struggle with monstrous stresses related to recovery and re-assimilation back into life after combat. They should not have to fight their government for the help the need and are owed.

He is also more concerned about you, then himself. His courage is unimaginable. 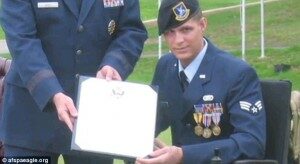 Against all odds: Brian Kolfage lost his right arm and both legs in a 2004 attack (and is seen here receiving an award after the attack) but has started a new life, adapting to his limitations

Given his experience with government-administered healthcare, Airman Brian Kolfage is worried about the long-term effects on each and every one of his fellow Americans who will now be forced to look toward their government for Healthcare. Brian feels, and I paraphrase, that Obamacare much like the Veterans Administration is not capable of handling the healthcare needs of an entire nation. He is worried that Americans will be forced to argue with the Department of Health and Human Services and live with IRS enforced back charges and fines for unconfirmed allegations of misrepresentation similar to what he is dealing with at the VA.

Personally, I cannot help but wonder if Brian Kolfage’s mysterious file re-evaluation and indebtedness determination was another Obama retribution designed to silence yet another critic. Nowhere in any of the correspondence sent to Kolfage has the VA offered an explanation for their decision to do a random background check on a wounded warrior who has been rebuilding his life. Given his service to our nation, Brian’s life must be well documented at the Department of Defense. So why all the concern now?

For me, this man does not owe a damn thing to anyone. He already gave more than enough. We should be kissing his ass every day, not tormenting him with useless letters and requests for follow up. This is a disgrace. Of all people, why Brian Kolfage?

I would think that the government could find a considerable amount of money to handle any alleged overpayments to our veterans through an audit of President Obama’s vacation travel expenses or the operations at his sanctimonious 501 © (3) tax exempt social welfare group, “Organizing for Action.”

All of this for one hundred and five dollars. Someone needs to be fired.

Note: The VA national benefits case backlog exceeds 750,000. In my state Texas, many veterans wait 365 days for a case determination. In some states, the wait can be as long as 500 days.

UPDATE: Many who have read Brian’s story have emailed us asking how you can help Brian financially. Brian has told us he is grateful for the sentiment, but is pretty much taken care of. However, Brian fears there are other veterans who are not as privileged as him financially that this is happening to, and so he wants to get the word out that if this happens to those who are not taken care of as he is, that something like this could be devastating to them.