Veterans descended upon Washington DC this morning to visit the open air WWII memorial and the Iwo Jima memorial. Thousands of individuals were on hand to support these veterans to visit the memorial in spite of Park Rangers attempting to thwart visitors the day prior. Ordinary citizens picked up barricades around the WWII memorial and piled them in stacks on the grassy areas of the park.

In order to insure the veterans were able to attend the rally, bobtail truckers and 4 wheel vehicles participating in the Trucker Ride for the Constitution drove through Washington DC to the WWII memorial in support. Trucks appeared blowing their horns among the crowds of individuals cheering in support. Yesterday, Truckers Ride for the Constitution changed their hashtag to #T4VETS to run today in support of the veterans march to Washington DC today. 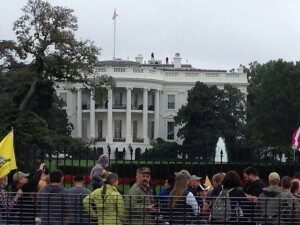 Another part of the convoy, led by General Earnest Lee, drove around the beltway with approximately 10 miles deep of supporters then headed into DC along I-395. Lee’s convoy drove right into downtown DC going about 10 mph and literally shutdown the access into DC. While Lee broke off to go to another choke point, other truckers stayed behind slowing to halt traffic in order to make sure veterans and supporters captured the heart of the DC in peaceful deviance of the Obama administration’s cruel attempt to deny access to the open air war memorials. The General reported several police cars had lined up in a barricade of the street but did allow single file traffic of the truckers to proceed through. As General Lee and other truckers complied with law enforcement, several officers saluted these road warriors in support of their efforts to return America to its Constitutional roots. 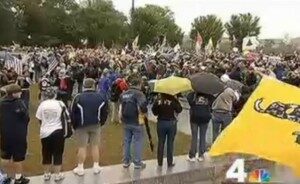 The lamestream enemedia reported on outbreaks of salmonella, Iranian nukes with Michael Bolton and Food Network items while the historic descent of patriotic Americans descended upon Washington and the White House. However, 21st Century Wire has reported up to date information of the event as they have happened throughout the weekend. Here at Freedom Outpost, I have tried to keep up with events and report those to keep you informed and bring you the links to follow this event via live broadcast and links to the Facebook pages for social interaction.

More people continued to descend on the White House gates in protest of the Obama administration. According to the boots on the ground reporter, Will Gonzalez, several individuals tried to start a problem at the WWII memorial, but American patriots stood in front of these individuals shutting down their dissidence. A caller from Georgia was making his way to the group protesting at the White House, but was unable to find his way. GMN assisted this individual to find his way through downtown so he could lend his voice to the momentous occasion. Police officials have also been calm and basically neutral without any riot gear whatsoever but were stationed around the White House.

Patriotic Americans also reclaimed the Lincoln Memorial as one woman urged all Americans, “to do something now.” 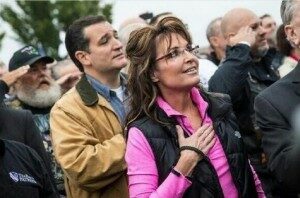 In an interesting development, former Alaska governor Sarah Palin, Senator Ted Cruz and Senator Mike Lee helped protestors at the Lincoln Memorial remove barricades to allow visitors access to the national monument. Protestors then carried barricades from the Lincoln Memorial and the WWII memorial to the White House and placed those barricades in front of the gates. Police appeared in riot gear with face masks to confront the crowd to obstruct their view. Only 5 officers were in riot gear but did stand in front of the barricades blocking the crowd. Patriotic individuals coerced police officials back into the streets. According to Will Gonzalez, the group is within 10 feet of the gates to the White House.

Police officers then used the barricades to push people back from the White House gates becoming a bit more aggressive. Will reported the “blue helmets” were using the most force to repel the group and 10 police on horseback appeared, but were not being forceful.

The Blaze posted a story on the events of the veteran’s march today complete with photos.

The trucker road warriors have broken for a brief rest and food. These courageous individuals will be back out on the road for round 2 today in what General Lee has said will be a surprise for everyone.

Stay tuned to Guerilla Media Network’s live broadcast and other alternate alternative media for the latest developments. A big thank you to Mary who has posted photos and video in the comments section of Freedom Outpost articles.

Stay strong America! We can gather together to overcome tyranny and despotism by this administration.

UPDATE: More Pics from the Veterans March on DC

Attacks on Christians in America Grow as Islam Gets Special Protection