While RNC Chair Calls For Americans To Adopt Spirit of Ramadan, Democrat House Invites AntiChrist Imam To Give Invocation

If you can’t tell that both sides are pushing Islam on the American people, this really should give you a clue.  This past Sunday, Republican National Committee (RNC)  Chairwoman Ronna McDaniel called all Americans to adopt the “same spirit of charity and prayer that defines” Islamic Ramadan.  Right in line with that comes the Democrat-controlled House of Representatives tempting God’s justice by inviting an Islamic imam in to give the invocation.

Islam’s holy month of Ramadan began Sunday, so it’s not surprising that the U.S. House turned to a Muslim cleric to provide Thursday’s invocation.

The problem is with the cleric chosen. Omar Suleiman is a conservative imam who has a history of spewing hatred toward Israel and who holds views about gays and women that would spark outrage on the left if they came from a preacher of any other faith.

Suleiman is the founder and president of the Irving, Texas-based Yaqeen Institute for Islamic Research. U.S. Rep. Eddie Bernice Johnson, D-Texas, invited him to give Thursday’s invocation, a Yaqeen Institute statement said.

Suleiman’s honor of giving the invocation was touted by Zahra Billoo, a California chapter director for the Council on American-Islamic Relations (CAIR) and among the most rabid Israel haters among CAIR’s stable of Israel haters. 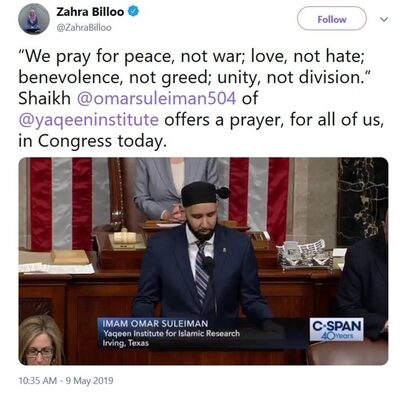 “We pray for peace, not war,” he said. “Love not hate. Benevolence, not greed. Unity, not division. And we commit ourselves to not betraying our prayers with actions that contradict them. Let us be for truth, no matter who, or for is against it.”

Emerson goes on to point out the fact that Suleiman wants anything but the things he is “praying” for.

There is evidence dating back years to prove the practice takes place. And a Hamas official openly admitted the practice more than a month before Suleiman’s post. “The fact that people are willing to sacrifice themselves against Israeli warplanes in order to protect their homes, I believe this strategy is proving itself,” said Hamas spokesman Sami Abu Zuhri.

He’s also a supporter of the Palestinian Liberation Organization, which has as its charter the complete annihilation of the state of Israel.  Does that sound like wanting love, benevolence and unity?  Certainly not.

And Suleiman goes on in full support of Sharia law against Biblical law.

This all on the heels of not the Democrat National Committee but the RNC’s chair wishing that Americans would take on the spirit of Islam and their degenerate Ramadan, which is now infamous for its jihad attacks during this month called Ramadan-bomb-a-thon.

We wish everyone observing #Ramadan a blessed period of prayer, reflection & spiritual discipline.

We are inspired by our friends in the Muslim-American community as they begin this time of fasting & contemplation.

May all Americans adopt the same spirit of charity & prayer.

Isn’t it interesting that the very ideology that we were told was behind the 9-11 attacks has now become the most protected ideology against criticism in America, now?

I’ll give you a hint as to why that is:  it’s God’s judgment (Deuteronomy 28; Leviticus 26).  Unless we, as the people of God, repent, we can expect more judgment to be brought on our country more and more, and we won’t be made great, but rather destroyed.

Assange Dumps All Wikileaks Files As Stated During Arrest – Here They Are!

Assange Dumps All Wikileaks Files As Stated During Arrest - Here They Are!