White House Aide Kellyanne Conway: "If I Were Shot and Killed" Twitter Would "Explode in Applause and Excitement"

Former Trump Campaign manager and White House aide Kellyanne Conway commented on this week’s shooting of House Majority Whip Steve Scalise (R-LA) and the deplorable way people have responded to it on social media.  “If I were shot and killed tomorrow, half of Twitter would explode in applause and excitement,” she said.

That shooting critically injured Scalise, who is currently recovering at a Washington, DC hospital.

As we reported following the shooting at a Republicans practice for a congressional charity baseball game earlier this week, the downright nasty and hate filled response of people was been disturbing.

This was just a sample of a few of the comments celebrating the shooting over at Huffington Post. 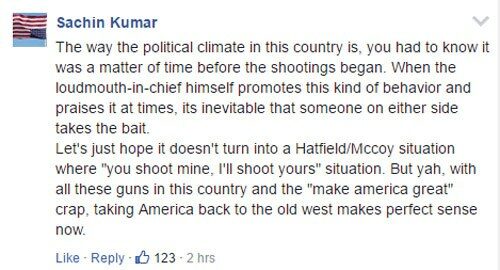 Conway told Fox & Friends, “I really would ask people to think about the hateful rhetoric. This man, this shooter the other day, didn’t hate baseball, He hated Republicans, and his social media feed was a complete anti-Trump, anti-Republican screed. For those particularly in the media who are so obsessed with the president’s social media postings, why isn’t everybody looking inside a little bit at what they’re posting and what they’re saying? Nobody is responsible for this shooting except the shooter. There is no question about that. But at the same time you can oppose policies, but with some such hateful charged rhetoric that active resistance becomes armed resistance in the case of this lone gunman.”

“Look at Twitter,” she added.  “If I were shot and killed tomorrow, half of Twitter would explode in applause and excitement. This is the world we live in right now. It’s terrible. Again it is one thing for people to say I disagree with you on the health care repeal, on taxes or national security plans, but you can’t attack people personally in a way and think that tragedies like this won’t happen.”

“This is also the natural by-product you have after images of the president being shot in rapper’s video, or being assassinated in a production there in New York City, or a picture of a severed head. All of that is a toxic stew. Again there is no one to blame but the shooter here, but the calls for tamping down, there should also be some introspection there.”

One thing is for sure, the Bernie Sanders supporter who did the shooting and then met his end, was encouraged to do so in many ways by what the mainstream media is putting out.

Democrats have already taken the opportunity to advance “the gun did it” mantra to push for more gun laws in violation of the Second Amendment.

However, there was a positive response from a group of veterans who held a solidarity run in Alexandria following the shooting and President Donald Trump said of Scalise, “He’s a patriot and he’s a fighter. He will recover from this assault.”

Following the shooting, Trump tweeted, “Rep. Steve Scalise of Louisiana, a true friend and patriot, was badly injured but will fully recover. Our thoughts and prayers are with him.”

Rep. Steve Scalise of Louisiana, a true friend and patriot, was badly injured but will fully recover. Our thoughts and prayers are with him.

Was The Gotthard Base Tunnel Opening Ceremony An Illuminati Ritual Intended To Honor Satan?

Was The Gotthard Base Tunnel Opening Ceremony An Illuminati Ritual Intended To Honor Satan?