After ignoring the global jihad for the whole of his presidency, his silence amounted to nothing short of support. And that support let to empowerment and jihad success in the Middle East, Africa, Europe and North America.

Now that the Jihad is raging, thanks in large part to his islamophiliac foreign policy, Obama’s solution to the bloodshed and the carnage is — don’t report it. If a tree falls in the woods and the media doesn’t cover it, then it doesn’t make a sound. Obama was elected President, but he behaves like a tinpot dictator.

This is, by the way, exactly what Islamic supremacists have been demanding for years. That media stop reporting on jihad. The media have, in large part, complied. But when Sydney, Paris, Ottawa happen — it cannot be denied.

I expect Obama to come after counter-jihad sites as well, because truth-seeking freedom lovers increasingly are going to the net for their news.

President Barack Obama has a moral responsibility to push back on the nation’s journalism community when it is planning to publish anti-jihadi articles that might cause a jihadi attack against the nation’s defenses forces, the White House’s press secretary said Jan. 12.

“The president … will not now be shy about expressing a view or taking the steps that are necessary to try to advocate for the safety and security of our men and women in uniform” whenever journalists’ work may provoke jihadist attacks, spokesman Josh Earnest told reporters at the White House’s daily briefing.

The unprecedented reversal of Americans’ civil-military relations, and of the president’s duty to protect the First Amendment, was pushed by Earnest as he tried to excuse the administration’s opposition in 2012 to the publication of anti-jihadi cartoons by the French satirical magazine Charlie Hebdo.

The White House voiced its objections in 2012 after the magazine’s office were burned by jihadis, followings its publication of anti-jihadi cartoons.

Earnest’s defense of the 2012 objections came just five days after the magazine’s office was attacked by additional jihadis. Eight journalists, two policeman and a visitor were murdered by two French-born Muslims who objected to the magazine’s criticism of Islam’s final prophet.

Editor’s Note: In addition to pointing out what the White House is set to do, in violation of free speech, Geller’s organization is bringing the fight to the Islamists in Garland, Texas in the form of a free speech rally outside and Islamic event. Here’s the information:

Islamic supremacists and terror-tied imams from across America will gather in Texas this weekend to hold the annual Stand With the Prophet in Honor and Respect conference, a weekend forum that is being billed as a “movement to defend Prophet Muhammad, his person, and his message,” according to event information.

The Stand With the Prophet in Honor and Respect conference declares that it is trying to start a “movement to defend Prophet Muhammad, his person, and his message.” This theme is strikingly similar to the motive of the Charlie Hebdo jihad killers: after they had murdered twelve people in the Charlie Hebdo offices, one of the gunmen shouted, “We have avenged the Prophet Muhammad.”

This kind of hate-filled rhetoric fuels the violence and murder of freedom loving people.

We will protest this supremacism and stand in defense of free speech. Je suis Charlie! 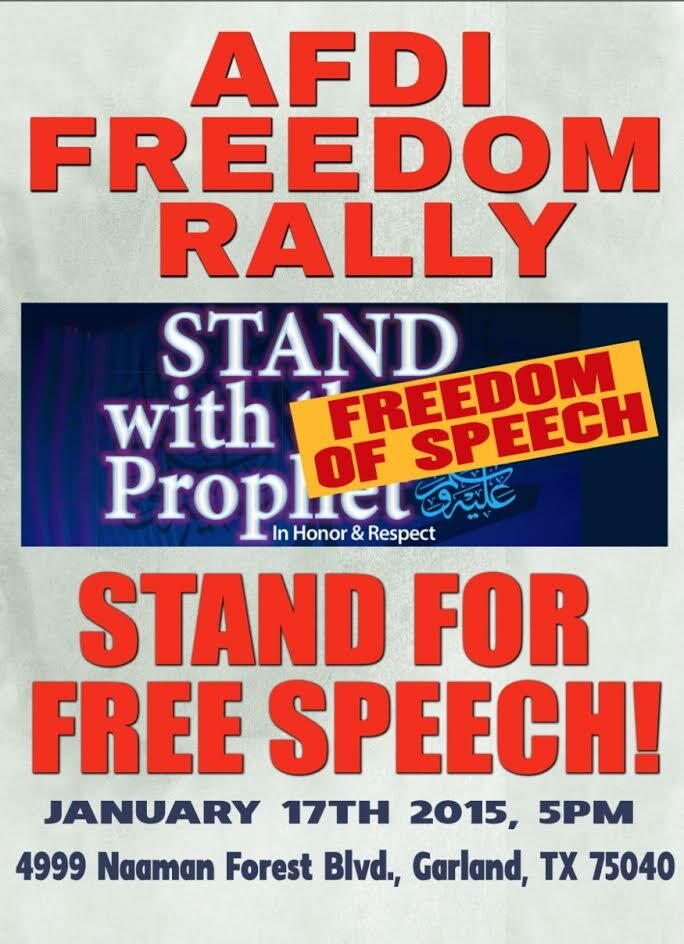 NEW YORK, January 13: The human rights advocacy group the American Freedom Defense Initiative (AFDI) today announced that it will be holding a demonstration in defense of the freedom of speech on Saturday, January 17 in Garland, Texas, outside a conference on “Islamophobia” that seeks to stifle opposition to jihad terror and restrict the freedom of speech, working to further the same Islamic law that led to the Charlie Hebdo jihad massacre.

The Stand With the Prophet in Honor and Respect conference declares that it is trying to start a “movement to defend Prophet Muhammad, his person, and his message.” This theme is strikingly similar to the motive of the Charlie Hebdo jihad killers: after they had murdered twelve people in the Charlie Hebdo offices, one of the gunmen shouted, “We have avenged the Prophet Muhammad.”

The Stand With the Prophet event will feature John Esposito, a professor at Georgetown University and head of the Saudi-funded Alwaleed bin Talal Center for Muslim-Christian Understanding at Georgetown; and Siraj Wahhaj, an unindicted co-conspirator in the 1993 World Trade Center bombing and close friend of the mastermind of that bombing, the “Blind Sheikh” Omar Abdel Rahman. Wahhaj has said: “said in 1992, “If only Muslims were clever politically, they could take over the United States and replace its constitutional government with a caliphate.”

AFDI President Pamela Geller said in a statement: “Saturday’s Stand With the Prophet event seeks to combat ‘Islamophobes in America’ – in line with Islamic supremacist groups’ longstanding objective of defaming, smearing and marginalizing anyone who opposes the jihad agenda. They say they want to defend Muhammad – which means to silence those who notice that defenders of Muhammad just murdered sixteen people in Paris, and tens of thousands worldwide since 9/11.”

“Our AFDI rally,” Geller added, “will stand for the freedom of speech against all attempts, violent and stealthy, to impose Islamic blasphemy laws on Americans and stifle criticism of Muhammad and Islam. As Muhammad’s followers kill more and more people, we need critics of him more than ever – and free people need to stand up against these underhanded attempts to stifle all criticism of Islam, including honest investigations of how jihadists use Islamic texts and teachings to justify Jew-hatred, violence, supremacism and oppression.”

Noted Geller: “The United States and other Western nations have paid insufficient attention to the fact that Muslim communities in the West have not made any concerted effort to expel supporters of jihad terror from their midst, and have done nothing at all to teach against the jihadist understanding of Islam, even though they ostensibly reject it. That shows the hypocrisy of this Stand With the Prophet event.

Consumer Reports: “Stay Away From Healthcare.gov”

Guess How Many Nations In The World Do Not Have A Central Bank?

Guess How Many Nations In The World Do Not Have A Central Bank?