Home » White House: Stimulus ‘Widely Recognized To Have Broken The Back Of The Recession’

White House Press Secretary must be going through a couple of bottle of Scotch a day in order to maintain any demeanor of holding things together because his rhetoric is as reprehensible as Barack Obama’s.

“The entire purpose of the Recovery Act was to grow the American economy and grow American jobs here at home, and that’s what it did. It’s widely recognized to have broken the back of the recession,” he said at Thursday’s briefing.

The question that I have is, “Widely recognized by who?” The only people I can come up with are Democrats in the House and Senate and Obama’s buddies who claims such nonsense. 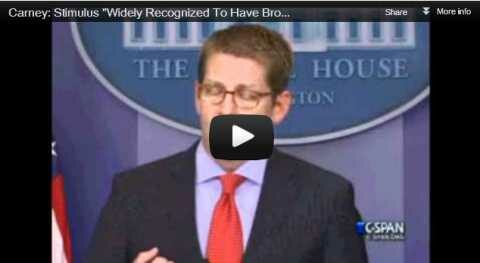 Barack Obama explicitly claimed that if he got the stimulus money, which was in excess of $800 billion of tax payer money, that the unemployment rate would go down. So what are the results that the people got from Barack Obama throwing away nearly a trillion dollars of the people’s money? We still have unemployment above eight percent.

Not only that but the numbers indicate that we are heading towards a deeper recession and all we have gotten from Obama is excuses.

No one with any common sense, which I’m afraid should be changed to “uncommon sense”, would think that Carney is telling them the truth.

In an article I wrote back in April I drew a parallel between Barack Obama and Ronald Reagan. I know, I know, there is no comparison. However, there were similarities in what was taking place right before they took office. Jimmy Carter had taken the nation down the road that Obama has taken us down and the country was in a economic mess. While we were facing the same thing at the end of the Bush era, Obama decided that instead of dealing with the recession as Reagan did, he would throw money at it. Yeah that’s it. We’re in debt and the way to get out of the debt is to spend more money on it.

He failed to cut anything and still, to this day, has not operated under a budget. Reagan however, did cut taxes and it began an economic boom like this country has never seen.

So how can we determine what worked best? Just look at the following numbers from both mens’ terms in office.

Just look at a comparable difference between the Reagan numbers in 1983-84 and the Obama numbers of 2011-12. They speak for themselves.

These numbers reflect 3 years into their first terms. Ronald Reagan inherited a far worse economic crisis than Barack Obama did. Reagan chose to push for American exceptionalism and letting people keep more of their money, while Barack Obama said that America had been bad boys and girls and needed to change to learn to play well with others.

Even the jobs shown here are largely misunderstood because many of them were only temporary jobs, part-time jobs or they are no longer in existence because many of the companies that received stimulus money either are bankrupt or outsourced much of their work to foreign countries.

In the end, backs were broken. Only it was the backs of the American people, not the recession.