Will The Bullies At GLAAD Pressure A&E To Take "Duck Dynasty" Off The Air?

Phil Robertson, the patriarch of the Robertson family, portrayed on A&E’s Duck Dynasty, just shocked the world with Biblical truth. He called out homosexuality for what it is: sin. Robertson is not a man who minces words. Enter the professional “anti-gay” cops of the Gay and Lesbian Alliance Against Defamation (GLAAD) to start pressuring A&E into dropping Duck Dynasty from its lineup. Why? It’s because it’s fine for the fiends at GLAAD to say whatever they want about Christians, but a Christian cannot speak the truth without serious repercussions. Robertson did not single out homosexuals exclusively for their sin. He alluded to a multitude of sins that come from a culture that rejects the law of God. Will GLAAD and other militant homosexual activists succeed in getting Duck Dynasty off the air? In this culture, where the homosexual agenda is akin to mob rule, the answer is probably “yes.” 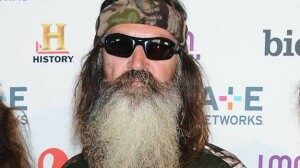 The entertainment industry does not have the gumption to stand up to the homosexual bully pulpit. GLAAD and other militant homosexual activists have the market cornered, always jumping from one fake “outrage” to another whenever there is a perceived “anti-homosexual” statement made. The targets of these attacks are almost always Christians. Duck Dynasty is a highly successful show, with over 11 million viewers tuning in to watch the Christian, fun-loving Robertson family. The show is clean and highly entertaining. To their credit, the Robertson family has never hid their Christian faith behind a secular facade.

In an interview with GQ Magazine, Phil Robertson made some “shocking” statements that sent shivers down the twitchy spines of GLAAD activists. Free speech is not a Christian right when it comes to telling the truth about homosexuality. To the world, talking about sin in general is a controversial subject.

“It seems like, to me, a vagina—as a man—would be more desirable than a man’s anus,” Robertson says in the January issue of the men’s magazine. “That’s just me. I’m just thinking: There’s more there! She’s got more to offer. I mean, come on, dudes! You know what I’m saying? But hey, sin: It’s not logical, my man. It’s just not logical.”

“Start with homosexual behavior and just morph out from there. Bestiality, sleeping around with this woman and that woman and that woman and those men.” Robertson then went on to paraphrase a verse from Corinthians: “Don’t be deceived. Neither the adulterers, the idolaters, the male prostitutes, the homosexual offenders, the greedy, the drunkards, the slanderers, the swindlers – they won’t inherit the kingdom of God. Don’t deceive yourself. It’s not right.”

As always, GLAAD jumps in when this has nothing to do with them. Feigned outrage is their specialty. It’s interesting that Robertson’s comments has GLAAD out for blood, but when die-hard liberal Alec Baldwin was “gay bashing,” the organization was silent. Though fired from MSNBC, GLAAD was ultimately lenient with Baldwin. But the Robertson’s are conservative Christians, so they will not get a pass. The Duck Dynasty family will get the wrath of GLAAD.

What did Phil Robertson say that wasn’t true? He called out sinful behavior. However, even if he had singled out homosexuality, he has a right to freedom of speech. Sadly, Christians are losing the fight against militant homosexuals in this arena. At least Robertson has a backbone and never caves on his beliefs. GLAAD is just looking for a fight, and a reason to take down a successful Christian program. This is their aim.

Robertson released his own statement in response:“I myself am a product of the ’60s; I centered my life around sex, drugs and rock and roll until I hit rock bottom and accepted Jesus as my Savior. My mission today is to go forth and tell people about why I follow Christ and also what the Bible teaches, and part of that teaching is that women and men are meant to be together. However, I would never treat anyone with disrespect just because they are different from me. We are all created by the Almighty and like Him, I love all of humanity. We would all be better off if we loved God and loved each other.”

Phil Robertson, like every Christian before him, was rescued by Jesus Christ from a life of sin. He’s been there. He knows what he’s talking about. In this world that rejects the gospel with a vengeance, these are fighting words. Organizations like GLAAD fight dirty. Today, the homosexual agenda is militarized, so any perceived threat like Robertson’s honest, truthful comments is a declaration of war. A&E will face an onslaught of lobbying pressure from GLAAD to remove Duck Dynasty from its lineup. Will it work? GLAAD issued a statement in regards to the matter.

“Phil and his family claim to be Christian, but Phil’s lies about an entire community fly in the face of what true Christians believe,” said GLAAD spokesperson Wilson Cruz. “He clearly knows nothing about gay people or the majority of Louisianans – and Americans – who support legal recognition for loving and committed gay and lesbian couples. Phil’s decision to push vile and extreme stereotypes is a stain on A&E and his sponsors who now need to reexamine their ties to someone with such public disdain for LGBT people and families.”

Wilson Cruz knows nothing of which he speaks, but there is little doubt that A&E will face enormous pressure from GLAAD and other militant homosexual activists to take Duck Dynasty off the air. This lobby wields an axe over the entertainment industry and their threats carry major weight. It would not be shocking at all if A&E gave in to the pressure. They’ll cave to political correctness and if they don’t, GLAAD will make them pay.

We Don’t Need an Article V Convention to “Clarify” Our Constitution!

We Don’t Need an Article V Convention to “Clarify” Our Constitution!