General Motors' difficulties in obtaining vital components for its units prevent it from delivering some models. 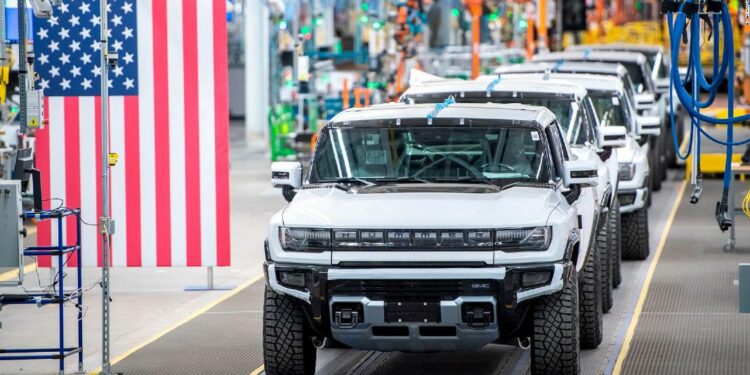 General Motors’ net profits plummeted almost 21 percent in the first six months of 2022, reaching 4.6 billion dollars, mainly due to the company’s difficulties in obtaining the components, such as semiconductors, with which it manufactures automobiles.

GM, in its financial results report, said that close to 90 thousand units are partially manufactured waiting for essential components, which it estimates will come in during the second half of the year.

In a conference call with analysts following the release of the results, company executives confirmed that most of the incomplete units are high-margin SUVs that will be completed in the coming quarters.

The sale of these cars in the second half of 2022 is one of the reasons why CEO Mary Barra assured that General Motors will meet this year’s net profit forecasts.

Barra also said there is some concern about economic conditions, which is why the company is taking cost-cutting measures, including cutting discretionary spending and restricting contracts to critical needs and positions.

Between April and June, gross operating profit reached $2.3 billion, about 42 percent lower than in the second quarter of 2021 and below analysts’ estimates.

At the same time, adjusted gross operating profit in the first six months was $6.3 billion, a 25 percent drop compared to the first half of last year.

While the U.S. company admitted the problems that are causing the supply chain disruptions, GM tried to calm the markets by announcing that they reached several agreements to ensure the uninterrupted flow of components for battery production.

The world’s largest automotive companies are in a race to secure key components to manufacture the millions of batteries that will be needed in the short term to make electric cars.

For example, General Motors announced that it has reached an agreement with the South Korean chemical company LG Chemical, which will provide it with more than 950 thousand tons of components to manufacture batteries throughout this decade. This will be used to manufacture 5 million electric cars.

It also signed two similar agreements with Livent, which will provide lithium hydroxide, essential for producing lithium batteries, and with a consortium of companies formed by Posco Chemicals, Glencore and Controlled Thermal Resources, all giants in the sector.

Livent is a U.S. company that specializes in lithium products. The automaker said it will use lithium mined in South America.

After signing these agreements, Barra assured that GM has what it takes to reach an annual production of one million electric vehicles by 2025.

General Motors’ outlook for 2022 and beyond

The CEO admitted in a letter to shareholders that the company was operating with reduced volumes caused by the lack of semiconductors in 2021 but added that, despite these difficulties, solid results were generated.

In this regard, the company’s turnover during the first six months of this year increased to $71.7 billion, up 7.5 percent, due to the increase in the price of automobiles.

In the second quarter, revenue rose to $35.7 billion, a 4.5 percent increase over the same period last year.

Tesla in trouble for GM

But it’s not all bad news for GM. There are hints that the U.S. auto giant could achieve something unthinkable: overtake Tesla in the electric market.

Fifteen years ago, Elon Musk claimed that Tesla was going to lead an environmentally responsible automotive business with cheap car prices that all families could afford.

He succeeded, but only in part. It is true that he is leading the change in technology, but it is not true that Tesla cars are affordable. On the contrary.

That’s where the company that concerns us now comes in.

That’s right, General Motors seems to have beaten Tesla to the competition in the low-cost family car segment.

While Musk’s company is still trying to lower the selling price of its vehicles, GM says it has everything ready to sell its electric family car for a final value of less than $20,000.

For Musk it would be a dream come true. The downside: the competition did it while he is embroiled in a dispute over the frustrated purchase of Twitter.

“When a person pays what they pay for a Tesla Roadster sports car, in truth, they are also helping to sustain the investment to develop low-cost family cars in the future,” Musk said in the so-called “Tesla Master Plan” in 2006.

However, since that year, he only managed 4 vehicles priced below $98,000 for the Roadster and the cheapest one he was able to manufacture sells for $50,000.

On the contrary, General Motors has already announced that it will offer its Bolt 2023 hatchback for just… $26,700, a price impossible for Tesla to compete with.

On the other hand, the Bolt EUV, larger and better equipped than the basic Bolt, will cost no more than $33,900.

GM also announced that in 2023 it will sell an electric crossover, similar to the CRV of the Japanese Honda and the RAV-4 of the also Japanese Toyota for 30 thousand dollars.

General Motors president Mark Reuss explained this week that making Bolt the cheapest electric car on the market will help boost the brand’s sales and the adoption of e-cars.

And he anticipated something more than interesting: the entry into the U.S. Congress of an initiative called the “Inflation Reduction Act” that talks about extending federal tax credits for cars powered by battery engines.

If the bill is approved by both parties, electric vehicles could further reduce their price, since a 5-passenger Bolt, with a tax credit of 7,400 dollars, could be sold for less than 20,000 dollars.

Musk himself admitted that the selling price of its units are “really shameful”, after acknowledging that the average selling value for June 2022 was $66 thousand dollars per unit.

The Tesla CEO also explained the reasons: the global chip crisis, the rise in general prices in the economy and the closure of its plants in China in the first quarter of 2022.

“I harbor hope, it’s not a promise or anything like that, but I hope that, at some point, we can lower prices,” Musk said on Tesla’s latest earnings call.

Despite selling much more expensively than General Motors, Tesla is still in very good health: in the second three months of 2022 it achieved revenues of $2.31 billion net, with a huge profit margin for the company.

The price of electric cars

Lowering the retail value of electric cars is key to their widespread adoption and, thus, to reducing the large number of vehicles that still run on combustion engines.

It should be remembered that today’s cars are one of the main sources of carbon emissions into the atmosphere.

Although the Bolt sold at less than 30,000 dollars will probably not bring General Motors much profit, the company knows that it is a very good marketing idea.

An environmentally conscious firm is about as good as it gets these days.

Moreover, by gaining market share in the electric car market, it can better position itself for the future, when these cars will be the rule, not the exception.

GM’s goal, like that of many of the other major brands, is to slowly erode Tesla’s market share to prepare for a future that most assure will be electric.

This week GM also announced that it will expand the service called Super Cruise on another 650,000 kilometers of North American highways.

The list will include the classic Route 66, which was the first asphalt road linking the eastern and western United States.

The different variants of Super Cruise systems offer drivers the possibility of leaving the steering wheel behind and not having to be aware of the brakes and accelerator through complex equipment that includes cameras, radar and various sensors inside the car itself.

The entire system is also based on data provided by a GPS.

As a complement, the Super Cruise system has two infrared cameras inside the vehicle that ensures that drivers are aware of what is happening so that it can take control when reaching traffic-light intersections or when entering urban areas.

The system cannot yet be used in a city, turn 180 degrees or exit roads. It also needs drivers to be attentive at all times in case it needs to take the wheel.

While Super Cruise is several years old (it should be remembered that it could be seen for the first time in 2017 in a Cadillac-CT6), it did not cover many roads in the United States.

Today, Super Cruise is installed in different GM models, such as Chevy Silverado, the GMC-Hummer EV and Cadillac-Lyriqs.

By expanding the service to more roads and installing it in more cars, General Motors is betting that the future will inevitably be about driving, at least in the most developed countries.

Mario Maiorana, General Motors’ top engineering manager, said about Super Cruise that the system has “more cars than ever” and that “it is installed on more roads so that more consumers can experience the experience”.

“We are moving forward on what we believe is the path to autonomous driving, a breakthrough that the industry will eventually unlock its full potential. Automated driving technologies are the future,” he said.