Germany’s Volkswagen to overtake Tesla in sales by 2024, according to Bloomberg

According to the news portal, the German company will be able to overtake the mighty Tesla in electric car sales by 2024. 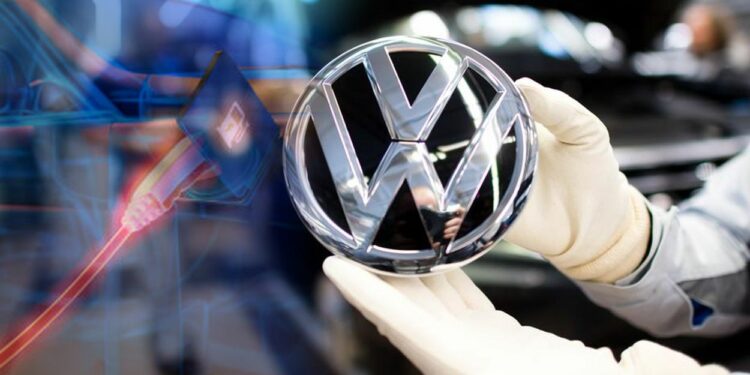 According to a recent Bloomberg Intelligence analysis, the legendary German automaker, Volkswagen, would be close to reaching a historic milestone. As soon as within two years it would surpass in sales of electric vehicles the American powerhouse Tesla of technology tycoon Elon Musk.

The portal considers the German company’s capacity for growth to be greater than that of its rival. In that sense, by the predicted date it would be the world’s largest producer of the demanded ecological cars.

The news does not seem to have gone down well with Musk’s followers, who are confident that the company will continue to reign in the sector. Bloomberg highlights that both companies would produce approximately 2 million vehicles per year by 2024, but with Tesla slightly behind.

Is Volkswagen likely to displace Tesla?

For years now, the German firm Volkswagen has been coupling its infrastructure to enter the electric-powered car market. It is almost certain that the company will become one of the main references in this industry. However, it is to be expected that Musk’s company will want to maintain its supremacy.

Notably, Tesla has plans to have its 4 current manufacturing plants 100% operational within a short period of time. This would leave it with a production close to (but probably not exceeding) 3 million vehicles per year. In third place on this podium would be the powerful Chinese company BYD.

Between the top three of this podium and the rest, the portal states that the distance would be considerable. Thus, these three companies would face each other in an arms race that would lead them to grow in order to monopolize the main markets, which would probably leave the competition in a very bad position.

Tesla occupied 14% of the entire sales market during the year 2021, that is, almost 1 million cars shipped. But Volkswagen has been closing the gap at an accelerated pace and, in the same time period, the German company sold on the order of 11% of the electric vehicle market. The German company’s sales growth more than doubled compared to 2020.

An important aspect that would place the German company at the top of the market is that its plans are to leave the traditional industry. Although it is not the only automaker with such a project, it is probably the one that is working the fastest to achieve it.

“Within 5 years, Volkswagen would plan to inject $7 billion into research and development (R&D) as well as manufacturing in the United States.”

As a result, the company expects, within a decade, to have abandoned all gasoline infrastructure. Fossil fuel-powered cars will be a thing of the past at the company and by 2030 it will be an electric vehicle-only firm like Tesla is today.

To do so, Germany’s Volkswagen needs to secure a position of dominance within the new industry. In other words, abandoning its historic gasoline car business must go through the security of being very much wedded to the new way of business. Within five years, the company plans to inject $7 billion into research and development (R&D) and manufacturing in the United States.

On the other hand, it is worth mentioning that this year the battery engineering laboratory for electric cars started operations in Chattanooga, Tennessee. The European company’s management says it is ready to go big, and the United States is the focus of the battle to take on its direct rival. But Tesla ‘s other main center of strength is China, where the German company also has ambitious plans.

The advantage lies in variety

Although Tesla has built its empire thanks to its direct sales strategies that push dealerships aside, its German rival has strong points as well. One of them is the variety of models it would offer to its potential customers. The cars are expected to be competitively priced to gain ground against its competitors.

Faced with this, Elon Musk’s company will have to work in an accelerated manner on the variety of its offerings. For now, the company is characterized by many unfulfilled promises by its CEO, but pressure from competitors could accelerate its pace. As far as the German company is concerned, it controls 10 different brands, which vary in price and prestige.

The latter range from Volkswagen to Bentley. This reality could make Tesla more vulnerable. However, the decisive battle is in the two main sales markets and whoever dominates them will be the world leader in the sector. These are the Chinese and European markets.

Although the United States is also an important battleground, policies in Europe and China are pushing for a rapid transition. Some countries in the old continent expect to ban trade in fossil-fuel cars in the early 2030s, sending manufacturers into a frenzy. As for China, the authorities expect that by 2025, 25% of car sales will correspond to all-electric cars.

Europe on its side

The German manufacturer has several electric car plants in different parts of Europe. In that market it already exceeds Tesla in production and sales and hopes to consolidate to prevent the American from closing the gap with its new plant in Germany.

In China is where Musk’s company seems to be more consolidated thanks to its close ties with the communist authorities. There, Tesla commands the market from its powerfulGygafactory in Shanghai. Although during the first quarter of the year and part of the second quarter sales were not as expected, this is due to problems beyond the company’s capacity.

Despite the fact that Tesla has a larger number of rivals in China, Germany’s Volkswagen in that country seems to have great momentum. Being far behind in the race does not diminish its merits and its sales comfortably exceeded 3.5% last year in the Asian country, leaving it in a better position than many local state-backed companies. Meanwhile, Tesla encompasses 13% in that nation.

To get an idea of how tight the market is in that overcrowded nation, local company BYD sells 16%. Meanwhile, 55% of sales are taken up by a multitude of small companies in the sector. This makes it clear that competition in this country is one of the most open in the world.

Now, 11% of cars sold in China are electric. But regulators have enormous tax pressure on traditional car sellers. This will soon lead to an accelerated growth in sales of sustainable cars.

Volkswagen’s breakthrough was delayed by a year

Notably, Bloomberg analysts had expected the German firm to overtake Tesla come 2023. But the date was pushed back with the opening of Tesla’ s new plants in Germany and the United States. Thus, the company went from 2 to 4 manufacturing centers, which gave it an advantage in the global market over its closest competitor.

But the 2024 date could be shortened again if Musk’s firm continues to postpone the introduction of the Cybertruck. This electric truck has been delayed multiple times and analysts see it as unlikely to be ready before Germany’s Volkswagentakes the lead in the global market for electric-powered vehicle production and shipments.

At the other extreme, the reason Tesla’ s lead with its Cybertruck is considered “questionable” by Bloomberg is due to other rivals. In the electric pickup truck market, other competitors such as powerhouses Ford and General Motors have plans to launch electric pickups. This could mean that the prestige that these models, such as the F-150, have built up in gasoline versions, will now be inherited by the electric ones.

Instead, the Tesla truck would be seen as just another product and its support would come mainly from the brand’s fan base. Simply put, such a departure from the two industry powerhouses is unlikely to provide the firm of the world’s richest man with certain advantages.

“That’s the segment that is, by retail revenue, the largest for our domestic automakers” expressed Kevin Tynan in Bloomberg. “It’s the territory they’re going to protect more than any other“, he added.

Looking a little further into the future

As already highlighted, Elon Musk has a significant history of unfulfilled promises, both at Tesla and at his other companies. As a result, his future plans are generally questioned by analysts. One of those projects is extremely ambitious and projects to sell 20 million cars per year by 2030.

In the company’s impact report, it also expects to distribute 1,500 GWh of energy by the same date. To get an idea of the magnitude of the company’s expectations, it is noteworthy that in 8 years it should sell 20 times more than last year. At first glance, this may seem a goal far removed from reality.

There is currently no company capable of producing 20 million cars per year. For example, titans such as Japan’s Toyota or Germany’s Volkswagen produce more than 10 million units. However, these are gasoline-powered vehicles and not electric vehicles. Given Tesla ‘s rate of expansion , to meet this target , it would have to create two factories a little larger than the one in Shanghai every year for a period of 8 consecutive years.

While the company’s ability to grow has been blistering, especially since 2017, it is impossible to control critics’ disbelief at such ambitious targets. Tesla’ s annual salessince 2017 grew from a hundred to 936,200 in 2021.

This is an astonishing growth of almost 1000% in a span of just 4 years. To reach 20 million sales, it would require growth equivalent to the above, i.e. 2,000% within 8 years. However, the reality is not as simple as a crude rule of three.