It is believed that the economic effects of the U.S. Congresswoman's controversial trip will not be immediate. 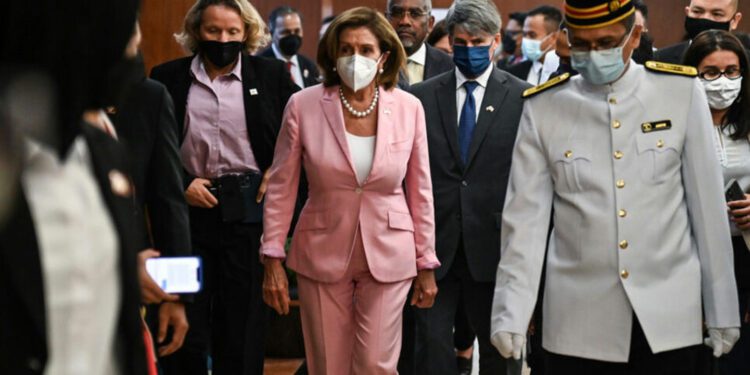 The impact of influential U.S. House Speaker Nancy Pelosi’s trip to Taiwan will be long-term, argue strategists consulted by Bloomberg. The consequences of this new U.S. challenge to China are many and varied.

From an accelerated decoupling of the two economies to the possibility of the Asian giant using its holdings of Treasury bonds against the U.S. For now, investors are doing the math on how Pelosi’s trip to Taiwan will affect global markets

As concerns about what China’s military response would be dissipated, Haven (safe haven) assets wobbled. On the other hand, Treasuries sold off after hawkish comments from Fed officials.

On Tuesday, the yen fell sharply by 1%, after experiencing a significant advance for four days. However, it rose again on Wednesday. Meanwhile, most stocks and stock futures were struggling to hold their ground.

Pelosi’s controversial visit adds a new challenge to international financials. Investors who had been nervous about the strong threat of a global economic slowdown due to rising inflation have a new source of concern.

Closer to crisis in the South China Sea

Already some strategists have warned that it is too early to rule out a response from Beijing, which has threatened military exercises and trade sanctions against Taiwan, the small independent island nation in the South China Sea.

Any hint of a setback in the fragile China-U.S. relationship will have serious implications. “This problem will drag on far longer than the market’s attention span will allow,” said head of Asian financial market research at Rabobank, Michael Every.

“However, geo-strategists are largely united in the view that we are still worryingly close to a potential Fourth Taiwan Strait Crisis,” he argues.

Will China use Treasury bonds?

Since Pelosi’s arrival on the disputed island with China, investors were busy trying to get signals about the Chinese government’s reaction. The discussion during Tuesday and Wednesday revolved around the sudden rise in Treasury yields.

There was a possibility that China could use its nearly $1 trillion of U.S. government bonds to retaliate. Meanwhile, China’s defense stocks saw a rise, but Taiwan’s transportation and tourism stocks retreated.

Since the beginning of the year, volatility generated by geopolitics has been hitting the markets. First it was the Ukraine war and now Pelosi’s visit adds more risks to the pre-war situation seen between China and Taiwan.

“Given the magnitude of the massive sell-off, it was only a matter of time before there was speculation that China was using its significant Treasury holdings in retaliation for Pelosi’s visit,” said BMO Capital Markets strategist Ian Lyngen.

“Should this be the case (which we doubt), the bearishness should be limited as near-term flow influences are overshadowed by the negative impact on the global macro outlook,” he added.

Some analysts say Beijing’s “salami tactics” will soon begin. So believes Nanjing Jing Heng Investment Management Co. fund manager Huang Huiming. That is, a gradualist approach that consists of dividing and then conquering a position. This could again have a strong impact on supply chains.

The analyst sees it this way. “Looking closely at the exercise areas, this is the closest to the island and surrounds it; at first, all military operations are disguised as drills.”

“We might worry if the drills become longer and more intense to affect supply chains, but there is no sign of that happening now,” Huang explained

Will there be a decoupling of the two economies?

It is true that the U.S. and China need each other from a trade standpoint. Either way, and inevitably, Pelosi’s visit to Taiwan will have diplomatic and trade consequences for both nations and for the global economy.

China may move keys and put international trade in a bind, while Taiwan also brings its own to the table. The sovereign island that China wants to annex is a major global supplier of semiconductor chips and dozens of other high-tech products.

The risks of a long-term economic decoupling between the world’s two largest economies are latent. What the two do or fail to do will have a major impact on the performance of the global economy. If supply chains are again impacted, the inflationary situation will tend to worsen.

The Chinese government announced that it will respond with economic sanctions against Taiwan. It will halt exports to the island of natural sand to Taiwan and also imports of fish and fruit.

The fund manager of Edmond de Rothschild Asset Management in Paris, Xiadong Bao, said that “the official return of U.S. influence in Asia-Pacific will inevitably accelerate the decoupling between the U.S. and China.”

He noted that “given that this is an evolving event, investors should prepare for a test of nerves that may involve high market volatility in the short term.”

The bet is on safe-haven assets

The current scenario has only spurred buying of traditional safe haven assets such as the dollar and Treasuries. Despite the uncertainty and the fact that one of the players in this uncertain landscape is the US.

Saxo Capital Markets strategist Jessica Amir believes that the latest tensions between the U.S. and China will not only further fray investors’ nerves, but will end up stimulating higher returns on safer assets. That is bad news for risk assets.

“At this point, we believe the tone has been set for stocks for August and the rest of the year. Geopolitical tensions will increase. We also see a return to safe havens, and the dollar will see increased buying,” Amir predicted.

This view is shared by Shane Oliver, the chief economist at AMP Capital Markets. The strategist believes that Treasuries have a better outlook than gold if Pelosi’s visit triggers a real conflict.

But he warns that “longer term, it signals a further escalation in cold war tensions between the West and China/Russia, which means higher risk premiums.”