Learn about the 5 major advantages offered by this real asset 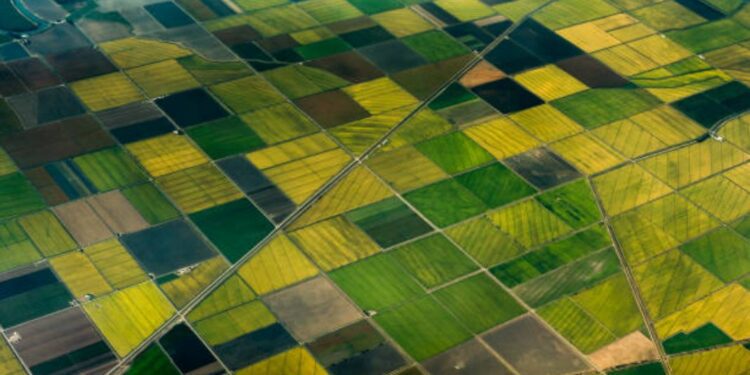 Farmland in the U.S. is becoming one of the preferred assets for the world’s wealthiest individuals.

It is a trend that has been developing for a couple of decades, but has accelerated its course in recent years.

What is behind the acquisition of farmland in the U.S.?

Why are wealthier people turning to investing in this asset?

Read on to learn about the advantages of investing in farmland, who are the largest owners and what the options might be for the retail investor.

Farmland in the U.S.: The Key Facts 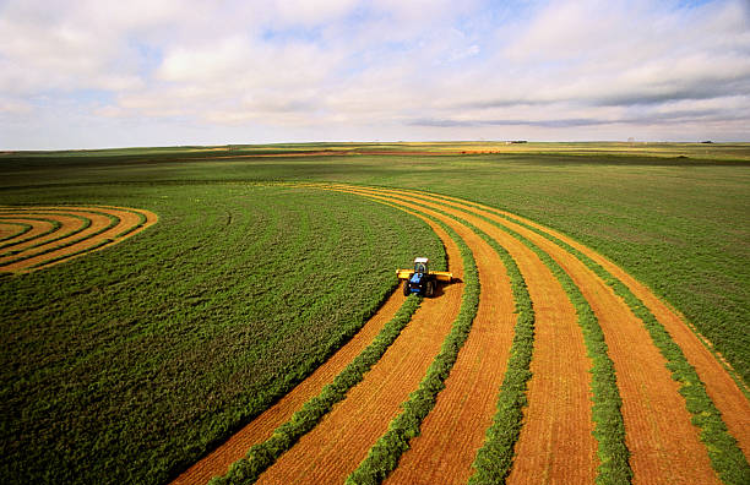 According to the trends revealed in the censuses conducted by the federal government, farmland ownership is divided into 3 groups:

According to Statista by 2021, the number of agricultural farms continued to decline to 2,012,050.

“About 85% of farmland owners in the U.S. are individuals or families, while the remainder is split among corporations, partnerships and other entities.”

In the following image courtesy of Croplands.org we can see the Density of Farmland in North America in 2022:

As we saw in figures and now appreciate in the image in green, we are talking about a continental scale land extension within the US itself, net exporter of food to the rest of the world.

Nature and geography have blessed this country, separated by oceans of distance from old and new conflicts in other latitudes.

This is especially important now that an expansionist Russia, allied with China in other fields, is threatening Eastern Europe.

How much is farmland worth in the USA?

According to the Land Value Statistics 2021 according to the U.S. Department of Agriculture, farm real estate values, which include land and other buildings and facilities owned by farms, have evolved as follows: 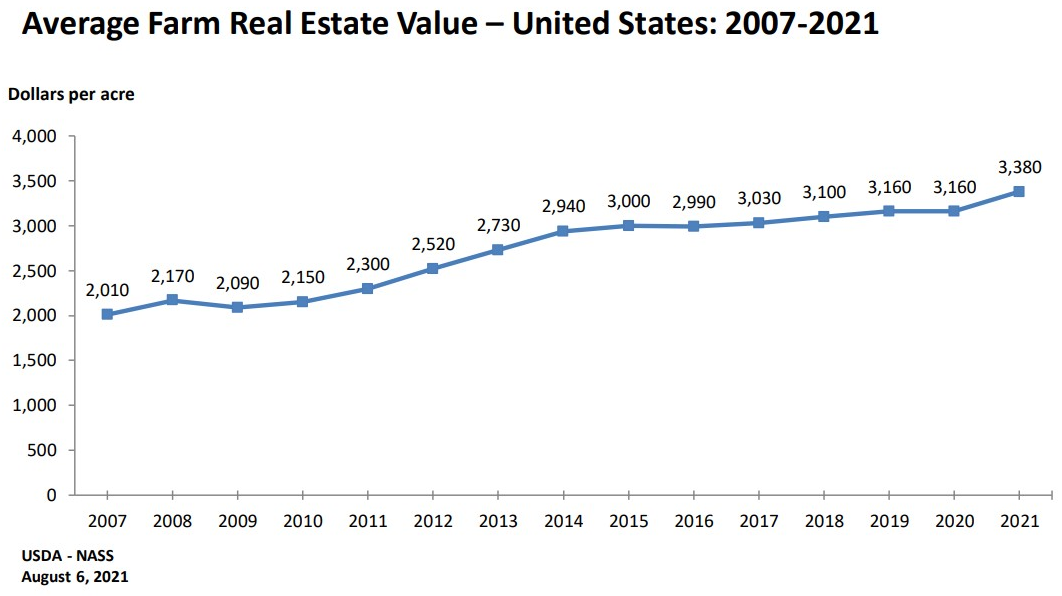 On the other hand, the exclusive value of agricultural land has evolved as follows: 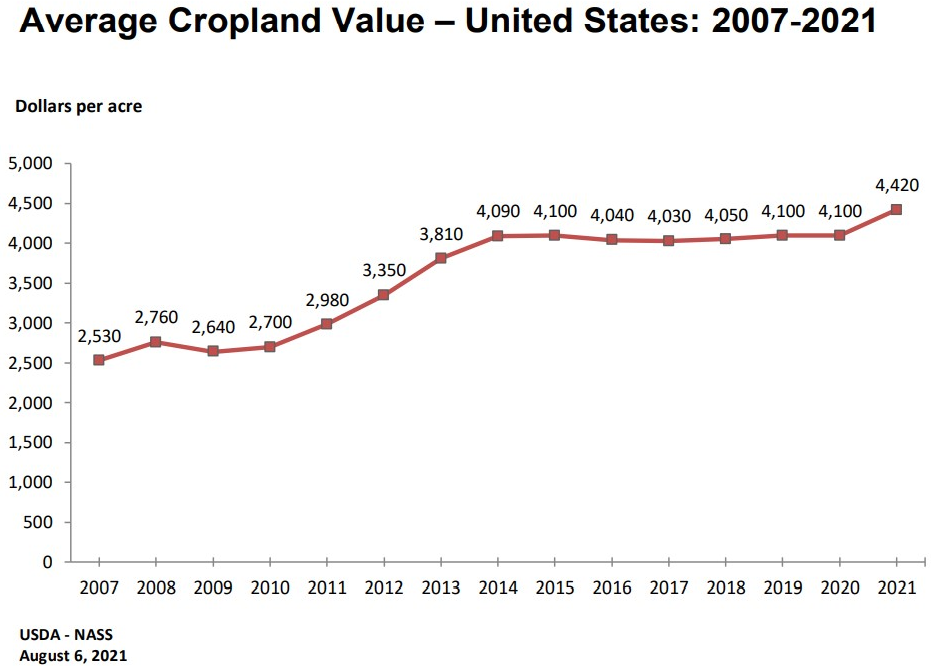 “These returns are tremendously attractive when compared to the stock market.”

The 5 advantages of investing in farmland 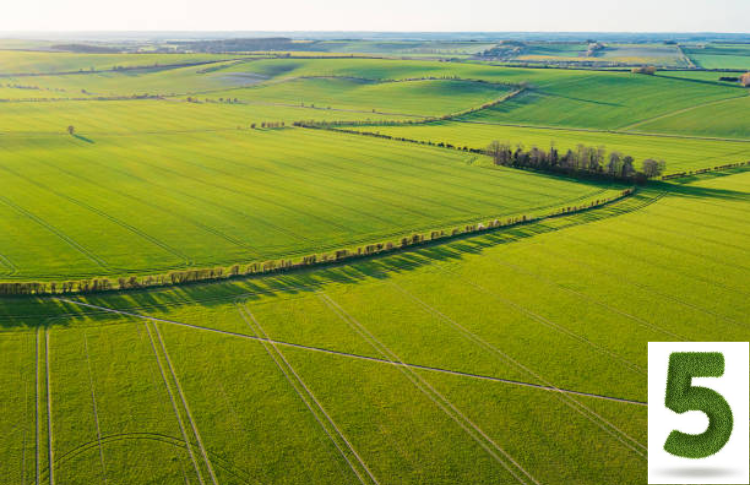 There are 5 main factors that explain why the wealthy are investing in farmland in the US:

Maintaining and growing wealth is one of the primary goals of any investment. Certainly, acquiring farmland can help with this goal through land value appreciation, which has steadily increased over the past few decades.

“This type of real asset is much less risky than investments in the stock market.”

In addition, it allows investors to increase their ability to borrow by using farmland as collateral.

Investing in farmland can generate income through the collection of rents, or through the sale of the crops produced.

Depending on the size of the land owned, this income can be substantial.

“In the case of rental income, returns can be much less volatile than other asset classes, and even less correlated to the stock market.”

There are many ways in which land ownership can be made profitable, with agricultural use being one of the most widespread, although it is not the only one.

3.- The underlying commodity is absolutely essential

“Demand for food commodities will increase along with the world’s population in the coming decades.”

That ensures an active market for producers, which is good news for landowners who operate or lease their land to others.

We are going through a negative global food supply shock due to 3 factors:

At the moment, food prices have risen practically all over the globe and this benefits both producers and agricultural landowners. 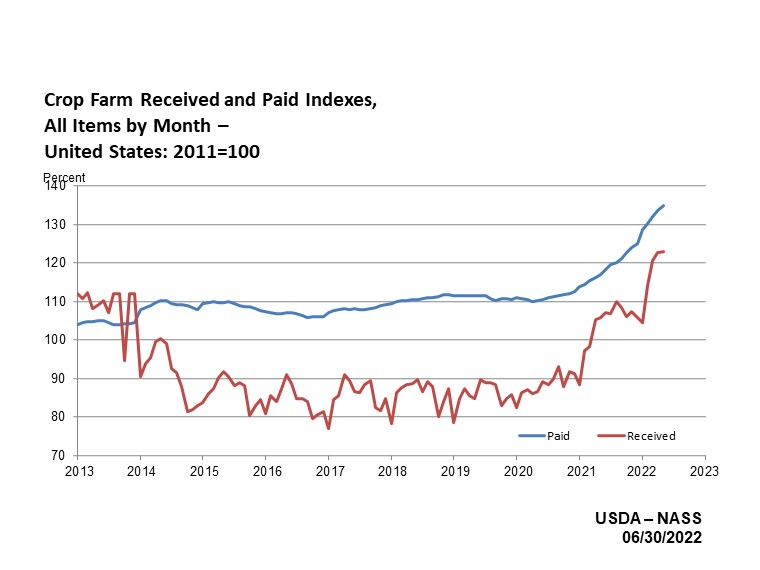 According to the U.S. Department of Agriculture, the Index of Prices Paid and Received for Agricultural Crops has been rising steadily since the pandemic. In fact, with a 2011 base basket of prices we are reaching levels between 120 and 135 to date.

As we can see, in times like the present, investing in farmland can generate better inflation protection than stocks and bonds.

“There are more than a few who claim that investing in farmland is like investing in gold, but with production…”

“Farmland owners can take advantage of depreciation tax deductions to their advantage.”

These deductions apply for equipment, tools and improvements made, even some crops are eligible for this type of tax break.

Also, in many cases, interest on farm mortgages is tax deductible.

On the other hand, depending on state legislation, property taxes may be lower for agricultural land compared to residential or commercial land.

Who are the largest owners of agricultural land in the U.S.?

There are different types of land, including agricultural land and land with other characteristics and uses. There is even land that is not agricultural but can be converted to agriculture.

“If we focus strictly on agricultural land, it is estimated that the main owners of this type of asset are Bill and Melinda Gates, who have been accumulating these acquisitions over the last decade.”

According to the industry trade publication, The Land Report by 2021, the Gates’ had accumulated nearly 270,000 acres across the U.S., of which 242,000 can be categorized as farmland:

Questioned about this large accumulation of agricultural land, Bill Gates responded that it was due to interest in seed science and biofuel development, rather than climate change or any other particular issue.

Ranking of the largest agricultural landowners in 2020

According to The Land Report, the 2020 ranking was composed as follows:

The top 5 farmland owners in the U.S. are private individuals or families concentrating 932,000 acres of arable land.

However, if we are talking about land in general, it is worth noting that the 5 largest landowners in the U.S. are as follows according to the same publication:

These owners accumulate no less than 10,257,500 acres of land of various types. These vast expanses include extensive natural resources, forests and great biodiversity.

Certainly, over the last decades there has been a trend towards concentration of agricultural and non-agricultural land in the US.

How to invest in farmland in the U.S.?

Any US citizen or foreigner can invest in farmland in the US. with the exception of some states that prohibit foreign participation, such as Mississippi, Hawaii, Oklahoma, North Dakota, Iowa and Minnesota.

Of the rest, if an individual meets the requirements, he/she can invest in this type of asset.

The U.S. has a developed real estate market and very clear property laws.

The investment can be made directly or indirectly. Let’s see: 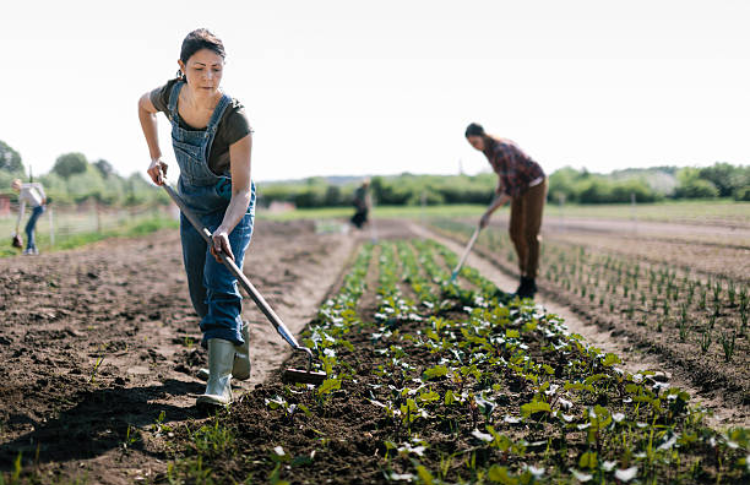 An individual can invest in agricultural land directly through 3 methods:

Purchase and lease back from the current operator

You can purchase an operating farm through a sale-leaseback transaction, in which the current operator continues to work the farm and pays rent to the new owner.

This may be the least risky alternative, however, in these cases the land tends to cost much more, which reduces the potential profit.

Purchase and lease to a new operator

You can buy a farm and lease it to a new tenant.

This option may be more profitable, but it involves the difficulty of finding the right operator, even more so, when statistics indicate that the population of tenant farmers is rather declining.

Conversion of non-agricultural land to farms and leasing

You can acquire land that is not being used for agricultural purposes and convert it into a farm.

This may be the most profitable method of all because the land is purchased at a lower cost. However, it requires a great deal of investment and work to adapt the land, define the appropriate crops, and find an efficient operator.

When investing directly , special attention must be paid to 6 critical aspects that will have an impact on the productive capacity of the farmland:

One of the most common ways to acquire farmland at competitive prices is through auctions.

According to Statista the top 10 states with the most agricultural farms in 2021 were Texas, Missouri, Iowa, Iowa, Oklahoma, Ohio, Kentucky, Illinois, Tennessee, California and Minnesota.

These represent a good choice because of the abundant supply, although high-quality land exists in other states as well. 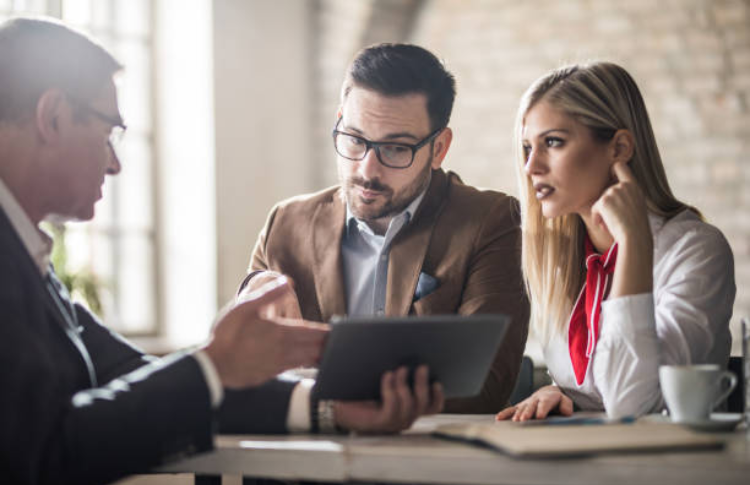 Investors who do not want to go through the process described above, or those who do not have large amounts of capital, can invest in farmland indirectly through a real estate investment trust:

A real estate investment trust is a company that owns, operates or finances income-producing real estate.

It is based on the mutual fund model, pooling the capital of numerous individuals.

“This makes it possible for retail investors to earn dividends from real estate investments, without having to purchase, manage or finance any property themselves.”

Advantages and disadvantages of investing in a REIT

Let’s look at 2 REIT’s that may come to be considered by investors:

Based in Virginia, USA, it is engaged in the business of owning and leasing agricultural land. It owns approximately 164 farms comprising more than 112,542 acres in 15 U.S. states. as well as various farm-related facilities.

The company’s farms are located in regions where its tenants can grow fresh produce, such as berries and vegetables, which are generally planted and harvested annually.

It also owns farms with permanent crops, such as almond, apple, cherry, fig, lemon, olive, pistachio and other orchards, as well as blueberry plantations and vineyards.

In addition, it has several agriculture-related facilities, such as refrigeration, packing, processing and storage facilities.

Let’s take a look at the weekly candlestick and MACD chart for the NASDAQ-listed LAND stock: 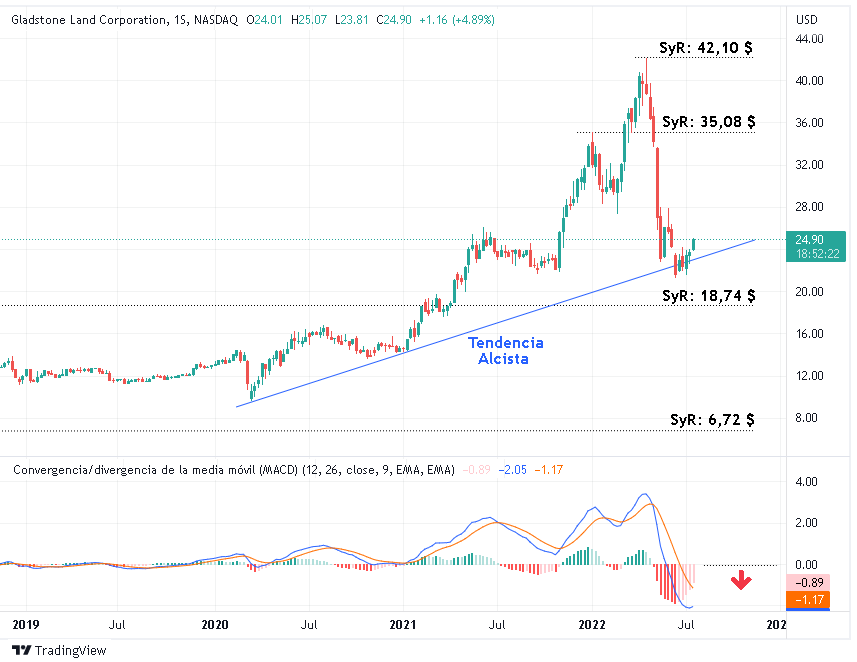 Since the pandemic in 2020, the stock developed an uptrend that continued until April of this year, when it reached an all-time high of $42.10. In that 2-year span, the stock appreciated 338.1%.

Since then, however, it has fallen by 40.9%; a product of below-expectation earnings in the last 2 quarters. In fact, during June the price broke below the uptrend line.

In the lower panel of the chart, the MACD indicator lines are in negative territory, reflecting the loss of price momentum.

The next support level is around $18.74; so it is prudent to watch whether price can hold current levels and gain momentum.

“Current circumstances imply caution ahead of the interest rate hike expected at the next Fed meeting at the end of July. Nevertheless, LAND may be an option to consider at current price levels.”

Based in Colorado, USA, FPI owns and acquires farmland in North America, and also makes loans to farmers, secured by agricultural real estate.

It has approximately 26 crop types and more than 100 tenants. FPI’s portfolio is used to produce primary crops, such as corn, soybeans, wheat, rice and cotton, as well as specialty crops, such as almonds, citrus blueberries and vegetables.

“Its market capitalization is around $747.30 million and the dividend yield reaches 1.68%.”

On the other hand, under its Loan Program, the company provides financing to outside farmers (both tenant and non-tenant) for property acquisitions, working capital, operational farming activities, farm infrastructure projects and other farming activities.

Let’s take a look at the weekly candlestick and MACD chart for NYSE-listed FPI stock: 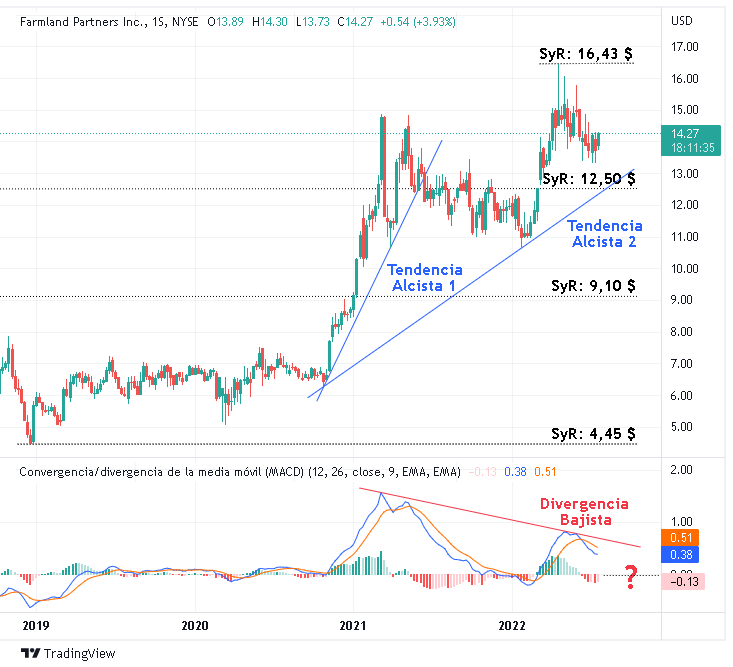 The trend is still in force, above a support level around $12.50.

However, in the lower panel the MACD indicator lines reflect a bearish divergence. Even when the price reached higher highs with respect to 2021, on the indicator we observe lower highs.

“The price is likely to trend lower. In fact, the price is at relatively high levels, so at this time it is advisable to stay out waiting for more attractive price levels.”

As we have seen, the world’s wealthiest individuals and families have turned to investing in farmland in the U.S. Now you know the top 5 reasons and relevant facts surrounding this trend.

However, contrary to popular belief, the retail investor can also participate in these markets indirectly through various stock assets.

We hope you found the article helpful in identifying other asset classes and how to invest in them.