Is it time to buy shares of Lucid Motors, the “Tesla killer” par excellence? 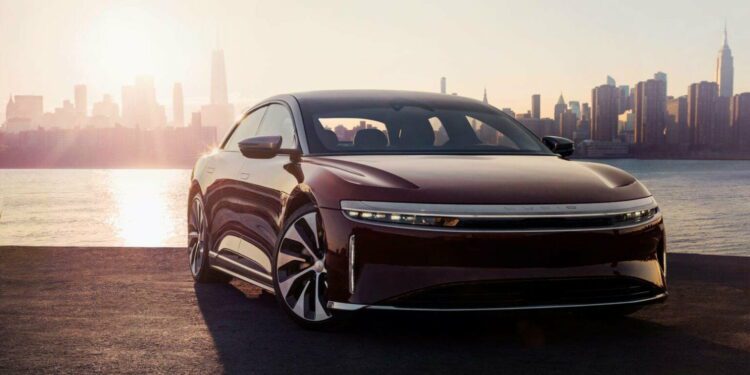 In this article we explain why investing in Lucid Motors shares can represent a great opportunity. The young electric car maker based in Menlo Park, California, is making strides toward market consolidation, with an eye on Tesla.

Lucid was born from the hand of Peter Rawlinson, the former chief engineer of the celebrated Tesla Model S. In its early days it was backed by investors such as Sumitomo, Tsing Capital, LeEco, Venrock, and JAFCO, among others.

The investment of the first $131 million in 2016 to materialize the project was not enough. The company needed more money to finish its plant. Those were very difficult years, so much so that it was on the verge of going bankrupt.

Lucid has always been clear about one thing: it didn’t want to go to market until it had a car that could rival and surpass Tesla, its immediate competitor.

Since then, it has been developing its luxurious, innovative, and exclusive Lucid Air with which it hopes to dominate the high-end electric car market segment.

Where does Lucid Motors come from?

Lucid was born under the name Atieva in 2007. Its founders were Bernard Tse, Tesla board member, and entrepreneur Sam Weng. In its early days, the company focused on developing technology to make electric car batteries.

Thanks to the innovation and research they did on batteries in those early days, today Lucid Motors is the car with the longest range on the market, with 836 km of range per charge.

After a maturation process, Atieva was transformed into the current Lucid Motors at the end of 2016. By then the company had already publicly announced its intention to engage in electric car manufacturing. Although it had already been doing so quietly since 2014.

After that point, the company began to evolve, but more money was still needed. Delays continued and it wasn’t until September 2020 that Lucid was finally unveiled.

The entry of new capital from the Saudi Arabia Public Investment Fund (PIF), allowed the company to finally get off the ground. Lucid, which was on the verge of bankruptcy, was injected with $1.3 billion, equivalent to 67% of the share capital.

Salman bin Abdulaziz, renowned businessman, king of Saudi Arabia, and one of the richest people in the world saw Lucid Motors as an opportunity and decided to do whatever it took to get the promising company off the ground.

As well as other companies in the sector, Lucid Motors is going public thanks to an agreement with a SPAC (Special Purpose Acquisition Company), whose valuation is $24 billion. Thus, to go public, Lucid Motors merged with the special purpose acquisition company Churchill Capital IV Corp.

SPACs are companies with no operating activity at their inception. However, their shares are issued in a stock market with the purpose of acquiring another company or merging in a certain sector. This is a more efficient and faster process than the traditional IPO (Initial Public Offering), a slower and more bureaucratic mechanism that also allows a company to start trading.

Why does Lucid Motors stock has potential?

Market analysts believe that in a matter of a few years Lucid Motors could be the next Tesla, as explained in the Bank of America report, which includes a buy recommendation on the stock.

If Tesla continues to lose market share to ambitious new competitors, Lucid Motors is likely to overtake it. Although the audacity and vision of its owner, who always manages to come out on top, should not be underestimated.

However, the value of the brand and the company’s recent losses, bode well for a change of scenery very soon. Lucid Motors’ technological advantages are growing every day and its market expansion plan seems to be heading in the right direction.

This signal has generated a shockwave in Lucid Motors’ share price growth and interesting buying appetite. Its largest shareholder is the Saudi Arabian sovereign wealth fund and it will soon have an equity value of $11.75 billion.

The Lucid Motors share price is about $20. So the implied pro forma equity value is in excess of $35 billion (Tesla, by comparison, has a total capitalization of $751 billion).

Lucid Motors has many strengths but among the most outstanding advantages of this promising company, we can mention the following:

As we can see, while expectations for success on Lucid are growing on Wall Street, Tesla has a higher bar. Tesla will have a harder time staying on top and delivering for its investors. Lucid Motors, on the other hand, will be able to more easily meet and exceed such expectations.

2. Lucid Motors manufactures cars that are superior in technology

The extraordinary engineering team at Lucid Motors is conceiving a series of cars unsurpassed so far. Not just in technology, but in design. Lucid’s premium cars are in a position to compete with anyone else in the world, including Tesla.

The company is making superior vehicles. It’s luxury Lucid Air will become the best luxury electric car in the world, unmatched by any other.

Its most powerful version, the Lucid Air Dream Edition, has more than 800 kilometers of range and around 1,100 horsepower. Specifications that make it surpass any Tesla on the market.

That’s why critics consider Lucid Motors to be above Tesla in electric vehicle engineering. Its cars have an undoubtedly superior level of technology, the result of the years Lucid Motors put into research and development.

They are comfortable, luxurious, and spacious inside and feature world-class autonomous driving commands. They possess two-way fast charging and have all kinds of displays and connectivity.

Their batteries, designed in collaboration with LG, have made successful inroads in Formula E. Lucid Motors’ cars will have 113 kWh batteries, based on an ultra-high voltage architecture of +900V. Much higher than Tesla’s whose batteries, at best, are 100 kWh and 450V.

This gives them a range of 483 kilometers with just 20 minutes of charging. In addition, it has chargers that allow taking advantage of the 350 kW peaks.

According to data from last June, bookings for the Air are over 10,000 units. And the count continues to rise every day. The Lucid Air Dream Edition is priced at $169,000 and its reservations sold out soon after it was announced.

The other models, such as the Air Pure, have a pre-booking price of $77,400; the Air Touring $95,000 and the Air Grand Touring $139,000. Before being delivered, the vehicles undergo rigorous quality control at the plants, Rawlinson explained.

The steady increase in demand forced Lucid to accelerate its plans to expand its manufacturing facility in Casa Grande, Arizona. The plant currently employs about 2,000 workers. To this end, it is investing $350 million in capital expenditures.

The company planned to make these investments between 2021 and 2026 to raise its production to 34,000 units per year. The new plans include “an accelerated phase” of assembly of the Gravity SUV and ramping up to 53,000 units per year of its Air model by 2023.

How to buy Lucid Motors stock

If you want to buy Lucid Motors shares, the option recommended by Investor Times is the broker eToro.com, an investment platform used by more than 20 million users, based in London, and authorized by CySEC and the FCA (the UK regulator).

To learn more about this broker, you have at your disposal an eToro review we recently put together.

When it comes to buying Lucid Motors shares, eToro offers us a great advantage: No commissions of any kind (0%) on the purchase, sale, or custody of shares. Another important point in favor of eToro is that it allows you to add funds to your account immediately by credit card, PayPal, or bank transfer (among others).

> Go to eToro.com to buy shares of Lucid Motors without paying commissions <