Investing in Palantir stock, the great promise of the decade 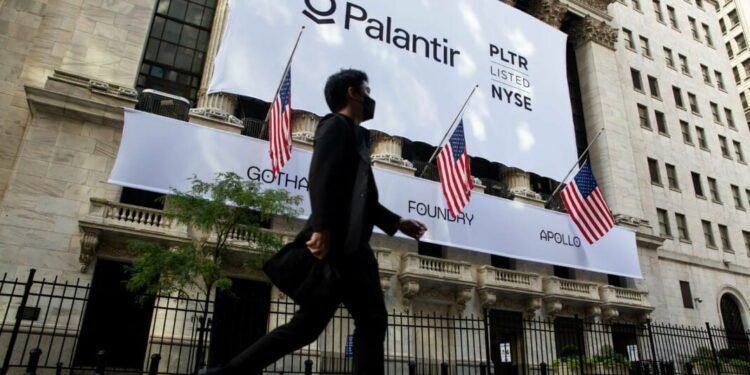 Palantir Technologies is one of the most attractive companies when it comes to analyzing the future price of its shares. This qualifier (“attractive”) does not mean that investing in Palantir is a great idea, nor is it a lousy decision, but rather points to the challenge of anticipating the value performance of a company that is outside the usual Wall Street standard.

Palantir is not a company that extracts or sells oil (like Exxon Mobil), does not manufacture smartphones (like Samsung or Xiaomi), is not a “physical” retailer (like Walmart), nor does it specialize in online commerce (like Amazon).

Palantir’s activity is, for “mortals”, a real unknown. A mix of developments in digital infrastructure and massive analysis of big data and artificial intelligence, combined with an oiled lobbying capacity in the highest governmental spheres, especially in the United States.

Palantir offers itself with the slogan “Foundational Software of Tomorrow. Delivered Today”, and on the home page of its website it describes its work as a company that “creates software that enables organizations to effectively integrate their data, decisions, and operations”.

As positive points when making the decision to invest in Palantir stock, it can be said that it enjoys high prestige in the technological and organizational management spheres. In addition, it has a presence in the strategic field of image recognition and facial identification, a business segment that has a huge future.

The negative assessment comes from the side of the links with the security forces (armies, police) of different countries. This necessary relationship with governments has generated strong criticism from human rights organizations, something that may influence its future assessment.

In short, it can be said that Palantir is a company that was born as a startup specializing in big data and artificial intelligence, which debuted on the stock market in September 2020 and which, for many specialists, will be the Apple of the third decade of the 21st century.

And a not minor fact: it still does not give profits.

How Palantir was born and what it does

For governments and businesses, Palantir’s products provide immediate and analytical connectivity between an organization’s billions of data, which aids good decision-making.

An old phrase on Wall Street goes, “If you want to know if a company has a future, look at its customers.” And Palantir Technologies’ customers are some of the best you can find in the market: from several U.S. Government agencies (such as the CIA and the Pentagon) to Morgan Stanley, Airbus, FCA, and Ferrari, just to mention a few.

It was born in 2004 from the hand of one of Donald Trump’s few allies in Silicon Valley, Peter Thiel, co-founder of PayPal together with Max Levchin.

Thiel, along with other young computer scientists, such as Joe Lonsdale and Stephen Cohen, advanced the development of Palantir’s initial software, later refined with the injection of U.S. government funding and private contributions.

Palantir is named after the “seeing stones” from J.R.R. Tolkien’s Lord of the Rings saga.

Although it has always maintained complete secrecy, which gives it an air of enigmatic company for its rivals (almost all its competition is in China), it is known that the first software was developed from the security app used by PayPal to detect fraud operations.

The company’s entire business focuses on finding, relating, and analyzing information to identify everything from computer vulnerabilities to potential terrorist attacks.

Palantir (PLTR) shares debuted on Wall Street in September 2020 at just over $9.00 and in just 45 days their price increased threefold: on November 15 they were already selling for $27.50.

As for Palantir’s fundamental analysis, it can be said that the U.S. company has been showing a very interesting increase in sales in recent months, according to its last report: $376 million for the quarter ended June 21, 2021. That’s up 49 percent from the same period last year.

The next earnings report is released on November 17.

Looking only at what happened in the United States, revenues advanced 90 percent year-on-year; and it closed 62 deals of $1 million or more, of which 30 are for more than $5 million and 21, for more than $10 million.

But it’s not all roses; Palantir’s expenses are also high and outstrip sales, so its losses are climbing: $125 million in the same period ending in June.

The problem is that it has huge operating expenses, something that – for now – it doesn’t seem to have been able to fix.

Most of Palantir’s cash goes on hiring staff and investing in technology. This is good because it means that, in the long term, it will add sustainability to the business.

In the same report, there is a very encouraging statistic: its customers are spending, on average, almost 35 percent more than before.

Analysts, in the majority, understand that there is potential in Palantir shares, and say that the price will “explode” when the company breaks even. The company expects its annual revenue growth to be 30 percent or more through 2025.

Palantir shares are among the most popular stocks in the Wall Street Bets community on Reddit, the same community that made GameStop stock (GME) have the attention of the financial world this 2021. This might not be such a good sign, all since “the guys” at Reddit might get to play with PLTR and no one seriously invested wants that.

One point very much in Palantir’s favor is that it knows how to adapt to change. A good example is its harnessing of the coronavirus pandemic. According to a report in the New York Times, when Covid-19 threatened the world, Palantir decided to be part of the search for solutions and teamed up with a dozen countries for the provision of technology to track and contain contagions.

This remarkable speed of response underscores that its software is flexible and can perform multiple tasks, beyond military or homeland security developments. Suffice it to say that the U.S. Army uses it for logistics, Credit Suisse uses its algorithms to combat money laundering, and the German pharmaceutical company Merck uses Palantir software to speed up the development of new cancer drugs. Even Ferrari analyzes the performance of its vehicles in Formula 1 races with artificial intelligence developed by Palantir, explains the New York Times.

Palantir Gotham is the “military” product par excellence, and also the most discussed. It is used for data management, analysis, and security. Using cameras, it maps objects, people, places, mobile elements, and events and the software relates them to each other looking for connections. The goal is to find links that are not in plain sight. It is used to detect everything from criminal networks to terrorist attacks. It is used by analysts at the U.S. Department of Defense.

Palantir Foundry is aimed at corporations. For example, it can integrate a company’s entire information system and link them together. It is used by everything from consulting firms and investment funds to automakers and biotech companies.

Palantir Apollo, finally, is the product that links the other two software in the public cloud.

In short, on the one hand, the growth prospects of the segment in which Palantir has positioned itself (big data, artificial intelligence, facial identification, security) are really promising. Its numbers show it: it is growing in customers, in revenues, and in good reviews. Even when it doesn’t turn a profit, the value of its shares grew 150 percent since its initial public offering.

However, its contracts with the Pentagon, the CIA, and police departments in many U.S. cities are controversial and, according to some organizations, violate human rights.

What there is no doubt about is that“data is the new gold,” and Palantir is exceptionally well placed to benefit from the big data revolution of the coming years. Its business model is attractive and, as demonstrated, highly adaptable and resilient; Palantir’s turnover is increasing with each passing year and is projected to continue to do so for decades to come; and, so far, its management team has done a solid job.

To summarize, Palantir shares present an interesting medium-term profit potential, more so given that the company is currently trading at just over $20 — a price we identify as an attractive buy level, located below the 200-day moving average (blue line in the chart above).

How to buy Palantir stock?

If you want to buy Palantir shares, the option recommended by Investor Times is the broker eToro.com, an investment platform used by more than 20 million users, based in London, and authorized by CySEC and the FCA (the UK regulator).

To learn more about this broker, you have at your disposal a detailed review with our eToro reviews.

When it comes to buying Palantir shares, eToro offers a great advantage: No commissions of any kind (0%) on the purchase, sale, or custody of shares. Another important point in favor of eToro is that it allows you to add funds to your account immediately by credit card, PayPal, or bank transfer (among others).

> Go to eToro.com to buy Palantir shares without paying commissions <

Legal and Risk Disclaimer: NAGA is a platform that offers CFD and non-CFD products. 77% of retail investor accounts lose money when trading CFDs with this provider. You should consider whether you can afford to take the high risk of losing your money. Cryptoassets are highly volatile and unregulated investment products. They do not have EU investor protection. Your capital is at risk.
Go to the complete ranking of the best brokers
Tags: Investing in PalantirPalantirPalantir shares

Jefferies anticipates difficulties for Lululemon: there is room to wait