Is Nike stock a buying opportunity? Revenues, earnings and a bit of a storm

Nike's profits up 6% for the year, but its shares continue to copy global economic woes 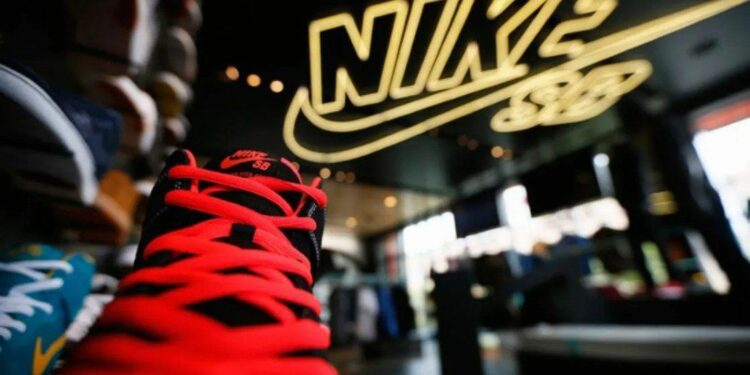 Sales in China are impacting Nike’s business, but the Oregon-based company still ended its fiscal 2021, which closed in May, with more than acceptable growth for a year that still had problems stemming from the coronavirus quarantine.

In the last fiscal quarter, the U.S. company’s performance declined due to the confinements in the Eastern giant and the consequences of the untimely Russian-Ukrainian war.

Specifically, Nike reduced its sales by 1 percent between January and May, and cut its profit by 5 percent in the same period.

In addition, in the last three months Nike recorded extraordinary expenses of more than 148 million dollars due to the forced disinvestment in Vladimir Putin’s country and the transfer of its business to a distribution company in the three countries of the southern tip of America, Argentina, Uruguay and Chile.

John Donahoe, who chairs the company, said its strategy is on track and called it “more than successful.”

The company explained that the rise over the past year was specifically because they decided to take control of the business through their own stores and direct-to-consumer sales, avoiding intermediaries as much as possible.

By region, the sports brand’s business rose 8 percent in the United States and Canada during the fiscal year, but was down 10 percent in China.

In European countries, Nike’s figures were up 9 percent.

In the last quarter alone, sales in China were down 20 percent.

By sector, earnings in footwear, the most important sector for the brand, were up 4 percent, and in the apparel business there was a 5 percent increase.

On the other hand, sales of equipment items improved by more than 17 percent.

Nike also improved its margins by 121 basis points to 45 percent.

The multinational indicated that this advance was due to the expansion of its business, an increase in full-price sales (without discounts or offers), positive exchange rate results, and higher inventory bookings in China during the last three months.

At the close of the fiscal year in May last year, the U.S. company held inventory worth nearly $8.5 billion, up 22 percent from 2020, determined by high stock in transit due to ongoing supply chain bottlenecks.

Nike plans to buy back shares

Wall Street analysts note that Nike beat expert forecasts, although it should be noted that they were conservative.

However, they all highlight the company’s ability to continue its operations in a context marked by volatility, with very high inflation and major problems in the supply chain.

Analyzing Nike’s results presentation in detail, one of the most important novelties is the new share buyback project it is going to carry out.

The company has announced that its board of directors has authorized a new 4-year program and will allocate 18 billion dollars for the repurchase of Class-B common stock.

The complex economic events around the world are reflected in each of the figures published by Nike in its annual balance sheet. But even so, it is possible to highlight the good management of the U.S. company in a difficult context. There are slight traces of slowdown in some metrics, but they are few and far between.

One example is the gross margin, which has dropped by 80 basis points year-on-year to close to 45 percent (in the previous three months it was over 46 percent). And the wholesale sector (wholesale), which has registered a 7 percent drop compared to the previous year (but this was part of the strategy).

On the contrary, and as explained above, analysts underline the successful performance of the strategy that the company started to accelerate direct consumption.

The “Nike Direct” strategy has reported revenues of almost 5 billion dollars, which shows a 7 percent growth compared to the last three months of last year.

Repercussions of Nike’s financials on the market

The market has read these figures positively, and the shares showed a 1 percent increase in trading following the announcement of the results.

This data, although circumstantial, was important due to the fact that so far in 2022 Nike’s shares have fallen more than 30 percent.

Likewise, beyond the punctual increase in Nike’s share price after the news about the improvement in earnings, the truth is that they could not escape from the terrible year that the whole market is having.

Nike’s stock price already erased everything they had gained after the dizzying growth they had had from June 2020 to October 2021.

In order to repower its presence in China, the Oregon-based company has devised a new strategy based on current customer trends in that country.

Consumers in the Asian giant are increasingly concerned about purchasing goods from local companies.

Nike is not a local company, nothing like that, but it had an idea and is implementing it: in the U.S. company’s internal marketing, it is called “From China to China”.

Under this plan, the idea is to prioritize collaborations with digital apps in China and sign partnerships with small retailers in each city or province of that country.

According to Matt Friend, CFO of Nike, “the goal in the local Chinese market is based on our ability to connect with Chinese companies and make them see that we are part of their ecosystem”.

Finally, the Oregon-based company announced its definitive exit from Putin’s country in rejection of the invasion in Ukraine.

Nike said that one of its priorities is to make sure it fully supports its employees while responsibly scaling down its operations in the coming months.

In March, following the invasion, the sports brand had decided to “pause for a while” its sales (so they called it) in the Russian market.

In a conference with analysts convened for the presentation of the company’s accounts for the penultimate quarter, Nike’s CEO, Matthew Friend, had stressed that the company’s business in Russia and Ukraine represented a figure of less than 1 percent of total revenues, so they did not expect a significant impact.

On the contrary, not leaving Russia could have been worse for the brand’s image, as it would surely have turned the international community against it. And times are not ripe for such a boycott.

After announcing the definitive exit, Nike’s websites and app in that country were deactivated.

The brand’s stores, which had been temporarily closed, will no longer open.

In addition, the Nike.com design has been removed, leaving only a white background and a logo at the top of the screen.

Following the outbreak of the Russia-Ukraine war in late February, most global technology, apparel, furniture and service brands made announcements of closing their business or operations in the Russian market.

One problem facing international companies that want to leave Russia because of the war is the possibility that in the coming days the Kremlin will approve regulations allowing Putin to confiscate assets and impose criminal sanctions. That has encouraged some companies, such as Nike, to hurry their exit.

Nike founder wants to get into the NBA business

Phil Knight, founder of Nike, wants to buy the Portland Trail Blazers and would have bid $2 billion for the NBA team.

The billionaire submitted the offer in conjunction with Alan Smolinisky, co-owner of the Los Angeles Dodgers.

The team is currently chaired by Jody Allen, who is overseeing the trust after Paul Allen’s death four years ago.

Portland Trail Blazers confirmed to ESPN the possibility of this transaction, but stated that the franchise is not for sale.

Last year, Forbes had valued the Portland team at more than $2 billion, which left it as the 13th most valuable franchise in the American basketball league.

Knight, the now mogul who led Nike to glory and became Adidas’ most serious contender, had already left the company’s management in 2004, but holds 35 percent of the company’s shares.

His fortune is estimated at more than 46 billion dollars.

The American billionaire was born in Portland in 1938 and Nike’s headquarters are in Beaverton, about 10 kilometers from that city, for that reason.

Returning to the financial performance of the company founded by Knight, it must be said that the good report of its fiscal year 2021 is contradicted by the decline in the share price.

This, for analysts, becomes an interesting buying opportunity as they argue that the fall is related to the generalized collapse of Wall Street and not to the company’s own problems.

Experts in sports stocks say there is a long-term potential that anyone with cash on hand should take advantage of.

A company that reports revenues of more than $12 billion in just three months, and whose strategy is rated by most as successful, should not be overlooked.

Besides, we are talking about one of the strongest brands in the world: Nike.

And there’s more: Nike did not grow in better shape in 2021/2022 because there were confinements in China, its largest market by volume, so in a normal year in 2022/2023, things may be very different.

do consumers have less real income because of inflation? Yes, that is true, but it is also true that the most established brands, such as Nike, suffer the least from this type of phenomenon.

Jim Cramer, one of the world’s best-known hedge fund managers and now host of CNBC’s Mad-Money, said in the latest June issue that “despite the decline in the stock, the long-term projections remain intact.”

The expert also said that if you are going to buy shares of any company, they can all go down, but if there is potential for one to go up again after a few months, “it is Nike,” he said.

“For one thing, Nike wants to buy back its shares now, they have to see what happens in the market before it happens,” Cramer added.

He also explained that although analysts have lowered Nike’s stock price target, it is all related to the structural changes of the firm, something cyclical that will happen and that will give very good results.