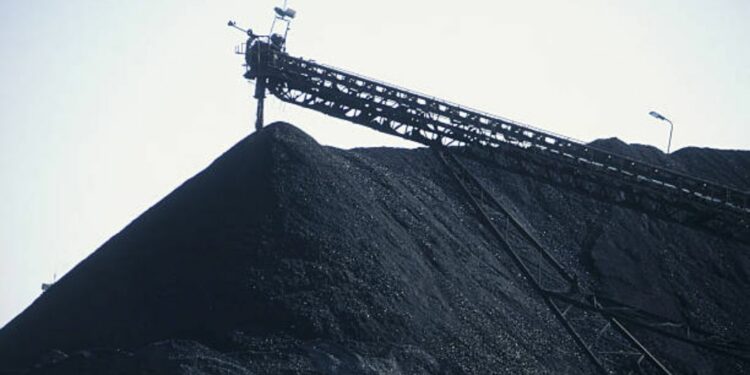 Coal is one of the fossil fuels that needs to be phased out of our energy diet if we are to slow global warming in the long term.

It is increasingly difficult to deny the impact of human activity on the planet’s average temperature.

However, Russia’s invasion of Ukraine has disrupted global energy markets, boosting demand for fossil fuels such as coal.

Although this change (which no one knows if it is cyclical) poses a climate dilemma, it is also true that it may open up investment opportunities in the short and medium term.

Let us not forget that, for example, the U.S. has the largest coal reserves in the world, even though the country plans to “decarbonize” power generation by 2035.

Here is one company that is benefiting from the coal price boom: its share price has risen by almost 700% in just over a year…

As we can see in the following image, courtesy of Bloomberg coal prices have risen to levels not seen since 2008, to over $100 per tonne.

This increase came about as a result of the post-pandemic recovery, which was accompanied by serious problems in supply chains that have contributed to the high levels of inflation.

Inflation, on the other hand, is based on a monetary imbalance that the world’s central banks are now trying to combat by raising interest rates.

“The expectation is that this trend in carbon prices will continue in the short term. The main factor that could halt such a trend would be an economic recession in the U.S. and Europe.”

However, if the recession takes place, the transmission mechanism could take several months to fully develop.

For the time being, European attempts to decrease dependence on Russian hydrocarbons are putting upward pressure on other resources such as coal. 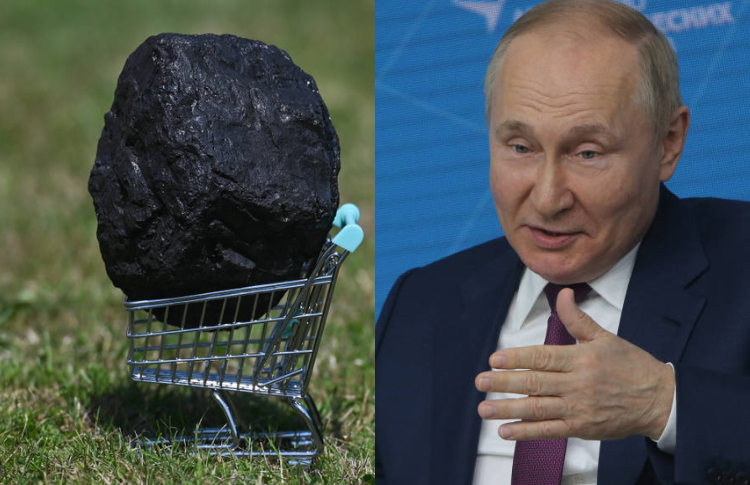 Should the world temporarily return to coal while the world energy market stabilizes?

This is not an easy question to answer given the long-term climate outlook. However, there seems to be a consensus that this is better than continuing to buy Russian hydrocarbons to finance the ruthless war against Ukraine.

That being the case, investors may well consider certain coal-producing companies to maintain their portfolio returns.

In that regard, we present one company that could be an interesting option: 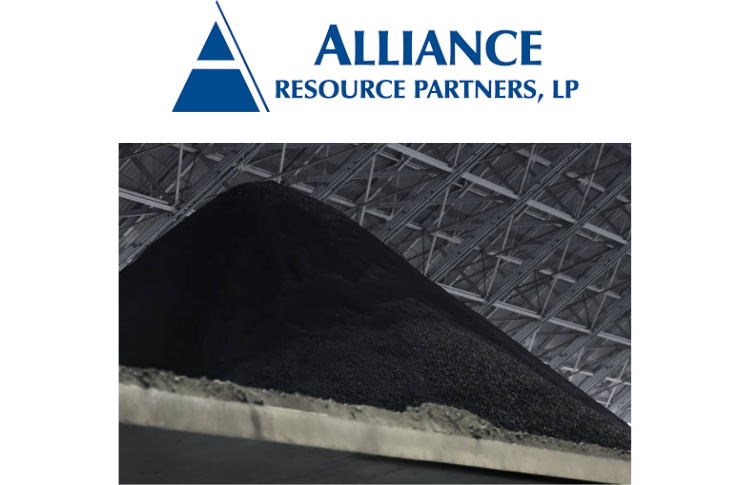 This is a coal mining company based in Oklahoma, U.S.A. It has 4 segments: Illinois Basin, Appalachian, Oil & Gas Royalties and Coal Royalties.

ARLP and the coal sector climb out of the pit

Let’s take a look at the monthly candlestick chart and MACD indicator for ARLP: 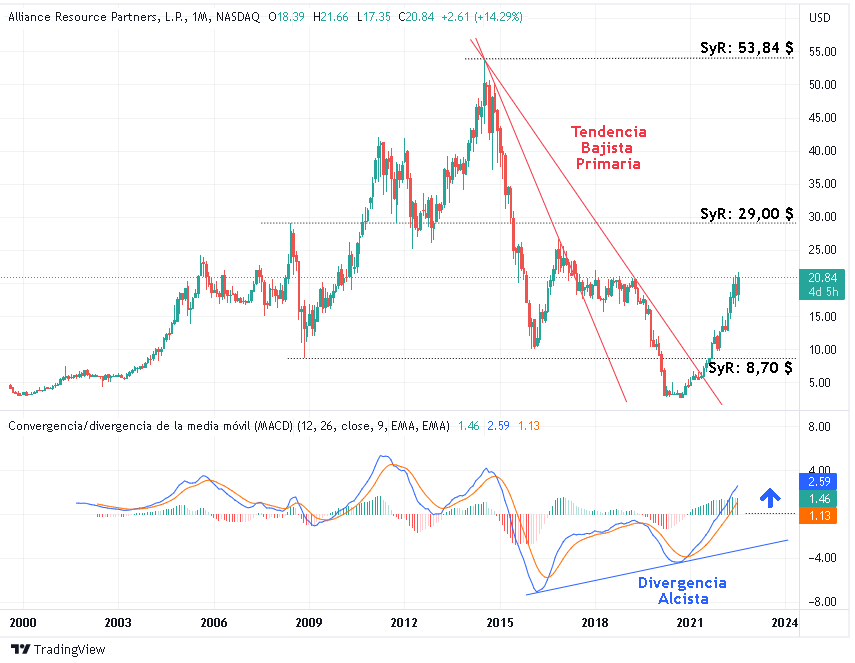 ARLP remained in a primary downtrend since July 2014, when it reached an all-time high of $53.84.

“However, due to rising coal prices and the energy crisis, the stock has gained bullish momentum, currently trading around $20.84. This represents absolute growth of $18.21 and 692.4%.”

Looking at the bottom panel, the MACD indicator lines showed a bullish divergence in October 2020, when the price was making a lower low.

In that case, the indicator was signaling a higher low and, in fact, the price continued to rise until it broke the long-term downtrend line.

On the other hand, the indicator lines are above the middle line of the histogram and with positive slope, so the stock entered strongly into positive territory.

The price is likely to correct downwards, but maintains strength to further develop the current uptrend. It could well reach the next resistance level around $29.00; 39.2% above its current price.

Everything will depend on the evolution of the global energy situation as a result of the war in Europe, the sanctions against Russia and, especially, the performance of the US economy. 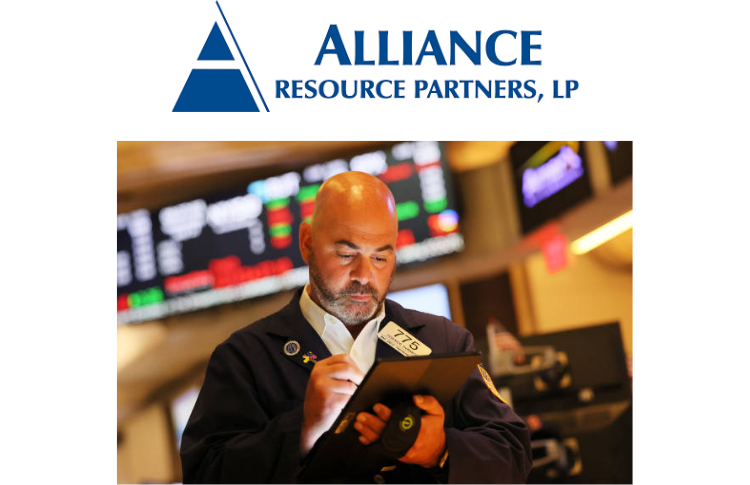 Based on the information available at Investing.com we highlight 4 highlights of ARLP:

Although it is yet to recover the revenues achieved in 2018 and 2019, current coal prices open the possibility of increasing its sales and margins.

2. It has a reasonable valuation

At its current price it trades at a P/E ratio of only 13.74; which is relatively low.

3. Its margins are acceptable and improving

4. It has low relative indebtedness

Its Total Debt/Equity ratio is only 36.63%; therefore, it has low levels of leverage.

The company is in the process of recovering its metrics, which are still below the levels reached between 2015 and 2019, although on an upward trajectory again.

Everything will depend on the ability of each company to take advantage of the price boom and increase its export volumes, after years of decline due to regulatory issues related to the abandonment of coal.

As he points out story by Timothy Gardner for Reuters:

“U.S. coal producers are trying to boost exports to take advantage of high prices since Russia’s invasion of Ukraine, but face major hurdles including transportation bottlenecks, labor shortages and a bleak long-term outlook that discourages investment in new mines.”

Certainly, coal is an energy source whose use will decline over the long term, but it may be that the current juncture will lead some investors to consider it as a short- and medium-term option in their portfolios.

For the time being, ARLP’s coal export volumes are estimated to increase to 6 million tons this year (2 million more than last year). In fact, according to CEO Joe Craft, the company is expected to add around 1.5 million tons more by 2023.

Remember that investing in stocks involves the risk of losing capital, in whole or in part.