The coming crisis in the world economy: Here’s what it will look like

Inflation has upset everyone's plans. The rise in interest rates will bring, at the very least, a recently unprecedented slowdown in the growth rate of the world economy. 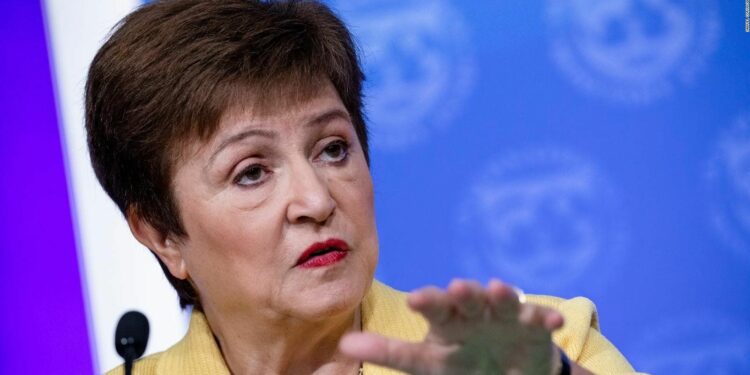 In recent months, the world has experienced a series of events that have significantly changed the economic horizon.

In the fall of 2021, in the presentation of its outlook, the IMF said that the global economy was recovering in spite of the outbreaks of economic recovery.

At the time, the international financial organization was projecting global growth of nearly 5 percent for the full year.

However, at the beginning of 2022, its estimate for global GDP suffered a notable downgrade to 4.3 percent. Already in April, the cut was worse, with projections standing at 3.5 percent.

The Russian invasion of Ukraine triggered a humanitarian crisis and must obviously be resolved peacefully. But it has also generated damage to the global economy that governments do not yet know how to fix.

In addition, as a preview of the next economic outlook (to be communicated at the end of July), the head of the Fund, Kristalina Giorgieva, said that 2022 is only a preview and that in 2023 “it will be worse”.

As if problems were lacking, came Russia’s decision to regain territories in Ukraine and prevent NATO expansion.

Thus, inflation, which was already starting to be affected at the end of last year due to the bottlenecks caused by the high demand after the restrictions imposed by the pandemic, grew to levels that have not been seen for forty years due to the rise in energy costs.

What was once thought to be a transitory state took root. To make matters worse, the war is stalling and inflationary trends are increasing.

And there’s more: interest rates. In 2021, the world’s most important central banks were withdrawing stimulus after 2 years of negative interest rates and abundant purchases of government bonds in order to give air to the economies after the pandemic.

The new plan, based on gradual interest rate hikes, first in the United States because it is at a more advanced stage of the cycle, and balance sheet reductions, was stalled in February when Putin decided to launch the invasion in Ukraine.

The Fed, the Bank of England and the ECB were forced to change their plans to accelerate interest rate hikes to quell inflation.

In a world that has enjoyed liquidity since the financial economic crisis of 2009, a restrictive monetary measure, such as the one countries have been taking for a few months now, is a blow to growth estimates, especially at a time when the main player for global GDP (China) is facing significant imbalances in its economic model.

For the time being, the consensus of experts only speaks of the fact that we are facing a major slowdown in the pace of growth, the latest forecasts of the International Monetary Fund are already outdated, but not many dare to speak of recession.

what does recession mean? Two consecutive quarters of negative growth.

However, there is no money, and that is a problem. The stock markets, which always anticipate trends, are having big falls.

The European war conflict has already added two ingredients, inflation and interest rates, and now it is targeting the third: growth.

Each area has its own characteristics. Let’s look at them one by one.

The eurozone has its own problems

Europe’s economy is in a very tight scenario, trying to balance itself against the onslaught of two forces: on the one hand, the one impacting inflation caused by the rise in energy prices.

On the other hand, a slowdown in activity.

These two forces are becoming more intense as the Russian-Ukrainian war continues, which is getting in the way of a way out of the economic crisis that caused the pandemic.

As the recovery in Spain and Germany, for example, is delayed relative to 2019, everything becomes more complicated.

What looked like it would be a recovery in the northern summer, may now be modified with the war, the bottlenecks caused by the new confinements in China or the changes of strategy in monetary policies.

The European Recovery Fund, which will have more than 800 billion available until 2027, will be a key moderator in the coming months, but the core of the problem remains latent.

War affects the world economy in general and Europe in particular

The war conflict has immediately hit the economy of the European region.

The countries were emerging from the crisis: they started 2022 with a growth of 0.3 percent. Spain, for example, at the end of last year was expanding by more than 2.1 percent.

Spain stood out among the bloc’s major economic centers, with growth of 4.9 percent this year and 3.2 percent next year.

With those forecasts, it was difficult to think of stagflation. However, these figures meant a 1.5-point drop in the expansion projection for 2022 and a rise in average inflation to 5.2 percent.

But as the months went by, the scenario changed: all international organizations changed their expectations: they lowered the expansion estimate for the European zone and for Spain as well, in addition to raising inflation forecasts.

With the summer halfway through, many indicators continue to worsen.

One example is the latest Purchasing Manager’s Index (P.M.I.), a survey of managers at hundreds of companies.

Last month’s surveys show a major slowdown in the services sector, and the industrial sector is also falling.

With indicators of price increases very strong, Europe appears to have entered stagflation, Jack Allen-Reynolds, an economist at Capital Economics, told a conference in London.

In a note to the media, María Jesús Valdemoros, a professor at IESE Business School, pointed out that we are going to be in a stage where there will be high prices and weak growth.

Russian gas is either the solution or the coffin

The biggest risk to this recovery is a generalized shutdown of gas supplies by Russia.

The European Central Bank forecasts that this could weigh on the growth of the eurozone economy, so that it would only grow by 1.2 percent this year and contract by 1.6 percent next year.

Such a situation seemed unimaginable just a few months ago. But a few days ago, Germany’s government raised its alert level with the projection of not being able to supply enough gas by September.

And therein lies the main fear of Frankfurt and Brussels: that Germany will go into recession and take the other partners with it.

The Munich Institute for Economic Research does not estimate that this will happen, but warns that all the suffering they received due to the war and the confinements in Beijing will cost Germany 1.5 percent of GDP. The institute indicates that in a normal year, the country would have started a recession.

What the European Central Bank will do

Faced with this, the ECB is debating whether to raise rates despite the risk of stifling growth or maintain looser measures with the threat of continued high prices.

It has now decided to curb net debt purchases and raise interest rates: 0.25 percent this month and 0.50 percent in September.

For the most aggressive investors, the European bank is too late, especially when other central banks have been raising rates for months.

The more conservative investors, on the other hand, recalling the ill-timed hikes of the former president of the European body Jean-Claude Trichet, are afraid that a hasty hike will stimulate an economic slowdown, especially if yet another external shock occurs, either from Russia or China.

With the announcement of the hikes, which has punished the risk premiums of southern European countries, fears of another sovereign debt crisis have resurfaced in the markets’ reaction.

For the time being, Europe’s central bank managed to satisfy them by announcing a new tool dedicated solely to containing risk premiums, despite the reluctance of The Hague and Berlin.