The global economic outlook: between inflation and recession

U.S. investors' expectations that the Fed will raise rates by a full point have declined. 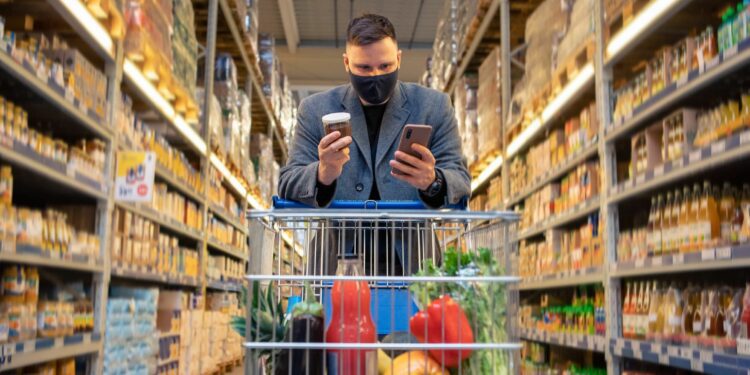 The entire world is struggling between unexpected and prolonged inflation and the risks of a deep recession due to interest rate hikes. Inflation is a consequence of the high costs of energy and other commodities, as well as the gigantic pandemic stimuli injected by governments.

This discouraging outlook occupies market sentiment. Investors are following with concern the movements of governments as they try to see signs that they will be able to weather the economic and financial difficulties the world is going through.

In the United States, investors believe that the Federal Reserve will not raise interest rates by one percentage point at the end of the month as expected. There are several factors that are influencing this new market sentiment regarding the Fed’s future moves.

For starters, expectations for long-term high U.S. inflation have cooled, Bloomberg notes. In addition, higher goods and services prices largely helped “a healthy increase in the value of retail sales,” the publication says.

After the U.S. government unveiled inflation data for June of 9.1% earlier in the week, bets of a higher interest rate hike grew. This new 40-year high generated concern on Wall Street and other markets.

Meanwhile in Europe, fears of recession are on the rise as record inflation hits that region. Investor confidence has been weakened by high energy and utility costs. Although, if a key Russian gas pipeline is finally reopened next week, European concerns may ease.

Let’s take a look at the current global economic outlook.

Stifling demand is the strategy behind raising interest rates. But while it could help tamp down inflation, it would also lead to a slowdown in economic activity. Either way, U.S. consumers will suffer pain.

However, expectations that consumer-level inflation will remain high in the long run fell earlier this month more than expected. Lower gasoline prices, on the other hand, contributed to greater investor confidence.

This combined with very strong retail sales data reflecting higher prices rather than an increase in consumer spending have improved the prospects for the Fed to raise the rate by a full percentage point this month. The retail sales growth data helped to allay fears of an economic recession in the country. 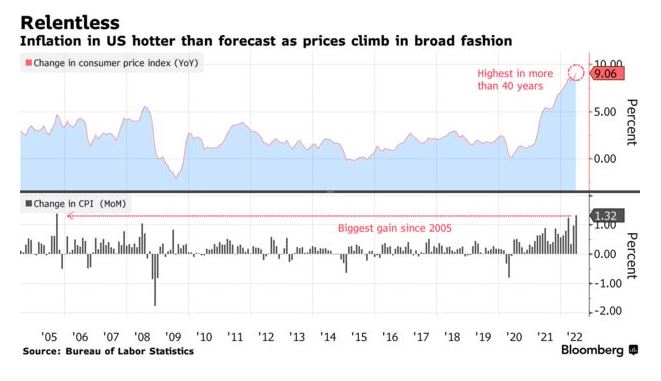 A key Russian gas pipeline is scheduled to reopen next week. Its effect on the European economy and the euro will be crucial. Indeed, experts estimate that this issue will have a greater impact than the European Central Bank’s decision to raise interest rates for the first time in a decade on July 21

Although the ECB’s rate hike announcement has already been digested by European investors, the question now remains as to whether gas supplies to Europe through the Nord Stream 1 pipeline that is under maintenance will be maintained

Some analysts fear that the gas flow will not be fully restored. Moscow could use the damage to the pipeline turbine as a pretext to definitively cut off gas supplies to Europe. 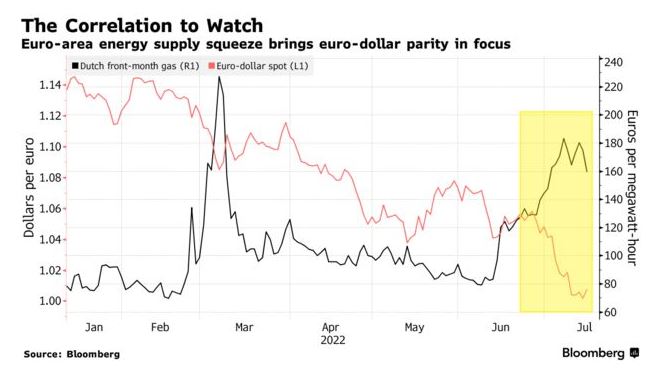 The likelihood of a disruption in the flow of gas to the eurozone countries continues to grow. This situation in turn increases the risk of a recession in the European bloc as inflation also remains at record levels, due to high energy prices.

A group of economists surveyed by Bloomberg believes that the probability of a sharp economic contraction in the region has increased from 30%. In a previous study such a risk stood at 45%. Whereas before the Russian invasion of Ukraine, this possibility was only 20%

Europe’s strongest economy is at risk of slipping into recession. A permanent cut-off of Russian gas supplies remains a permanent risk that Germany will have to face. 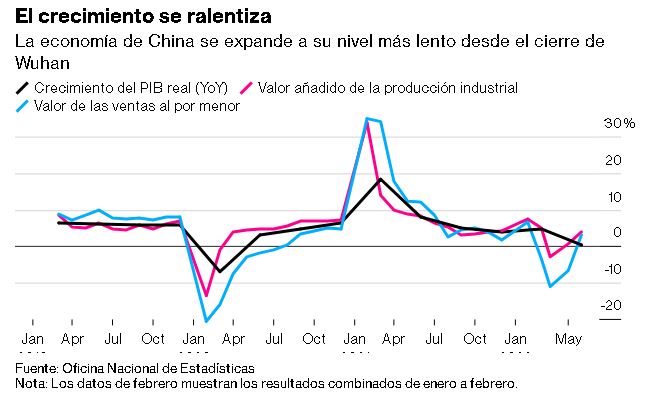 On the Asian continent, things are a little better. Although data point to a slowdown in China’s economy, it is still expanding. Its growth has become slower since the Covid-19 coronavirus pandemic was first publicly detected in 2020.

Although China – unsurprisingly – recovered sooner from the coronavirus outbreak than the rest of the world, it has also suffered serious economic impacts. The pandemic hit its economy again after a new outbreak was detected in Shanghai.

The Chinese authorities, perhaps fearful of unleashing a new wave of the virus worldwide, acted quickly and strictly this time. To the extent that they closed the port of Shanghai through which a large part of the world’s supplies of products pass.

According to the data, state stimulus to the economy is having a positive effect. The supply of credit to finance private production has increased, which will be reflected in the growth of economic activity this year and next.

What is happening in emerging markets?

Despite the war in Ukraine and its aftermath, in the second quarter of the year, Russia posted a record current account surplus of $70.1 billion. This was due to extra revenues from sales of oil, gas and raw materials that have reached record prices.

Such export revenues helped Vladimir Putin’s regime cope with and offset the impact of Western sanctions in response to the invasion of Ukraine. Energy prices and help from China and other allied countries have given Russia ample room to circumvent U.S. and European sanctions. 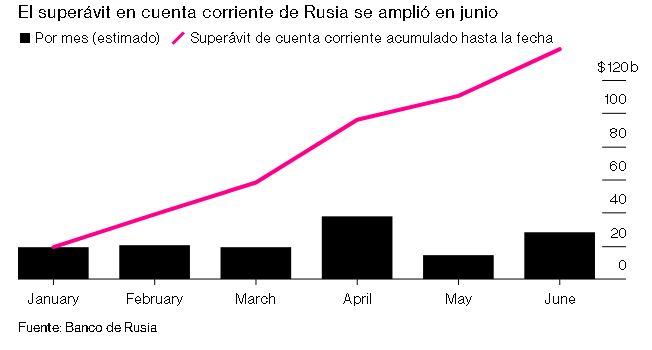 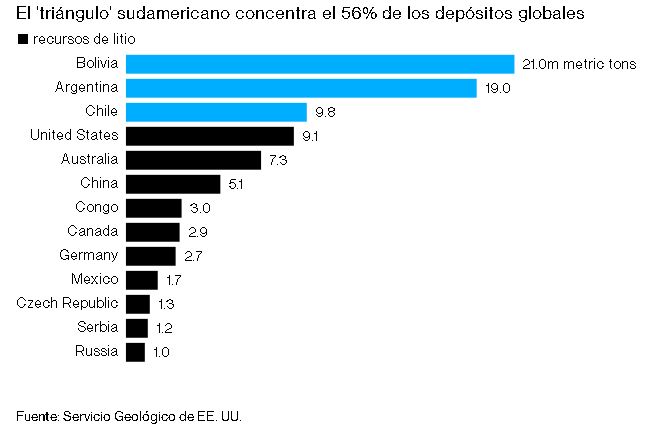 Several South American countries exporting raw materials, such as Bolivia, Chile and Argentina, have benefited from the crisis in Europe. Bolivia expects next year to start exploiting its immense lithium reserves together with its southern cone partners.

Lithium is used in the manufacture of batteries for cell phones, electric cars and equipment. Meanwhile, Chile and Argentina, which are already producers, are taking advantage of the high prices of the metal in the market. 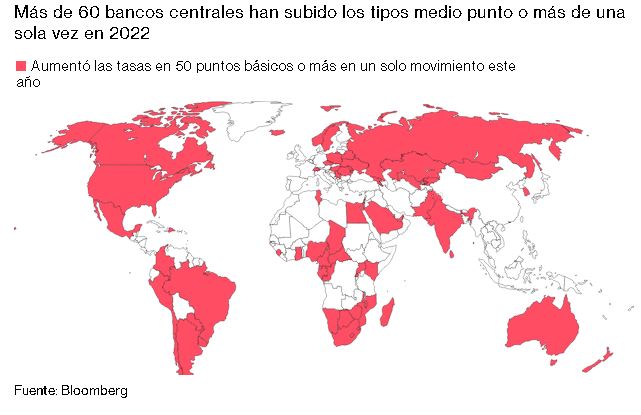 The rest of the world is suffering from the impact of inflation. Central banks globally following Fed policy have raised interest rates several times. The search for inflation relief has increased the cost of money and the cost of living.

Canada’s central bank raised its benchmark interest rate by one percentage point. The increase was expected to be smaller as it had made two other increases of half a point each earlier.

The most industrialized countries and emerging economies, members of the OECD, agreed to establish a global minimum tax of 15% to tax global technology companies

However, the implementation of this so-called “revolutionary” tax has encountered a number of technical obstacles. For the time being, it is not expected to be implemented until 2024 at the earliest

Everything suggests that high energy prices will remain high for several months and perhaps even years to come. This is indicated by the movements in supply and demand for oil and gas. Their impact on the world economy and politics is already beginning to be seen.

There is a global realignment from a geopolitical point of view. New power blocs are forming with China and Russia at the forefront, on the one hand, and the United States and Europe on the other. 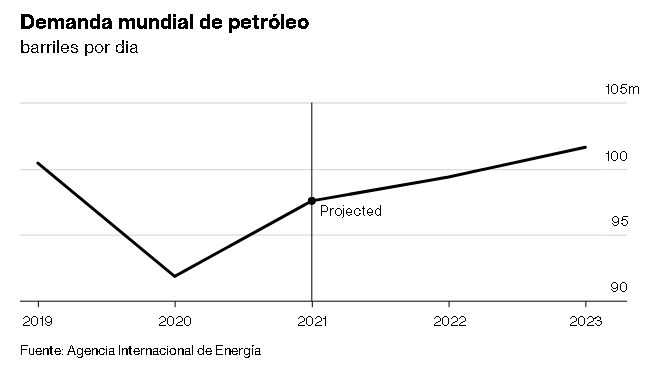