The technology sector is one of the hardest hit by the current macroeconomic conditions. However, some gems are in sight. 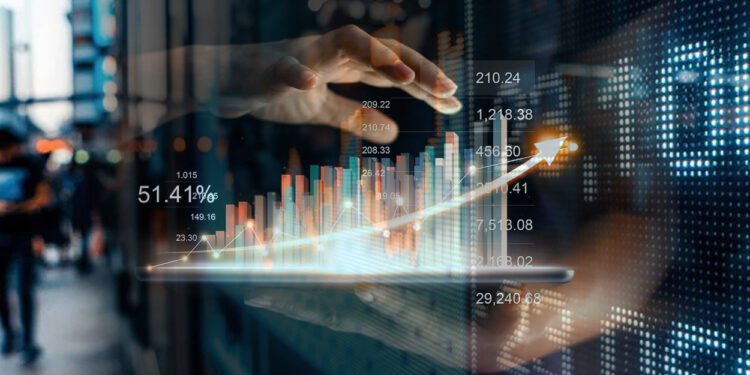 Since 2022 began, tech stocks became the main target of all the onslaught of this bad time. Big companies went to the floor in terms of revenue and many of them are on the ropes. Mass layoffs and a freeze on new hires seem to be the currency of course among companies in the sector.

This reality is acutely expressed in the stock market. Since the beginning of the year, red numbers have been present in most of these companies. Particularly, in March 2022, the Nasdaq entered a bear market, i.e. below the -20% barrier compared to the recent peak. Before this week’s opening, the index is at -26% despite the green numbers (1.3%) of this Friday’s close 2/12/22.

The outlook for individual companies in the sector looks bleak. The state of Meta and Netflix, among others, jumps out. Despite this, some companies seem to have better expectations for their businesses, even though interest rates remain high. That opens hopes for a probable recovery of the prices of their shares in the stock market. The good news: now the price of their shares is on the subsoil.

As mentioned above, stocks in the technology sector suffered multiple setbacks and much of them are still on the canvas. However, the picture appears to be changing as business plans adapt to the adverse conditions. Cost cuts are allowing many companies to make key investments to maintain productivity and sales.

In less than a year, the situation with technology companies has gone from resembling the 2000 bubble to showing signs of recovery. At least that is what Wall Street analysts quoted by the analysis portal TipRanks think. The profitability outlook for many technology firms has been improving markedly, and the same is true for efficiency. Optimism seems to be returning among analysts and investment capital holders.

“There is reason to believe that a wide range of hard-hit technology companies may rise, even if interest rates were to remain at these levels,” explains the website. These are the cheap tech stocks that could become a juicy source of returns for the coming year:

Do not lose sight of the fact that macroeconomic conditions remain hostile for most companies. Further falls in some financial assets are not ruled out, so do not invest in these stocks without first consulting professionals.

Most of the information for this content was taken from TipRanks and contrasted with data from Investing, Bloomberg and Yahoo Finance.

This well-known passenger transportation company is one of the most affected by the crisis. So far in 2022, its shares have lost 64% in value from their previous high. But the positive point is that the company has plans to move into the green field. It is noteworthy that at the gates of the recession, demand continues with some strength.

The benefit of the latter for Uber could be noticeable and, according to the aforementioned media, the results will be evident sooner rather than later. According to popular CNBC star Jim Cramer, the ride-hailing company will be “the last man standing.” These experts, as a whole, believe that the company has a competent management team to keep the competition at bay. They assert that it will rise despite the recessionary conditions ahead.

“According to Wall Street, Uber shares will rise more than 72% going forward.”

It is worth noting that results during the third quarter of the year were solid, which speaks highly of the outlook going forward. Although in that period the losses exceeded expectations, the performance was notorious, which provides confidence among analysts that the company is ready to “mature towards profitability”.

As 2023 progresses, Uber’s business model will demonstrate its capability. While taking the train or bus is still cheaper than getting around in its cabs, analysts highlight the time savings. Moreover, Uber is cheaper than keeping a car. Thus, the shares of this technology star could be among the biggest surprises next year.

As far as Wall Street’s outlook is concerned, it stands out that analysts are strong supporters of Uber. The average stock price target for 2023 is $49.07, a 72.05% upside. Hence, the shares can be considered a real bargain.

The second of these tempting stocks are those of TSMC, the Taiwanese semiconductor chipmaker. The importance of the components sold by this company is well known and many refer to them as “the oil of the 21st century”. It should be noted that the firm received a boost from Berkshire Hathaway. This investment giant bought a good percentage of shares.

It is noted that the production of this company is a fundamental piece for most of the large U.S. technology companies. One aspect that no investor should fail to look at is the fact that the company’s shares have been hit hard without representing major problems. On the contrary, the low value (-42%) would have been attractive to none other than the Oracle of Omaha, Warren Buffett.

The recovery of this company’s shares seems to be going from strength to strength. They were down as much as -55%, but are now approaching a rally. It should be noted that the fall in the stock market was surely linked to the possibility of forced reunification of Taiwan with China. However, the waters seem to be calming down and war looks less likely, allowing stocks to rebound. If that view is true, the recovery would be imminent and the buying opportunity unrepeatable and immediately actionable.

Among technology companies, TSMC shares are enthusiastically valued by Wall Street analysts. Out of six experts, the set gives it a strong buy rating and places its average price target at $99.50 per share. This is a 20 percent growth from the current point. At the same time, the analysts do not rule out a certain degree of volatility.

Although for many veteran investors the name of this company may not sound very familiar, it carries weight among younger investors. It is a company that creates video games and its repertoire includes the classic Grand Theft Auto (GTA). It also includes the Red Dead Redemption franchise.

But the company’s strategy is also flawed.

Among the problems is that it concentrates all its strength on successful franchises, which take time to develop due to their complexity. Between releases, the company releases updates and add-ons to keep players glued to their screens. Either way, TTWO is the queen of legendary games.

Its shares have also felt strong jolts, as in the case of the exit of Zynga, the firm with which it boosted its presence among mobile games. Upon learning of the withdrawal, the shares lost -15%. Similarly, analysts expect TTWO’s net bookings to fall by $5.4 billion to $5.5 billion in 2023 from $5.77 billion. The turbulence is a combination of economic conditions and internal company changes.

Alongside those uncertainties there is a strong point that this is one of the most capable companies whose shares are -50%. This is an ideal time for investment considering that the next GTA release is still a long way off.

Wall Street analysts have a deep love for TTWO stock, which is expressed with 18 buy and 4 hold ratings. They place the average price target at $137.10 or 29.65% as of now.

One should not lose sight of the fact that the immediate outcome on the stock price of these companies depends on the decisions of the FED. In less than 10 days the Federal Open Market Committee (FOMC) will meet to define the next upward move.

In turn, the magnitude of that rate hike will depend on the unemployment numbers to be released on Thursday. If the jobless rate rises, expectations for a moderate rate hike are likely to be fulfilled. That would usher in a nice holiday rally in many stocks.

For the stocks of the companies reviewed, this likely rally would be an opener that would usher in the expected green numbers of 2023. Nevertheless, the Christmas rally should not be taken for granted, as this year’s macroeconomic figures have not been entirely consistent with forecasts.

The content of this article is purely informative and does not constitute an investment guide.