What will happen to Russian gas in the near future?

Russia's gas production will be directed through new routes to China. Both countries are moving towards this goal. 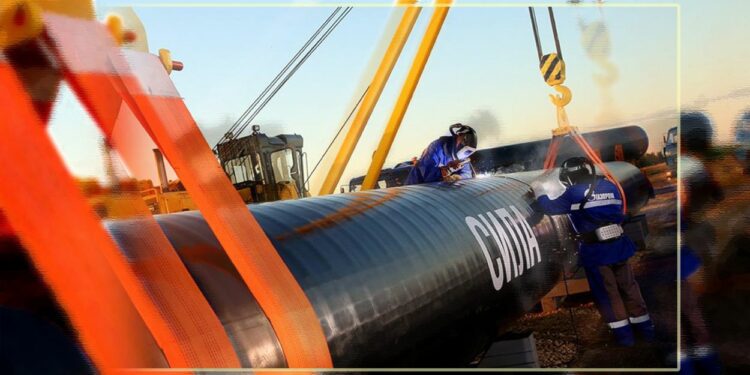 Europe will stop buying Russian natural gas and then Moscow will have no one to sell it to and that will lead to a crisis. That seems to be the urban belief of what will happen in this economic struggle between the two nuclear blocs. But the reality goes far beyond that assumption, since Russia has been preparing for years for such a scenario.

A war would bring consequences and hostile acts from European countries towards Russia, and the Slavic country’s authorities were well aware of this. Hence, the failure of many sanctions would be determined not because they were wrong, but because the Kremlin was waiting for them. Alternatives to SWIFT, the purchase of gold, the withdrawal of Western bank reserves and the construction of the gas pipeline to China are just some of the preventive moves.

The last of these projects is one of the most notable. This is because it represents a power card for Russia vis-à-vis its European partners. Simply put, in order to stop depending on Moscow’s gas, Europe must build from scratch the alternatives. In the meantime, Russia should only cut shipments through Nord Stream 1 with the assurance that there is another pipeline to China that will allow it to reduce the impact of running out of Western customers.

While Russian gas was poised to flow in greater quantities to Europe, that plan collapsed with the shutdown of Nord Stream 2. Similarly, the decline in shipments through Nord Stream 1 appears to mark a definite trend for the end of an era of trade. The result will leave a recessionary Eurasia and Moscow sending that resource to its main partner, China.

Parallel to the construction of Nord Stream 2, the Russian and Chinese authorities have been building a gigantic gas pipeline in Asia. Specifically, it is the Power of Siberia, which began pumping gas to the northern part of the Chinese territory in 2019, according to Global Times. By 2025, the third and final phase of the project will be completed. Likewise, the authorities of both nations are already working on a Power of Siberia 2, which would begin to be built in two years and in which Mongolia, the country through which the pipeline will pass, would participate.

Thus, the two countries most uncomfortable for the West seem to be working together to achieve common goals. To make natural gas flow from Siberia to Shanghai would become one of the most ambitious projects of the 21st century in terms of natural resource trade. It is not only the monumental task of crossing Siberia. It also crosses the entire eastern side of China, passing through Beijing and reaching Shanghai, where the Russian gas will be able to reach.

As already noted, the first phase of the pipeline was completed in 2019. The second phase began operations in December 2020 and the third and final phase will take place by 2025, when shipments will reach Shanghai.

The companies behind the work

The gigantic infrastructure to transport gas from Siberia to China is in charge of the companies Gazprom and China National Petroleum Corp. It should be noted that the work has been carried out jointly for eight years. This is the same period as the beginning of the civil war in Ukraine and the first sanctions against Moscow.

The construction of the gas pipeline is one of Russia’s main preparations for the imminent action of Europe to stop buying its resources. Consequently, the European Union authorities announced earlier this month that they would divest 2/3 of their gas imports from the former Soviet country. As far as China is concerned, the Chinese government would not be willing to pass up the opportunity to take Europe’s place.

According to Reuters, Russia’s investments in this project amount to some $55 billion. This includes the construction of infrastructure and the creation of new sources. Once arrived in China, the Russian gas will circulate along the lines created by the Chinese company (CNP) to transport the resource along nine provinces of Beijing-controlled territory.

According to the same portal, within 30 years the Power of Siberia 1 would carry some 38,000,000,000,000 cubic meters of gas to China. It is also noted that there is progress in the so-called “western field”, which would connect the operational fields with China.

Since Russia began to establish itself as a serious rival to the West, China has welcomed it with open arms. Beijing has long-term plans to become the world’s leading power over the United States. This is no easy task and one in which it needs powerful partners to move forward. This means that its booming growth rate demands natural resources.

Moscow looks like a dream partner for a country with China’s goals. Especially if the sale of natural resources is done at deep discounts. Since Western sanctions were applied to Russia and China started buying cheap resources, inflation in the Asian country has dropped. The partnership between the two countries seems stronger than ever and shipments are on the rise.

In that sense, Beijing’s purchases of Russian gas increased significantly in the first half of the year, according to data published by CNBC. Over the course of a year, shipments nearly tripled to $1.66 billion. Although China’s gas purchases from Russia are not as large as those from Turkmenistan, the pace of growth is still striking.

On the other hand, it is noted that China is not a large buyer of gas, since it has large coal reserves from which it generates its energy. However, the Communist Party’s plans stipulate that by 2060 the nation will be coal-neutral. This implies that, in the immediate future, projects towards less polluting forms of generation will increase.

The West pushed for the two countries’ interests to merge

Until recently, China’s economy and commercial and technological power was a problem for U.S. dominance, on the one hand. On the other, Russia’s military power and geopolitical influence was a headache as well. The two separately were at loggerheads, but now seem to be becoming a more united and compact bloc.

This alliance could also include India, a country with a lot of misgivings about China, but with close sympathy for Russia. In any case, the ties between Moscow and Beijing seem to be getting closer and closer, which is expressed in the growth of trade numbers. And this is not just about the purchase of Russian gas, but about a wide range of resources that greatly benefit the Kremlin.

Among the most important data it stands out that from January to May the trade turnover between Russia and China increased by more than 28%. The latter compared to the same period last year, which means that it now exceeds $65 billion.

Exports of goods from Russia to China during the first 5 months of 2022, compared to the same period of 2021, increased by 46.5% and reached $41 billion. Meanwhile, exports from China to Russia totaled $24.5 billion, up 7.2%, giving Moscow a healthy positive balance in its trade with China. These data were taken from the Gisreportsonline.com portal.

In parallel, these two countries move a number of national blocs such as the African Union or a large part of the nations of Ibero-America. As for the latter, many of them have declared themselves against the war, but do not dare to condemn Russia. Similarly, the countries of the Middle East maintain close ties with Russia. Even countries hostile to each other, such as Saudi Arabia and Iran or Turkey and Israel, have in common their friendship with the Eurasian country.

The latter, precisely, is an expression of the Russian geopolitical power mentioned above.

Another important facet of the partnership between the two powers is collaboration in the area of nuclear energy. In May 2021, the leaders of the two nations met to sign agreements for the construction of two plants in China. This would be another of Beijing’s steps to advance in the generation of energy by means other than coal.

Apart from the money China sends to the Russian coffers for its resources and projects, there are also other benefits for Moscow. This is where the key agreements in the area of technology come in. When sanctions were applied to Russia at the end of February, there was talk that the country would be isolated and unable to buy technology to modernize its industry.

“Since the beginning of the conflict, New Delhi has accelerated oil imports from the Russian Federation.”

However, the alliance that provides for the passage of Russian gas also has a return door for technological products. Thus, Chinese companies, some openly and others with a low profile, are flooding the Russian market with products such as computers, chips and cell phones. The country is also importing cars. Similar technological agreements have also been entered into with India.

India is another country that has flatly refused to condemn Russia’s invasion (also called special military operation) in Ukraine. Since the beginning of the conflict, New Delhi has rapidly increased oil imports from the Russian Federation. According to Reuters, this move by India is necessary in order not to fall behind China.

Likewise, the sanctions against Iran have considerably damaged the Indian economy and the authorities do not intend to allow this to happen again with Russia.

Fact: India-China relations were never fully repaired after the 1962 war. Since then, the two countries have been engaged in a border dispute that often results in skirmishes between the two armies.

The alliance for the conquest of the Arctic

One of the issues attracting less attention is Russia and China’s ambitious military and commercial projects in the Arctic. As global warming melts, the two nations seem to have discovered a new Mediterranean. The trade routes from China and the dominance of the Russian fleet could make the place a perfect square to overthrow the commercial power of the West.

“The Chinese and the Russians are all over the Arctic,” U.S. Secretary of the Navy Kenneth Braithwaite recently told the Senate. “Especially the Chinese. We should be alarmed by the increased Chinese activity off the coast of Norway in the High North and we need to be vigilant about that. We need to understand why,” he remarked.

The importance of this new route opened up by the thaw is far-reaching. From the city of Kirkenes (the northernmost part of Norway) and across the top of Russia to China, goods from the Asian country reach Europe much faster. In Braithwaite’s words, the time is halved compared to current routes.

With this in perspective, it can be understood that Russian gas is just one of many elements at play in bilateral relations. The expansion of trade in Chinese products with shorter routes could shake US dominance not only in the Pacific, but in Europe itself, and that would happen in the not too distant future.

Meanwhile, according to the West, Russia has the luxury of using gas as a weapon to induce recession in Europe in retaliation for sanctions against it in support of Ukraine.