The two mobile operating system giants have a long-standing dispute over messaging models. 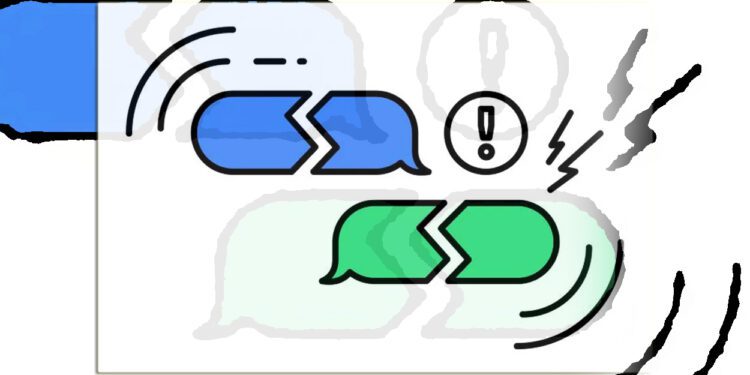 A controversy between titans is unfolding in the tech arena and it revolves around the color of a bubble. It is not as banal as it sounds, but of a possible monopoly issue by Apple and which is being exploited by Google. The incompatibility of messaging services on iPhones with respect to Android phones is putting pressure on the first of these companies.

But the pressure from the creators of the Android system seems to show no signs of abating, quite the contrary. In a statement published on the official Android site, the apple company is accused of creating a poor experience when mobiles with both operating systems exchange text messages.

Google’s complaint against Apple is challenging

The center of the controversy that Google is holding against Apple has to do, as mentioned above, with the text messaging system. When users of iOS, the operating system of iPhones, send messages to users of cell phones with the Android system, the texts arrive distorted in different ways.

As aresult, Google executives are demanding that the iMessage messaging model be modified with RCS, which is a standard model. The latter would allow better compatibility between mobiles with these antagonistic operating systems. But Apple seems to be unwilling to take this step for reasons that could be described as monopoly, or at least that is what Google implies.

Therefore, Google’s accusations point to the fact that its rival intends to keep its users prisoners of its products. Implementing RCS would allow all cell phones, regardless of operating system, to be compatible with each other. Until they do, users of both types will be plagued by bad communication experiences that are perfectly fixable. “We hope that Android users will stop being blamed for ruining chats,” the aforementioned statement said.

Google’s accusation is extremely aggressive against its competitor and even the title of the post notes, “It’s time for Apple to fix text messaging.” Google’s global president for integrated platform marketing, Adrienne Lofton, was emphatic. “Apple is responsible here and it’s time for them to take responsibility,” she said.

The Android maker’s campaign has been escalating and it is likely that the targeted company will have to bow to mounting pressure.

The magnitude of the two contenders

The dominance of these two companies over the use of operating systems in the world is practically total. With minor exceptions, all smartphones on the planet run either Android or iOS. According to the StatCounter portal, quoted in CNBC, the U.S. market is dominated by Apple by 54%.

The Alphabet-dependent company insists that its competitor must adapt RCS in its system. This would allow greater compatibility. It is noteworthy that cell phones based on the Android system use the most important compatibility service, RCS, and are leaving SMS behind. These standard systems are used by companies of different brands to manufacture devices that are compatible with those of the competition.

It can be said that, if a brand refuses to use a broad system, the owners of their devices will be locked out from their contacts using other brands. The problem is that handset holders are generally loyal to carriers and are unlikely to be willing to switch. The result is that a communication problem would be created that is not related to technological failures.

That is precisely Google’s accusation against Apple. The latter would have no interest in withdrawing its model given the powerful market it covers in the United States. WhatsApp’s own parent company, Meta, claims that it is a direct competitor of Apple, while the iMessage service is one of the most widely used in that country.

The outcome of this dispute could be decided among legislators and it would be a painful scenario for the creator of iPhones.

It would not be surprising if Apple is targeted by the creators of laws related to fair competition. Indeed, legislation such as those in the U.S. and the European Union (EU) are taking steps to prevent technology monopolies from stifling competition. The laws aim to make tech services compatible for the sake of consumers.

“Apple can adopt RCS, the modern industry standard for these sub-processes. Solving the problem without switching your conversations from iPhone to iPhone and improving messaging for everyone” – Google

In that arena, Apple already have a track record in the EU. For example, in the Netherlands, the competition authority reportedly ordered the company to open its app store to creators from other stores. However, the company, as reported by this media, has not responded and chooses to pay the fines imposed, which is more profitable for it.

The EU’s executive vice president for competition, Margrethe Vestager, notes that there are two additional cases against the company. One of them has to do with the music streaming service and the other with Apple Pay. In any case, Apple is not the only company with problems within the European jurisdiction; Google and Metaalso have accounts pending before the bloc’s regulators.

It is noteworthy that all Apple cases have to do with the same root, which is refusing to open its services in terms of compatibility. For example, in the case of the App Store, application creators must pay high fees to the company as this is the only place where their apps will be available to users. The company’s management says it does this to protect the privacy of the people who use its services.

Apple’s customers are blocked by the company itself

Another issue that makes the conflict between the technology companies more bitter has to do with leaked documents. Lofton thus accuses its rival of keeping its own users blocked, based on emails that were made public during a lawsuit last year in the Epic case.

In those emails, senior Apple executives reportedly exchanged compromising conversations on this very subject. In their own words, the executives are feuding, with one of them denying that it would be beneficial to bring the iMessage app to support Android OS handsets.

“I am concerned that iMessage on Android will serve to remove an obstacle for families with iPhones to give their children Android phones,” one of the executives, Craig Federighi, said in the aforementioned emails. That conversation dates back to 2013. At that time, the current VP of software and services, Eddy Cue, proposed to create a compatibility care team. However, his interlocutor flatly rejected his intentions.

By 2016, Apple’s Phil Schiller would have pointed out that the “expansion of iMessage will hurt us more than it could help us.” As can be seen, this is a long-standing issue that could have an upcoming outcome if Google increases public pressure on Apple.

According to the accusing company, the iMessage application converts messages sent from its devices to Android into SMS and MMS formats. These are technologies that are now obsolete.

The 2013 emails between Federighi and Cue

The problems for Apple are enormous, inasmuch as the text of the aforementioned emails is more than a testimony. To put in context, the conversation between company executives Eddy Cue and Craig Federighi in 2013 centered on the rumor that Google would buy WhatsApp. As a result, Cue was concerned that, with them having a superior messaging app, they would have to cede ground to Google in the chat area.

The exchanges between the senior executives are quoted below with minimal modifications to make the text more understandable:

Cue: We really need to bring iMessage to Android. I have a couple of people looking into this, but we need to go full speed ahead and make this an official project… Do we want to lose one of the most important apps in a mobile environment for Google? They have search, mail, free video and are growing rapidly in browsers. We have the best messaging app and we should make it the industry standard. I don’t know how we can monetize it, but it doesn’t cost us much to execute.

Federighi: Do you have any thoughts on how we would make the switch to iMessage (from WhatsApp) attractive to the masses of Android users who don’t have many iOS friends, iMessage is a good app/service, but to get users to switch social networks we need more than a marginally better app. (That’s the reason Google is willing to pay $1 billion, for the network, not the app) … In the absence of a strategy to become the primary messaging service for the majority of cell phone users, I worry that iMessage on Android will simply serve to remove an obstacle for iPhone families to give their kids Android phones.

In the midst of this dilemma that has been going on for almost a decade now, what is surprising is Apple’s silence on the issue. All of the portals consulted for this work note that they tried to communicate with the company and received no concrete answers or no communication at all.

Meanwhile, the company continues to add new features to iMessage, which increases the sympathy of its users for “exclusivity”. It should be noted that the bubble theme has permeated deeply into pop culture and songs have even been dedicated to the superiority of blue bubbles over green bubbles.

This difference is because iMessage detects when messages are sent to another iPhone and the network is deployed to its full potential. Thus, texts arrive in a blue bubble instead of the green SMS bubble. At the other extreme, Google remarks that it does not want the iMessage app on Android phones. It is simply asking its rival to adopt the RCS standard system.

As long as the company that created the iPhone remains silent, Google will use all its communication potential to try to embarrass it. It should not be overlooked that, generally speaking, any insinuation by one company to accuse another of monopoly is delicate and the accused would not be slow to respond. In this case, Google’s tone seems to be getting louder while Apple prefers to keep quiet.

The social networks are also a battlefront where Google executives have not missed the opportunity to attack.